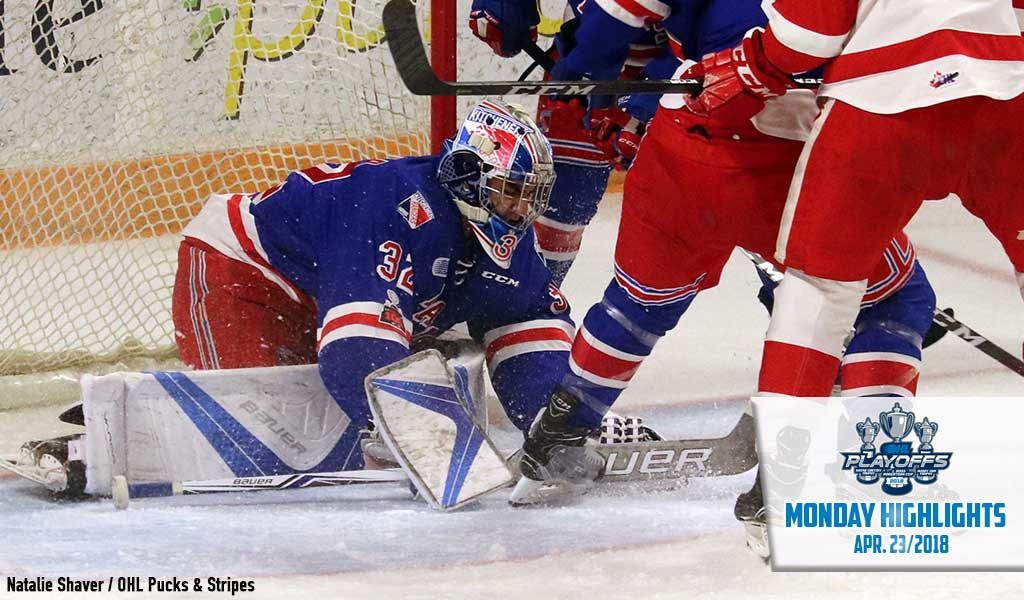 The CHL’s top-ranked Sault Ste. Marie Greyhounds were shutout for the first time all season on Monday, running into Mario Culina and the Kitchener Rangers on home ice as Game 3 went to the Blueshirts by a score of 3-0.

Rookie blueliner Michael Vukojevic finished the night with three assists while Culina was steady when called upon, turning in a 24-save shutout.

The Kitchener win came before a big crowd of 6,567 at The Aud.

“It’s nice being home,” admitted Rangers head coach Jay McKee. “Obviously you have the line matching advantage and we have great support here with our fans. They’re great throughout the season and they take it to a new level in the playoffs. We certainly get energized playing in front of our home fans and I thought tonight was a good game. Every line was going, our guys were competing and we found a way to win finally.”

The victory was Kitchener’s first in seven tries against the Greyhounds throughout the regular season and playoffs. The Rangers won 63 percent of the game’s faceoffs as Logan Brown and Greg Meireles were a combined 15-for-20.

Sault Ste. Marie netminder Matthew Villalta made 37 saves in the loss as his club carries a 2-1 series lead into Game 4 back at The Aud on Wednesday night.

“It was a tight game right to the end,” said Hounds head coach Drew Bannister. “we get a bad bounce on the second goal where it goes off the glass to the guy standing in front of the net. At the end of the day our inability to create offence five-on-five and our inability to score on the power play was the difference.”