Murphy making the most of draft day opportunity 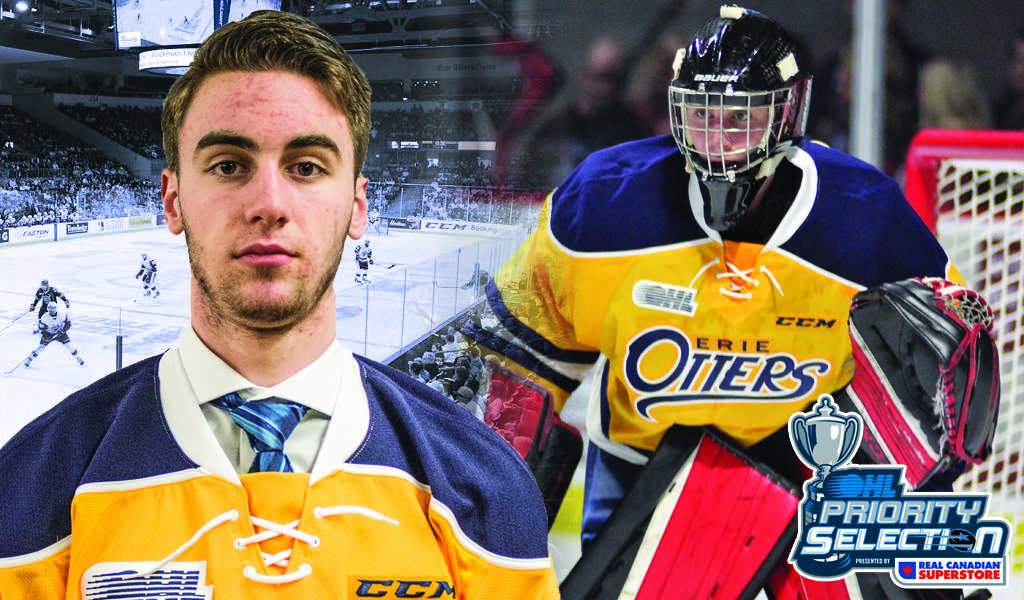 Daniel Murphy waited all day, watching as name after name popped up on the screen in front of him. The 2016 OHL Priority Selection had gotten underway six hours prior with the selection of smooth-skating defenceman Ryan Merkley going to the Guelph Storm.

As the day stretched into the late afternoon and the 15th round got started, it seemed as though hope was fading. The Erie Otters, the one team he’d been in touch with leading up to the annual Priority Selection, had one pick left on the board and it was #301, the last selection of the entire draft.

Murphy, who grew up playing in his hometown of Waterford, Ont., made the jump to AAA in his Minor Midget season when he joined the ALLIANCE’s Brantford 99ers.  He’d attended a development skate with the Stratford Cullitons Jr. B club months earlier, making a connection with team goaltending consultant and Otters Southern Ontario scout Mark Nelson.

“He wasn’t making any guarantees, but he did give me the impression there was some interest there,” recalled Murphy. “My coaches in Brantford had told me that a couple other teams had asked questions, but I wasn’t really expecting to see my name appear on the screen.

“Sure enough, it did, at the last possible second.”

Murphy’s hard work had paid off as the Otters selected him with the 301st and final pick of the 2016 OHL Priority Selection. While he wasn’t even the first goaltender the Otters selected that day, the 6-foot-2, 185Ib. Murphy was inspired as he set his sights on the road ahead.

“I think it motivated me more than anything,” he noted. “Just to know that a team liked me enough to use a pick on me was more than I expected and it kind of gave me a new perspective.”

After attending training camp with the Otters, Murphy returned to Brantford for a season of Midget AAA where he posted an 11-8 record with a 2.74 goals-against average over 23 regular season contests. He elevated his game in the postseason, backstopping the 99ers to an appearance in the league final with a 7-3-1 record, 1.53 goals-against average and two shutouts over 11 outings.

Murphy returned to Erie for another impressive training camp before making the jump to the Tier II ranks. His strong Midget showing in Brantford the year prior had caught the attention of the Mississauga Chargers Jr. A club who brought him into the fold and quickly reaped the benefits as Murphy posted a 2.96 goals-against average, .917 save percentage and 7-8-3 record with four shutouts over 19 games as a 17-year-old rookie.

Back in the Flagship City a rebuilding Otters club had recently lost the services of overage veteran Troy Timpano due to injury and were in the market for a goaltender. That’s when Murphy got the call.

“Yeah it was exciting, just to have that chance and to see all the work you’re putting in pay off,” he reflected. “I think it set in pretty quick how good the players in this league are and it has challenged me to keep working to raise my game to the next level.”

Murphy made 36 saves in his OHL debut, a 4-3 road loss to the Windsor Spitfires on December 7th. He earned his first career OHL win later that month on New Year’s Eve at home to the Kingston Frontenacs, making 33 saves in a 3-2 triumph.

Other season highlights included Murphy’s first OHL shutout that came on February 19th before family and friends in Guelph where he made 28 saves to help the Otters blank the Storm 4-0.

“Every year you have to do a little bit more than you did the year before,” he said, looking back on his first OHL campaign. “I wasn’t so sure I was going to get into one OHL game this season let alone 26, but going back to Erie for next season I’m going to have to work hard to earn my minutes and it’s a whole new challenge.”

Though he, along with recently graduated Flint Firebirds captain Jalen Smereck (final pick of the 2013 OHL Priority Selection) have become answers to a challenging OHL trivia question, Murphy looks back on his draft day with pride, knowing that he went into it with the right mindset.

“As far as I was concerned, drafted or not I was going to work hard to try and be better for the next year,” he said. “I think getting picked gave me a little boost and it motivated me, but I wasn’t really sure what to expect and I wasn’t going to let it stop me from pursuing my goals if I didn’t get taken.”

A 15th round, 301st overall pick who cites his admiration for Carey Price’s calm demeanour and Andrei Vasilevskiy’s technically sound approach, Daniel Murphy is back to work, pursuing a new set of goals for next season.