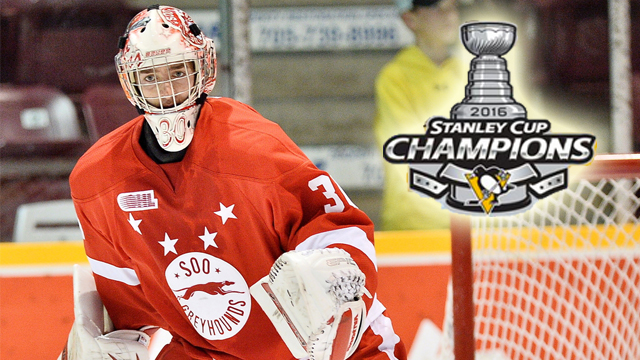 After a four-year OHL tenure with the Sault Ste. Marie Greyhounds from 2010-14 and a record-setting AHL campaign last year, Matt Murray hoisted the NHL’s most prized possession in San Jose on Sunday night, leading the Pittsburgh Penguins to Stanley Cup glory.

Murray was fantastic throughout the playoffs, stepping in for an injured Marc-Andre Fleury early in the postseason before putting together a 15-6-2 record with a 2.08 goals-against average and a .923 save percentage with one shutout over 21 games.

Murray made 18 saves to backstop the Penguins to a 3-1 Game 6 win on Sunday, giving them their fourth Stanley Cup title in franchise history following championships in 1991, 1992 and 2009.

Always make the most of your opportunities. #StanleyCup pic.twitter.com/74N1rEEZFa

“You grow up thinking about this stuff, getting to raise that Cup,” Murray said post-game. “It was a lot heavier than I thought it was. What a moment. I blacked out when I raised that thing, to be honest.”

Murray becomes the first OHL graduate to be the playoff starting goaltender of a Stanley Cup champion since Bernie Parent 41 years ago with the 1975 Philadelphia Flyers. He was joined in the celebration by fellow OHL grads in teammates Trevor Daley (Sault Ste. Marie Greyhounds), Olli Maatta (London Knights) and Tom Kuhnhackl (Niagara IceDogs).

“I probably won’t believe this was real until at least I don’t know. Who knows?” Murray continued. “I’m just enjoying the moment right now like I was trying do all playoffs long. This is when you get to really enjoy things.”

Murray’s rise to prominence has been a quick one following his final year with the Greyhounds in 2014 when he set a single-season franchise record with six shutouts.

The lanky 6’4″, 178Ib. goaltender turned heads as a rookie in the American Hockey League last season, earning the Aldege “Baz” Bastien Memorial Award as AHL Goaltender of the Year. Murray recorded a 1.58 goals-against average, a .943 save percentage and 12 shutouts over 40 games, the second-best marks in the 80-year history of the AHL. The memorable 2014-15 campaign was highlighted by a 304 minute and 11 second shutout streak, a stretch that included four consecutive shutouts to set a new AHL record.

The former third round pick by the Penguins in 2012 split this past season between the AHL and NHL, making his NHL debut on December 19th against Carolina and went on to make three more starts before being sent back to Wilkes-Barre/Scranton. He made his permanent return on February 27th and finished the regular season with a record of 9-2-1, a goals-against average of 2.00 and a .930 save percentage.

He proceeded to put together an unforgettable playoff run, earning the respect and admiration of his coaches and teammates in the process.

“One of the things I really love about him is his makeup because I think of all the positions in the game that’s the one you need it the most,” Penguins head coach Mike Sullivan said of Murray. “You’re the last line of defense and you let in a goal that, hey, maybe everybody thinks you should have had. A lot of young players it affects and rattles their confidence. Matt has a demeanor about him that he doesn’t let it affect his next save.”

For Murray, his approach has always remained pretty simple.

“There’s no secret to it,” Murray said of his success. “I just tried compete every time on the ice and that’s what I was able to do.”

Written with files from Tom Gulitti at NHL.com.