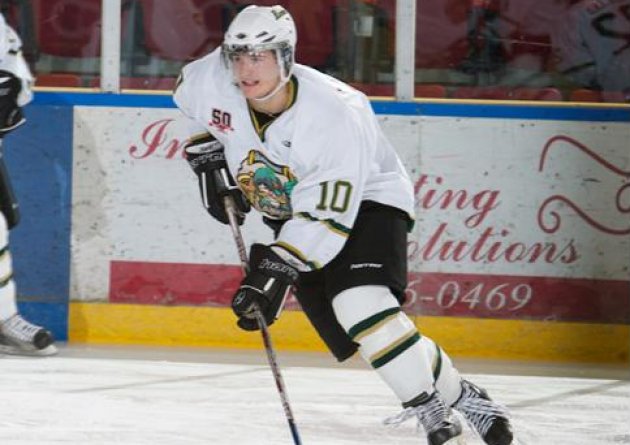 The Sudbury Wolves are pleased to announced that 17-year-old forward NATHAN PANCEL has agreed to terms with the OHL club and will join the Wolves at practice on Wednesday and will remain with the club for the duration of the play-off season.

Pancel, 17, was selected by Sudbury in the 5th round of the 2010 OHL Draft, 97th overall.  The Orleans, Ontario native had an outstanding season in the CENTRAL CANADA HOCKEY LEAGUE (CCHL) this year where he led the Gloucester Jr. A Rangers with 37 goals.  Pancel added 25 assists for 62 points in 59 games.   Pancel, 5’10, 180 lbs left-winger, finished the regular season as the highest-scoring 16 year old player in the CCHL.  He was named CCHL Rookie of the month on two occasions and CCHL Player of the Month for February.  He was also named CCHL Player of the Week in March and most recently named CCHL ROOKIE OF THE YEAR!

Pancel continued his scoring heroics in the post-season where again he led his team in goals with 6 goals in 10 play-off games.   Pancel recorded a hat-trick and a four point game in the play-offs against Carlton Place Canadiens who the Rangers eliminated in six games in the opening round of the play-offs.   The Rangers were swept four-straight by the first-place LUMBER KINGS in the second-round of the play-offs but Pancel scored a goal in three of the four games played against Pembroke.  Pancel finished the post-season second in team scoring with 13 points in 10 games.

“We have added a very dynamic forward to our team” notes Wolves’ President/GM Blaine Smith.  “Nathan is one of the best 16 year old players in the Province and our fans are going to enjoy watching Nathan play here in Sudbury over the next three seasons.”

“Nathan was receiving a lot of interest from NCAA schools and we felt that we needed to put our best foot forward and recruit Nathan now as opposed to waiting until the summer” notes Smith.   “Pancel can score goals, he can make plays, he sees the ice extremely well, and he plays with an edge.  He is very focused on his hockey career and he loves to win.  He is exactly the type of player and person that we need to help us build a championship team.”

“I am really excited and honoured to join the Sudbury Wolves organization” notes Pancel.  “I’m coming to Sudbury now so I can learn, practice, support my new teammates and help the team any way that I can.”

Pancel was flattered by the attention that the Wolves’ organization paid to him in the last few weeks.  “I was looking to make my decision in the off-season when I had more time to check-out both options (OHL vs NCAA) but the Wolves’ made it pretty difficult for me to say no after their owner (Mark Burgess), manager (Blaine Smith), assistant manager (Ken MacKenzie), head coach (Trent Cull) education advisor (Gord Ewin) and area scout (Sean Howard) all came to meet with me and my family and address any concerns that we had.”

Pancel added, “It also didn’t hurt that Nick Foligno (former Wolves’ captain and Ottawa Senators forward) met me recently at a Wolves’ game in Ottawa and suggested how important it was to his NHL career to develop under the Sudbury Wolves’ system and be a part of the Wolves’ organization.   It’s obvious that the Wolves organization is very  ‘family-oriented’ and I am very proud to become a part of it.”

Wolves’ fans can meet NATHAN PANCEL for the first time Wednesday night at the Sudbury Arena when the Wolves’ host a FAN PLAY-OFF RALLY from 5:30 –

Wolves’ fans will also be able to reserve their seat for the remaining games of the play-offs by placing a non-refundable $100 deposit down towards next year’s season ticket seat.  Wolves’ management and staff will also be on hand at the FAN PLAY-OFF RALLY to greet fans and answer any questions about Wolves’ seating packages.

CCHL ROOKIE OF THE MONTH – DECEMBER

CCHL PLAYER OF THE MONTH – JANUARY

CCHL ROOKIE OF THE MONTH – FEBRUARY

CCHL PLAYER OF THE WEEK    – MARCH