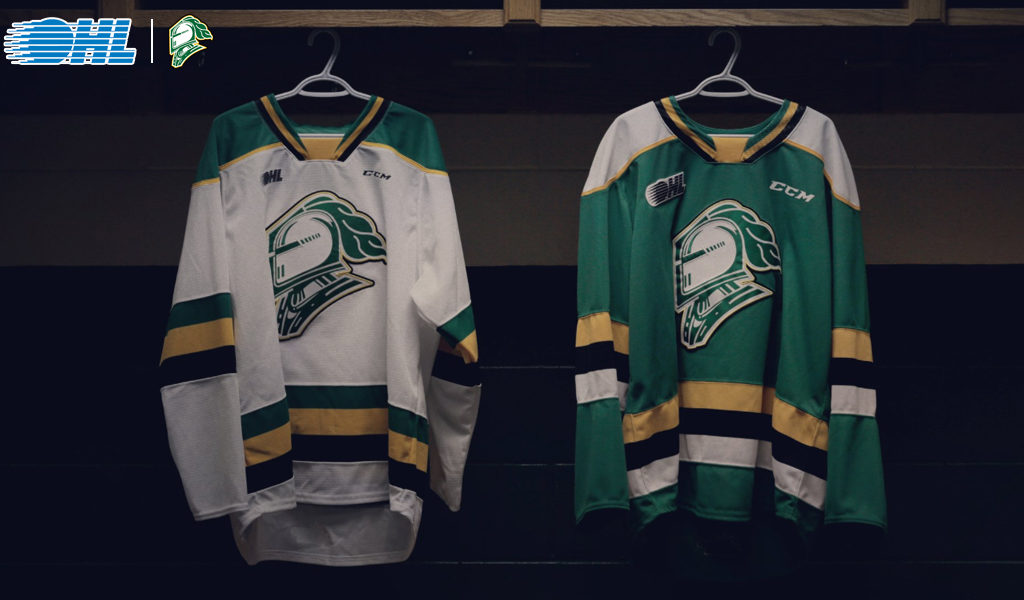 After unveiling their new logo for the 2019-20 season last week, the London Knights held a press conference Monday morning revealing their new uniforms for the first time.

The Knights have turned back the clock, capturing the late 80’s and early 90’s colour scheme of the franchise paired with glimpses of their 2005-era logo as they enter their 55th season in franchise history and 20th under the ownership of Mark and Dale Hunter.

“This is the tenth logo that we’ve had in the history of the London Knights,” he continued. “There are so many players that have come through. You can talk about the sweater but what represents the sweater is the players.

“The history of players like Brendan Shanahan and Jason Allison before 2000 and names like Corey Perry, Rick Nash, Patrick Kane and Mitch Marner after that, they all represent winning.”

The Knights have won 40 games in seven of the past eight seasons and have qualified for the OHL Playoffs 19 years in a row, winning four OHL Championships and two Memorial Cup titles in that span.

We brought back the house of green! The @GoLondonKnights are an iconic brand in London, especially the 2005 Memorial Cup team. We wanted to bring back that classic palette with a few tweaks to update the look. We are looking forward to the 2019/20 season with the #NewKnight pic.twitter.com/ZInJoSqlCW

The new logo and uniforms bring together elements from all throughout the team’s decorated past.

“The fans love that sweater and the legacy of that sweater in the community, here and around the world, is huge.”

For more on the extensive history of the London Knights, visit londonknights.com.