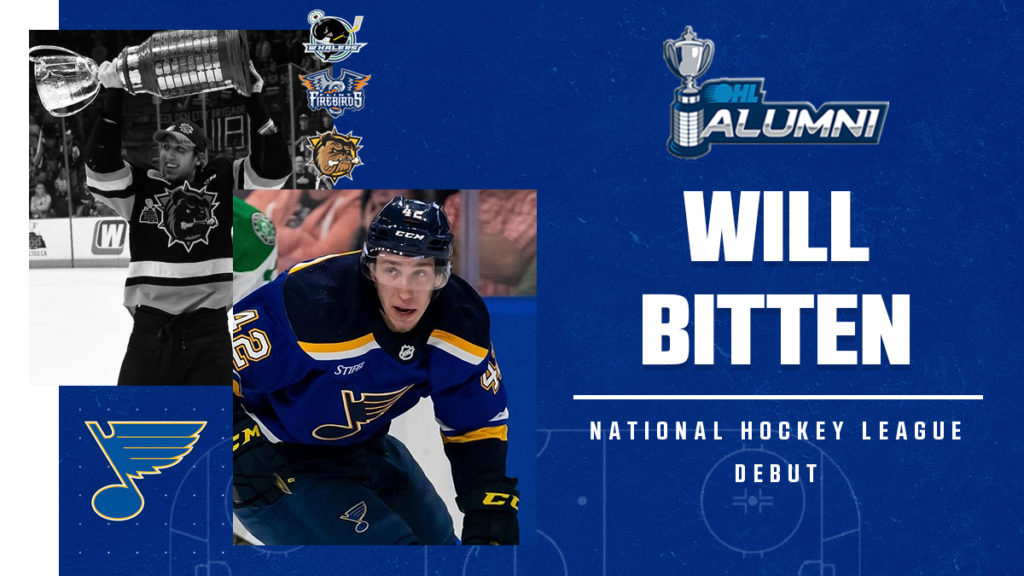 An energetic spark-plug in his days with the Plymouth Whalers, Flint Firebirds and Hamilton Bulldogs, Will Bitten‘s hard work has carried him into the National Hockey League. The 24-year-old Ottawa, Ont. native made his debut on Saturday, suiting up for the St. Louis Blues as they fell 6-2 in Pittsburgh. Bitten saw 6:18 of ice time and threw three hits in his first game of NHL action.

Originally the seventh overall pick of the Plymouth Whalers in the 2014 OHL Priority Selection, Bitten scored 15 goals in his 16-year-old season, increasing that total to 30 as a sophomore with the Flint Firebirds in 2015-16. The Montreal Canadiens took notice, selecting Bitten in the third round of the 2016 NHL Draft. He played his final two seasons with the Hamilton Bulldogs, helping guide them to an OHL championship in his final season as he recorded 11 points (4-7–11) in their march to the J. Ross Robertson Cup.

Bitten, whose younger brother Sam played for the Ottawa 67’s and Sarnia Sting, has made a few stops in his minor league career. He was traded from Montreal to Minnesota in October 2018. Following parts of four seasons with Minnesota’s AHL affiliate in Iowa, he was on the move once again in December 2021, being acquired by the St. Louis Blues. Bitten helped the AHL’s Springfield Thunderbirds reach the Calder Cup Final last season, recording 21 points (8-13–21) in 18 playoff games. So far this season, he’s put up 10 points (8-2–10) in 20 games with Springfield before getting the call to the big club.

Deep breaths, kid. This is a big moment. #stlblues pic.twitter.com/mGTPlLJGdi