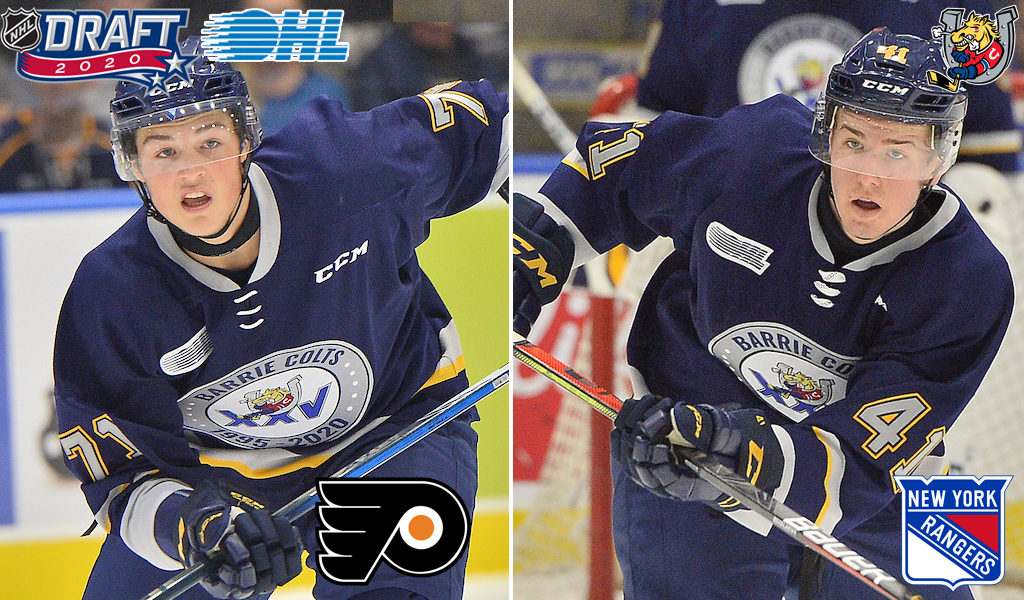 The organization was well-represented at the 2020 NHL Draft in 23rd overall Philadelphia Flyers pick Tyson Foerster and fifth round choice of the New York Rangers, Evan Vierling. Upon hearing their names called, both made a point of thanking the Colts coaches who have helped them along the way.

Foerster, who recently signed an entry-level contract with the Flyers, led a young Colts lineup with 36 goals and 80 points over his breakout sophomore season. With his on-ice acceleration came a growing confidence, and after being claimed in the first round earlier this month, he thanked those within the organization who had a hand in helping him carve out his way as a rising prospect and a self-described vocal leader.

“Barrie’s been huge to me, especially Dale and Todd Miller, they helped me a lot through my career and they wished me the best so it’s been an amazing journey,” Foerster said.

“I want to thank them both and even Warren Rychel; they all had a different touch in my game. They helped me with everything, really.”

The Colts’ 2019-20 campaign saw a number of coaching changes and deadline deals, and the addition of Vierling was one of them. After being dealt to Barrie at the trade deadline in January from the Flint Firebirds, Vierling seamlessly stepped into the top centreman role, recording 34 points over 28 appearances. He, too, thanked the Colts for a productive conclusion to his second OHL stint and a smooth adjustment into their lineup.

“I stepped into Barrie and my teammates and coaches believed in me from day one and I was able to prove to them that I was able to put up numbers and be the top centreman so it worked out great,” said Vierling, who was selected 127th overall by the Rangers.

“This past season, someone who’s had a big impact on me was Todd Miller. He was awesome and he believed in me right when I arrived in Barrie and I couldn’t thank him enough.”

For Foerster, the opportunity to play 30 minutes from his hometown of Alliston in front of family and friends on a regular basis has always been special. He also spoke to the close friendships he’s made with his teammates over the past two seasons.

“I’ve made a lot of good friends. Some of them got traded, some of them are OAs. I miss them all and I’m excited to start with my new teammates and the same ones from last year,” he said.

“Dale Hawerchuk and Todd Miller helped me a lot through my career and they wished me the best. It’s been an amazing journey.”

Vierling shared a similar sentiment, citing his line mate Foerster as one of the close friends he’s made since joining the team.

“Me and [Tyson] are roommates on the road so to see him go 23rd overall to Philly was awesome and I think we have some really good chemistry and I hope we can continue that for years to come.”

In terms of goals for the upcoming season, both forwards are confident in the Colts’ ability to build on last season’s success.

“Hopefully we can go deep and go for a playoff run whenever the season starts,” said Foerster.

“My goal for next season is to go back to Barrie, have a big role there, have success as a team and hopefully go deep in the playoffs and eventually win an OHL championship,” Vierling finished. “I think we’re a young team with a lot of skill and I think our guys are going to be ready to go whenever the season may come so I think it’s going to be an exciting year for us.”