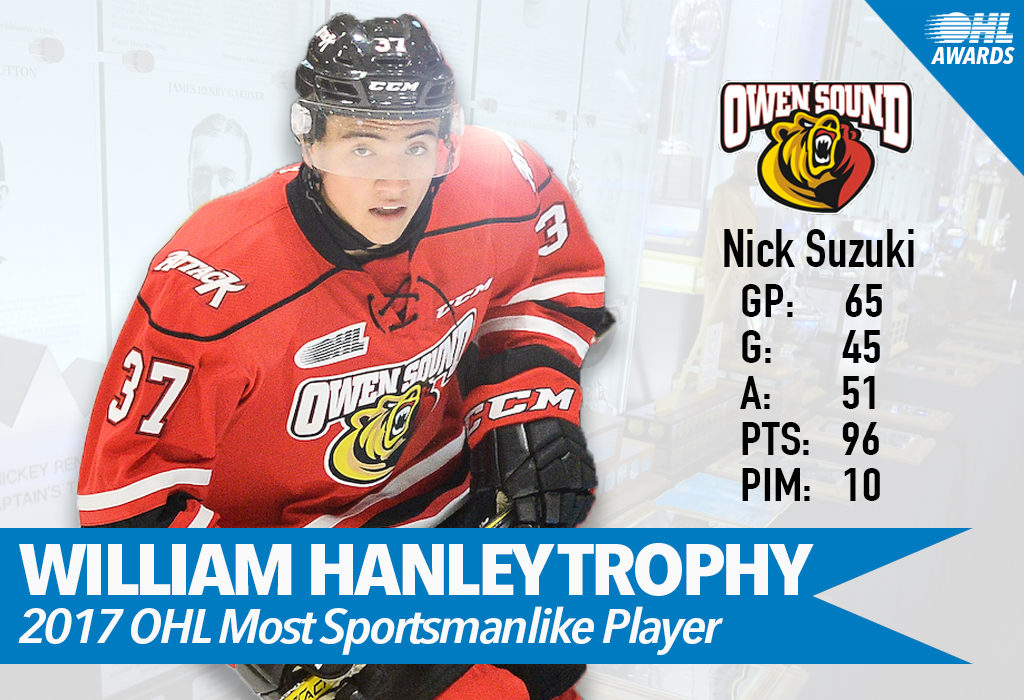 Toronto, ON – The Ontario Hockey League today announced that 2017 NHL Draft prospect Nick Suzuki of the Owen Sound Attack is the 2016-17 recipient of the William Hanley Trophy awarded to the OHL’s Most Sportsmanlike Player of the Year.

Suzuki finished fifth in league scoring with 96 points including 45 goals and 51 assists in 65 games played with a plus-minus rating of plus-51 that ranked seventh among all OHL skaters.  He recorded just 10 penalty minutes in 2016-17 which was fewest among the league’s top-10 scorers serving just one minor penalty during the final 26 games of the season.  He is the first Owen Sound player to receive the award following a season where the Attack secured franchise best marks of 49 wins and 102 points.

“It’s a big honour to be selected for this award,” Suzuki said. “I pride myself on being a good player by sticking to my game and staying away from taking penalties, and also being a good teammate and someone who is well respected on the ice.”

A 17-year-old from London, Ont., Suzuki is playing in just his second OHL season after being chosen by the Attack 14th overall in the 2015 Priority Selection.  This season he recorded 25 multi-point performances including a career-high six-point effort with a goal and five assists against his hometown Knights on February 17.  Suzuki was also recognized in the annual Western Conference Coaches Poll where he was voted second in the Best Stickhandler category, and was the Attack’s representative on the OHL’s Scholastic Team and finalist for Scholastic Player of the Year.  He is eligible for the 2017 NHL Draft and was listed 10th among North American skaters by NHL Central Scouting in their final rankings.

“The whole organization is extremely proud of Nick,” said Attack General Manager Dale DeGray. “He’s an elite player in an amazing league that has the respect of not only his teammates but his peers. From the moment he joined the Attack, Nick has approached and played the game the right way and there is no more deserving player for this award than him.”

Suzuki will be formally presented with the William Hanley Trophy at the 2016-17 OHL Awards Ceremony set for Thursday June 8 at the Hockey Hall of Fame in Toronto.  He will also be the OHL’s nominee for Sportsman of the Year at the Annual CHL Awards held as part of the Mastercard Memorial Cup festivities on Saturday May 27 in Windsor.