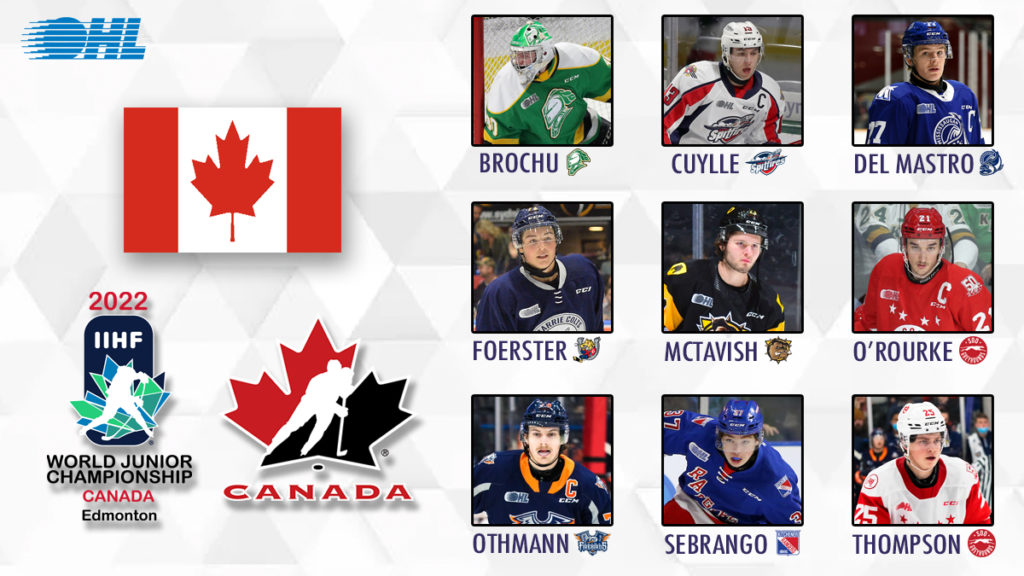 Canada has medaled in four of the last five tournaments, settling for silver in 2021 after dropping a 2-0 decision to the United States. The roster includes five players (Brochu, Cuylle, McTavish, O’Rourke, Sebrango) originally named to December’s National Junior squad prior to the tournament’s cancellation due to Covid-19.

“We have been working towards this moment for 13 months ever since we had our first summer camp back in July [2021],” said Canadian head coach Dave Cameron (Ottawa 67’s). “It has been a very long road to get to this point, there have been a lot of obstacles in the way, and the players and staff are very deserving to be where they are. I have seen the effort put in by everyone to get here, but we know tomorrow is not going to be easy. We are excited for the challenge.”

Jan Mysak (Hamilton Bulldogs) had a goal and an assist for Czechia in the loss while Pavel Cajan (Kitchener Rangers) stopped eight of the nine shots he faced in a relief appearance.

Canada will face Finland for gold on Saturday night at 8:00pm ET.

“I do not think we had as much energy as our previous games and we did not execute quick enough, which is something that made us successful against other teams,” said Canadian head coach Dave Cameron (Ottawa 67’s). “In tournaments like this, the quarterfinals can be games you dread. You can find yourself up against a team that has nothing to lose, and we have to give [Switzerland] credit. They took it to us and played a great game, but we found a way to win and that is what good teams do.”

Brian Zanetti (Peterborough Petes) had an assist for Switzerland in the loss as their World Junior tournament draws to a close.

Canada prepares to face Czechia, who advanced following an upset over the United States, in semi-final play on Friday at 4:00pm ET.

Canada completed a perfect preliminary round at the World Juniors as Brennan Othmann (Flint Firebirds) opened the scoring 6:21 into action before Tyson Foerster (Barrie Colts) would strike moments later. Mason McTavish (Hamilton Bulldogs) struck late in the second frame, finishing the contest with a goal and two helpers as Canada improved to 4-0.

McTavish wrapped up the round robin with a tournament-leading 13 points (7-6–13) and a plus-11 rating in four games.

Leevi Merilainen (Kingston Frontenacs) made 31 saves in the Finnish crease as Canada took the shooting column 37-25 and went 2-for-2 on the power play. Canada took 33 penalty minutes to Finland’s four.

Canada secured first place in Group A while Finland trailed close behind with a record of 2-1-0-1 following preliminary play.

Mason McTavish (Hamilton Bulldogs) tacked on two goals to his tournament-leading total, giving him six along with 10 points as Canada defeated Czechia 5-1 to improve to 3-0.

Tyson Foerster (Barrie Colts) scored his first of the World Juniors in the win. Jack Thompson (Soo Greyhounds) picked up a pair of assists while Brennan Othmann (Flint Firebirds) had one.

“One of the things we have talked about is trying to get better every day, which is something we always preach in these short-term tournaments,” said Canada head coach Dave Cameron (Ottawa 67’s). “The last three games, I have seen the team improve and we need to make sure that trend continues. It may only be marginal improvements each game, but we need to continue to put the work in to make sure we are at our best at the end of the tournament.”

Canada returns to action on Monday against Finland. The puck drops at 6:00pm ET.

“[Tying a Canadian record] was a special moment for me, but I have to give credit to my teammates,” said McTavish.”It felt like they were trying to get me the puck all night, especially [Connor] Bedard because he had a really good game. He was the one that told me about the record because he had four goals in December, so I know him and [Brennan Othmann] really wanted me to get that fifth [goal]. It was a great moment for me, but hopefully we can take this momentum into Saturday’s game against the Czechs.”

Canada led 4-0 after one period and didn’t look back as McTavish finished with six points (4-2–6) while Brennan Othmann (Flint Firebirds) had a goal and two assists and fellow New York Rangers prospect Will Cuylle (Windsor Spitfires) had a goal and an assist.

“We showed how deep this team is,” said Othmann. “We have depth throughout the lineup, and it does not matter who is in the game or who is out, everyone is able to contribute in their own way. It does not matter who gets the goals because everyone pitches in, whether that is from scoring, blocking shots or making a nice play. Everyone stood out tonight and we all played a great game.”

Canada outshot Slovakia 44-23, improving to 2-0 in the preliminary round. Their tournament continues on Saturday against Czechia, with the puck dropping at 6:00pm ET.

Mason McTavish (Hamilton Bulldogs) had two assists while Jack Thompson (Soo Greyhounds) and Donovan Sebrango (Kitchener Rangers) both pitched in with helpers as Canada defeated Latvia 5-2 in their tournament opener.

“It has been three months since I have been in a real game, so it was good to get back out there and play in front of Canadian fans,” said head coach Dave Cameron (Ottawa 67’s). “[Latvia] is a good team. They really push the pace and they play smart. We knew it wasn’t going to be an easy game because they have a lot of good players and a lot of skill. There are no easy games in this tournament and you cannot underestimate anyone. We have to give [Latvia] credit.”