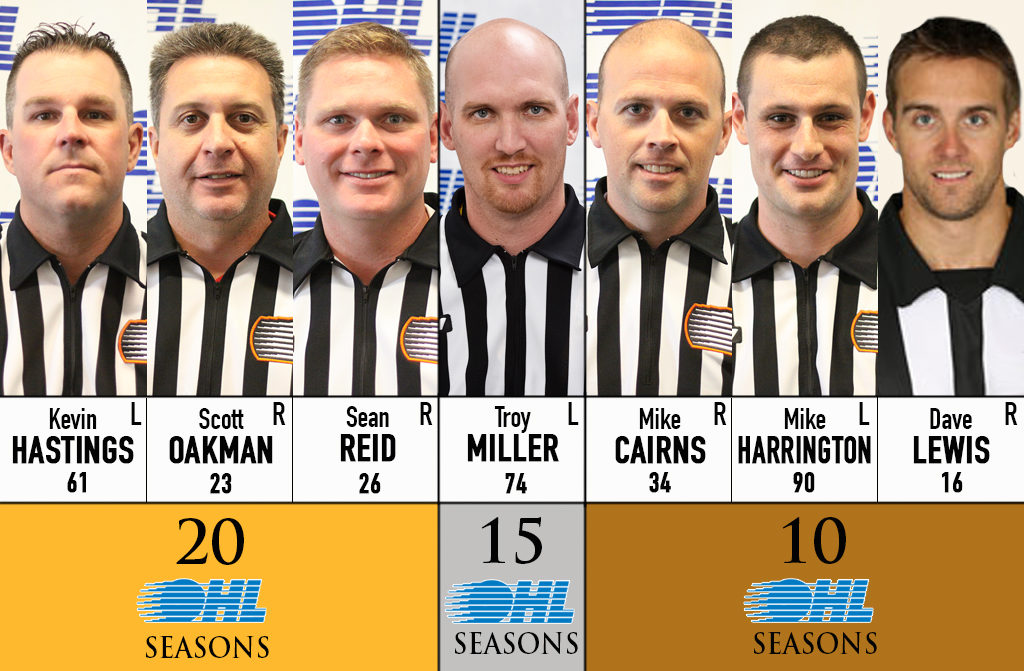 Ontario Hockey League teams aren’t the only ones gearing up for a new season as members of the league’s Officiating Department including over 30 referees recently gathered in Toronto for a two-day seminar in advance of exhibition play.

2018-19 will mark the 20th season for a trio of senior officials including linesman Kevin Hastings, and referees Scott Oakman and Sean Reid.

Hastings is also the most recent recipient of “The Bodie” Character Award for Officials which was formally presented at the OHL Awards Ceremony in June.

“Kevin is most deserving of this award,” said Conrad Hache, OHL Director of Officiating. “Not only was he selected by his peers, but was also a close friend of Bodie (Ken Bodendistel) and this selection makes it even more fitting. After 19 years in the OHL, Kevin continues to bring his dedication, enthusiasm, commitment, and his will to succeed to every assignment he is given which has been recognized by his fellow officials.”

To date, Hastings has skated over 880 regular season games and over 175 playoff games.  He has worked 10 OHL Championship Finals, four Memorial Cups, two league All-Star Games, two Canada Russia Series games, and one CHL Top Prospects Game.  He has also been part of the AHL’s Officiating Staff for 16 seasons and last season was awarded the Michael Condon Memorial Award for outstanding service by an on-ice official.

Established in 2013, “The Bodie” is presented annually to the OHL official who demonstrates a passion and dedication to officiating and the game of hockey, who best exemplifies leadership on and off the ice, professionalism, and is respected by OHL member teams, players, and fellow officials.  The award is named in recognition of former OHL Senior Officiating Manager, Ken Bodendistel, who served 40 years in the league beginning as a Supervisor in 1974-75.  Bodendistel passed away in November, 2013, at the age of 73 after a courageous battle with cancer.

Oakman and Reid are past recipients of the award which has also been presented to Joe Celestin, Mike Cairns, and Steve Corlyon.

Additional officiating team milestones in 2018-19 include the 15th season for linesman Troy Miller, while referee Mike Cairns, linesman Mike Harrington, and referee Dave Lewis, are all set to embark on their 10th career seasons in the OHL.

Preparation continues for 2018-19 with OHL officials hitting the ice for the league’s exhibition season starting Friday August 31, followed by the regular season which commences Wednesday September 19.