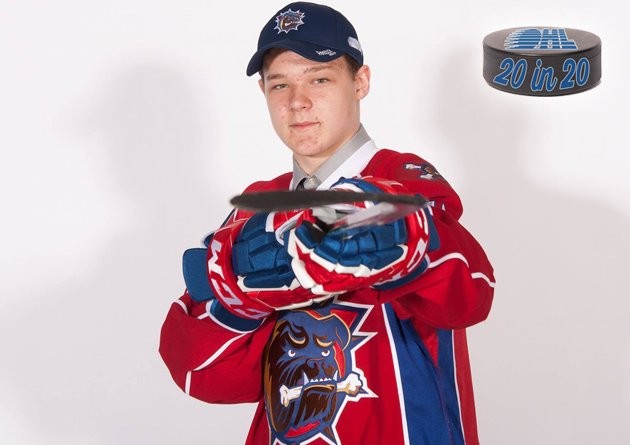 There’s a new era of hockey coming to Hamilton under the banner of a familiar brand. The Bulldogs, who iced American Hockey League teams from 1996-2014, are preparing for their inaugural OHL season in Steeltown.

Coming away from the big ice in Belleville and onto a regulation sized sheet at First Ontario Place in Hamilton, veteran OHL coach and general manager George Burnett’s Bulldogs will be making some changes to their approach this season.

“I think the game itself is changing and there are a lot of different elements evolving on a year-to-year basis,” said Burnett, who enters his 12th season as coach of the franchise and 20th behind the bench in the OHL. “I don’t know that there are big adjustments to be made for us but there certainly are some. We may see more consistency in the way we play now and not have to adjust quite so much from being at home to being on the road. We’ve watched a lot of video from both our own group as well as from the National Hockey League and we’re in the process of putting together our systems.”

While what will change on the ice remains to be seen, off-ice changes have occurred behind the bench as Burnett has brought in former Kitchener Rangers head coach Troy Smith as the club’s new associate coach and assistant general manager. Longtime AHL Bulldogs assistant Ron Wilson will serve as an assistant coach.

On the ice, the Bulldogs feature a trio of core players coming out of the golden horseshoe that will likely be key pieces to their success this season.

In addition to overage centreman Stephen Harper (Burlington) and 19 year-old former first round pick Niki Petti (Welland) whose 18 goals are the most of any returning player, Grimsby native Brandon Saigeon returns to the city where he played his Minor Midget hockey as a member of the Hamilton Jr. Bulldogs. Saigeon, who was selected fourth overall by the Belleville Bulls in the 2014 OHL Priority Selection, had eight goals, 18 assists and 26 points in 62 games. With his draft eligible season upon him, he’ll be utilized in a bigger role.

“We see Brandon as a guy in a frontline situation with a big role,” said Burnett. “He’ll be involved in all situations. He’s had a great summer of strength and conditioning and had the opportunity to attend Hockey Canada’s Under-18 Camp in Calgary which was a great experience for him.”

While Saigeon looks to draw attention from scouts this season, a group of Bulldogs that were included on NHL Central Scouting’s Final Draft Rankings in April and didn’t have the opportunity to hear their names called on draft day will be using that as motivation in the upcoming season. Justin Lemcke, Trent Fox, Matt Luff and Adam Laishram will all be back with something to prove.

“To say that there was disappointment on draft day would be an understatement based off the information that had come not only to players but to staff throughout the season,” said Burnett. “I think we have a motivated group that can collectively help each other to move ahead this year and take some steps to be recognized for their efforts and get some opportunities whether it’s through the draft, tryouts or free agency.”

Entering his fourth year in the league, 19 year-old forward Michael Cramarossa leads all returning Bulldogs in points after he tallied 41 (13-28—41) last season. He’ll be expected to continue producing offensively this season as 2015 draftees Matthew Strome (who is the younger brother of Ryan and Dylan Strome) and MacKenzie Entwistle along with 17 year-old newcomers Mitchell Mendonca and Joseph Mizzi get accustomed to the league.

Justin Lemcke will be a big part of Hamilton’s blueline as the franchise prepares for the likely reality of life after the Subbans following Jordan’s signing of an entry-level NHL contract with the Vancouver Canucks back in May. Since P.K. arrived in Belleville back in 2005, at least one Subban brother has appeared in a game with the franchise in each of the ensuing 10 seasons.

Lemcke heads up a young defensive corps that will see 2014 draft selections Cole Candella and Jack Hanley assigned more responsibility in their sophomore seasons while 18 year-old Jesse Saban will also be given an opportunity to step up. Brody Morris enters the season as the lone 19 year-old vying for minutes on the back end while recent draftees Reilly Webb and Fedor Gordeev have also been added to the depth chart.

Though the Bulldogs blueline comes in relatively unproven, Burnett says the evaluation process early in the season will be quite simple.

“It’s a young group but I know how hard these kids have worked this summer,” he noted. “We chose to use our two picks in the CHL Import Draft on defencemen (Ondrej Kachyna and Christian Mieritz) and both of them have solid credentials. The right thing to do is to provide these guys with an opportunity through the early part of the season and see who takes advantage of the chance to blossom and play bigger minutes. Those that respond will like the outcome and those that don’t will likely see their opportunities limited.”

A developing blueline will be complimented by solid goaltending in Hamilton as overage veteran Charlie Graham returns for a fifth OHL season. A proven battler who saw 10 of his 23 wins come when he faced 40 shots or more last season, Graham is joined by 18 year-old sophomore Connor Hicks in the crease. The Bulldogs also recently received a commitment from Michigan native and 2015 fifth round selection Nick Donofrio.

“I’m not concerned at all with the look of our goaltending,” mentioned Burnett. “It’s nice to be in a situation where you’ve got quality players at that position. Charlie is capable of being amongst the league leaders and I think there’s a strong determination on his part with this being his last kick at junior hockey this season. Connor has put in a good summer of strength and fitness and is highly motivated after a solid rookie season in the league.”

While the new beginnings in Hamilton are exciting for Burnett and the Bulldogs, the longtime OHL architect and strategist is quick to recall fond memories of Belleville.

“For all of the kids that played in Belleville, they’re going to miss it. For those of us who were involved there for 11 years, we have memories that will last a lifetime. Belleville is a great city and we were fortunate as an organization to be involved in their community throughout our time there. What we have now in Hamilton is new and we have a responsibility to a new city, new ownership and to all of our fans to get it right and to make sure we’re ready to go. We want to make our connection with the city and the fans as strong as possible right out of the gate.”

Though they’re a young group, Burnett remains optimistic that the Bulldogs can back up their bark with some bite this season.

“I see a very competitive group that is capable of taking a big step forward. We’re strong in numbers in the ‘97 year and I think that those guys collectively have more to offer this season. I think they, and several others who are out to prove themselves this season will appreciate the opportunity that they have in front of them.”

WATCH AND LISTEN: Bulldogs GM and Head Coach George Burnett shares his outlook on the 2015-16 season.