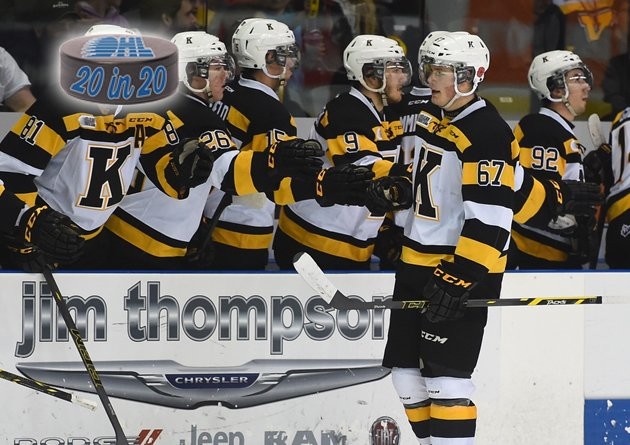 With impact players at each position, the Frontenacs are still striving for success by committee in 2015-16

With Lawson Crouse, Roland McKeown and 2014 OHL Goaltender of the Year Lucas Peressini all eligible to return, there’s little doubt that the Kingston Frontenacs may very well have three of the most impactful players at their position in the Ontario Hockey League.  The question is, can they ice the depth to be contenders in the East Division this season?

Sam Bennett’s days in a Frontenacs uniform appear to be over after his strong playoff run with the Calgary Flames last spring, making way for Crouse to become the torchbearer of the Kingston offence. Fresh off being selected 11th overall by the Florida Panthers in the 2015 NHL Entry Draft, Crouse comes off a 29 goal campaign last season and appears ready to take charge barring an extended stay in The Sunshine State.

“Lawson has learned to play the game the right way throughout his time here,” said Frontenacs second year head coach Paul McFarland, a former hard-working OHL winger and 2003 MasterCard Memorial Cup Champion. “He can pretty much beat you any way he wants. He’s great off the cycle in using his body to get to the net but he’s also got a great release off the rush. He’s your prototypical pro, big power forward and he plays a very complete game for a player his age.”

“We as an organization believe Spencer can have a huge year for us,” continued McFarland. “He’s a very elusive forward that can create plays off the rush but he’s also excellent off the cycle, splitting defenders to create openings for himself. He’s a shoot first player that has come into camp this year in amazing shape and I expect him to take off and be very productive.”

The Frontenacs will be in need of secondary scoring options to complement the high-end talent of Crouse and Watson. Hard-hitting centreman Conor McGlynn returns for an overage season while 19 year-olds Jared Steege and Ryan Verbeek will be relied upon to hit the scoresheet on a more regular basis.

“We’re going to have a lot of competition between anywhere from our third forward to our 12th,” McFarland noted. “We’re going to have guys fighting for roles and it can change on a nightly basis which has the potential to be a great thing. It’s definitely going to be something that is done by committee and we’re expecting our young players like Robbie Burt and Jason Robertson to come in and fight for ice time.”

The Fronts are optimistic that together, the veteran core of defenders can help bring along recently drafted second rounders Jacob Paquette, Jakob Brahaney and 17 year-old Russian Konstantin Chernyuk.

“One of the greatest strengths on our hockey club this year is the veteran leadership we have on the blueline,” said McFarland. “Our young defencemen can take away a lot of good things from the influence of a guy like Roland McKeown who serves in all situations, gets the tough matchups and is out on the ice in those big moments.”

Despite the accomplished credentials of both Crouse and McKeown, Kingston’s foundation may very well be in the crease. Overage netminder Lucas Peressini set franchise records in goals-against average (2.32), save percentage (.922) and shutouts (5) last season, recording a Frontenacs single-season performance that rivals the 2000 CHL Goaltender of the Year display put on by Andrew Raycroft.

McFarland acknowledges that Peressini’s play, that saw the Fronts surrender a franchise-low 197 goals, was instrumental in the 32-28-5-3 finish.

“Lucas was the backbone of our team last year and we wouldn’t have wound up where we did without him. We fully expect him to build off his tremendous showing this season. With that in mind, we feel Jeremy Helvig is ready to take on a bigger role this year as well.  He’s come to camp in great shape and we’re confident that those two guys can push each other.”

Like anyone getting accustomed to a new job, McFarland is happy to have a positive first year under his belt. With a fresh perspective, he and assistant coach John Goodwin, a former two-time 100-point OHL standout, are ready for what lies ahead.

“Our mandate as coaches is that we always want to get better and improve every single day. Not only do we expect that of our players but we strive for that ourselves. We want to build off the things that brought us success last season while, at the same time, evaluating our areas of weakness in order to put in the work to make those things better.”

McFarland will have an opportunity to begin assessing his club’s performance right out of the gate as the Frontenacs begin the season with a three-in-three set during Opening Week.

With back-to-back seasons above .500 behind them, the Frontenacs look to continue trending in the right direction and capitalize on having three of the OHL’s marquee players in Crouse, McKeown and Peressini leading the way for them this season.