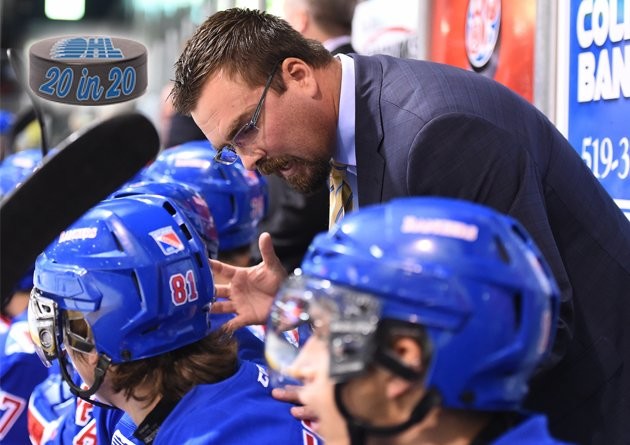 Returning the majority of last season’s squad, the depth throughout the lineup gives the Rangers plenty of options in 2015-16

On the surface there may not be a lot of flash and dazzle to the Kitchener Rangers, however when you look at their options from top to bottom they’re a team that looks capable of grinding out a victory on any given night.

The honest, hard working club gets back down to business with a long list of capable bodies on the depth chart, a reality that will likely force GM Murray Hiebert, assistant GM Mike McKenzie and a coaching staff led by newly named head coach Mike Van Ryn into some tough decisions in the opening half of the season.

The Rangers fell victim to life in the Midwest Division last season, finishing fifth despite a 32-win campaign before being ousted in six games by the London Knights in the first round of the playoffs.

With everyone a year older, the Rangers come into the 2015-16 season with some of the greatest depth of any team in the league and are backed by an intriguing goaltender in St. Louis Blues fifth round pick Luke Opilka who committed to the club in July. For the Rangers, who have gone south of the border in the past to recruit names such as John Murray, Josh Unice, Brandon Maxwell and John Gibson, the opportunity to have Opilka on board is big.

“We’re thrilled that Luke has decided to join our program,” said general manager Murray Hiebert. “This is the first time in a couple years that we’re going into the season with a fair bit of optimism and stability in the crease and that makes a huge difference for everyone. We’re also confident in the abilities of 19 year-old Dawson Carty who came over from the Mississauga Steelheads at the start of last season. We’ve seen veteran goaltenders find their niche in our league many times, and a guy like Dawson has that potential.”

With confidence in their goaltending situation, the Rangers set out to see what their blueline will look like this season. The addition of overager Brian Brosnan from the Niagara IceDogs gives Kitchener eight bodies on the back end vying for six regular spots.

“We think we have a good number of capable bodies on defence that can make a difference,” Hiebert continued. “St. Louis Blues prospect Dmitrii Sergeev had a really strong showing for the Russian National Junior Team in Calgary this summer when they played against Canada. He had 28 points last season (5-23–28) and has had a great summer. We’re looking forward to seeing what he can do. We’ve also got Frank Hora coming back along with fellow 19 year-old Dylan DiPerna. We hope to see Doug Blaisdell have a bounce back season for us and we’re really looking forward to seeing what’s in store for a couple of 17 year-olds that we’ve drafted in Sean Allen and Connor Hall.”

2015 second round selection Elijah Roberts rounds out the Kitchener blueline that will move on without graduated rearguards Liam Maaskant and Max Iafrate.

The Rangers offense looks to take a step forward after three consecutive seasons below the 220 goal mark. Van Ryn, a former offensively capable defenceman who played seven NHL seasons, will try and jumpstart the offense that will likely be propelled by committee.

Leading scorer Ryan MacInnis returns to the lineup after putting up 62 points (25-37–62) in 67 games last season. The son of Rangers legend and Hockey Hall of Famer Al MacInnis, Ryan is a second round pick of the Arizona Coyotes and is one of several options the Rangers can turn to for offensive production.

“Ryan will be looked at as a leader on our club this season,” said Hiebert. “We’re also expecting big things from Darby Llewellyn, Nick Magyar, and overage forward Brandon Robinson who will join us later this season after he recovers from offseason hip surgery.”

The Rangers can also expect 2014-15 acquisition David Miller and Swedish forward Gustaf Franzen to pitch in while former first round pick Mike Davies and speedy undersized winger Mason Kohn may have the chance to earn additional minutes up front.

While the Kitchener attack didn’t lose any players to graduation, it gained a few newcomers. 18 year-old winger Jake Henderson joins the Rangers after spending last season with the USHL’s Omaha Lancers and has gained the reputation of being a tough customer.

“Jake is a very physical player,” noted Hiebert of his new addition on the wing. “After trading away Brent Pedersen last season, we felt we lost a little bit of size and strength up front. We feel like Jake can provide us with that presence in our lineup.”

“Competition for jobs is going to be huge,” said Hiebert, who has also received commitments from 2015 picks Joseph Garreffa, Nick McHugh and first rounder Greg Meireles who will play in Ottawa this season. “It’s a year of optimism certainly in terms of our forward group. It’s not superstar laden but I think we have depth all the way through and all of our lines should be capable of posing a threat to the opposition.”

It’s shaping up to be another tight race in the Western Conference this season with the Rangers in the mix as they chase their second consecutive winning season and fifth in seven years following a franchise-best 53 victories in 2008 earned them their last Midwest Division title and OHL Championship.

“I would hate to be a reporter trying to predict one through ten on this side,” said Hiebert with a chuckle. “It’s going to be tough.”

The Rangers open their season at home on September 25th against the Owen Sound Attack.

WATCH AND LISTEN: GM Murray Hiebert talks about the players that will help the Rangers battle a competitive Midwest Division.