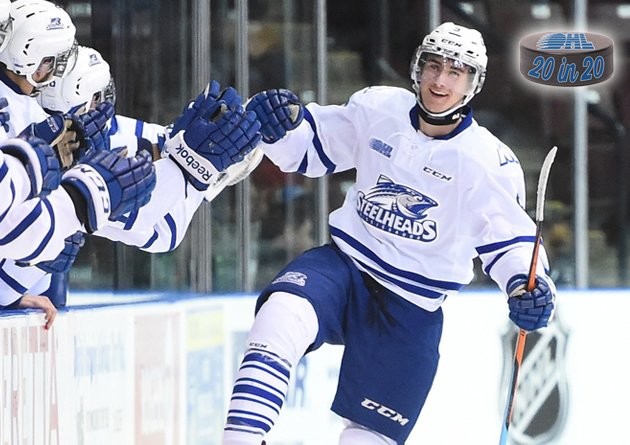 A summer surge of key commitments provides the Mississauga Steelheads a current of momentum heading into an optimistic 2015-16 season where the club hopes to make a splash in the Central Division.

The influx of fresh faces in the dressing room along with a collection of returning offensive-minded veterans should mesh well for the re-branded Steelheads, who missed out on the playoffs last spring after two consecutive first round exits.

“It’s obvious that the skill level of our team is going to be higher this season,” said Steelheads head coach and general manager James Boyd. “We have guys with a proven pedigree on our club who have scored at a lower level and many who have produced at the OHL level. There’s some familiarity between returning forwards like Josh Burnside, Bryson Cianfrone and Nathan Bastian which always helps. This is part of the plan that we’ve been building towards for the past couple of seasons.”

While Cianfrone and Burnside give the Steelheads the veteran presence they need up front, it’s several offensively gifted young forwards that have fans and scouts alike looking forward to the upcoming season.

Draft eligible sophomore Michael McLeod comes off a 29-point rookie campaign followed up by a gold medal at the Ivan Hlinka Memorial Tournament as a member of Canada’s Under-18 squad this past summer. What’s more, the Steelheads recently acquired fellow former OHL Cup MVP and 2015 OHL Priority Selection third overall pick Ryan McLeod from the Flint Firebirds – setting the stage for the two talented brothers to play alongside each other in blue and white.

Boyd saw the elder McLeod make gradual improvements throughout his rookie season in the OHL.

“Last year Michael found his way around the league as a young guy, playing against some of the top players on a nightly basis. He really concentrated on improving his game and in the second half I thought we saw a different player than we saw in the first. He was a real leader on our team and he started to show some of the offensive flair that we saw in his minor midget year.”

The trout will also benefit from the addition of 2015 fourth overall pick Owen Tippett who scored 52 goals and added 35 assists for 87 points in 50 games with the Toronto Red Wings Minor Midgets last season. He joins the ranks up front with recently committed forwards Luke Kutkevicius, a second round pick in 2014 who spent last season with the North York Rangers Jr. A team, and Brendan Harrogate, a seventh round pick in 2014 that was a standout for the Sutherland Cup Finalist LaSalle Vipers Jr. B team last season.

Not to be overlooked, the Steelheads received a commitment from second round CHL Import Draft selection Daniel Muzito-Bagenda, a 19 year-old who spent last season with MODO of the Swedish Junior League. The 6’1”, 200Ib. winger compiled 10 goals, 25 assists and 35 points in 37 games.

The intriguing additions don’t stop up front though. The Steelheads came to terms with 2014 second round selection Nicolas Hague, a 6’6” defenceman who was a key contributor in the playoffs with the Kitchener Dutchmen Jr. B team last spring, registering three goals, nine assists and 12 points in 10 contests.

Hague joins a blueline headlined by draft eligible 17 year-old Sean Day who enters his third OHL season. While the offensive skills are evidenced by 10 goals and 26 assists last season, Day has made big strides on the defensive side of the puck.

“Sean came into the league and it was a difficult transition I think because he had to learn some things defensively at a very young age,” said Boyd, who has coached Day since he came to the league as a 15 year-old. “He’s shown a willingness to do that and his defensive play has improved tremendously. Last year he started to show some of his offensive capabilities and really was a key player as a 16 year-old on our club which is rare.”

Though the offseason has featured numerous positive additions, one notable departure includes the likely graduation of veteran goaltender Spencer Martin who has spent the past four seasons with the club.

Martin, who missed the entire second half of last season due to a knee injury, is eyeing a big opportunity with the Colorado Avalanche who selected him in the third round of the 2013 NHL Entry Draft.

“There’s every indication that Spencer is going to play professionally this year in Colorado’s system and good for him, he deserves it. He has carried a lot of the load for our team over the last few years,” Boyd said. “We have Cameron Zanussi and Leif Hertz, who were with our team last year, being given every opportunity to start the year out of training camp. Both guys were drafted by our organization and we’re very familiar with both. Their confidence has to be high knowing that there’s an opportunity ahead and we’ll see how they perform.”

Boyd and newly hired assistant coach James Richmond will certainly have some early season questions in goal, but with the influx of young talent on the roster one can only hope that the fish will be able to raise the bar offensively at the other end of the ice after back-to-back seasons below the 180 goal mark.

“We know the Central Division will be very competitive. There’s excellent coaching all around and goals are at a premium on most nights,” Boyd concluded. “I’m looking forward to seeing what this group can do.”

WATCH AND LISTEN: Steelheads GM James Boyd shares his outlook on 2015-16 and some Players to Watch.