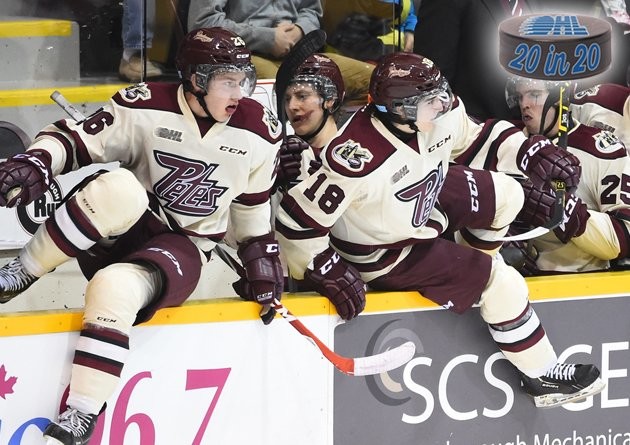 A changing of the guard in Peterborough entering the 2015-16 season sees several veterans moving on while a crop of emerging young players looks to fill the void in the maroon and white.

With a commitment to build through the OHL Priority Selection over the past several seasons, the Petes have drafted and developed names such as Eric Cornel, Matthew Spencer, Cameron Lizotte, Jonathan Ang and Dylan Wells, all of whom have come together to help form the core of the 2015-16 squad that will battle in a wide open East Division.

While well-traveled vets Michael Clarke, Josh MacDonald, Nathan Pancel and Steven Varga won’t be back, the Petes are hopeful that a returning class led by Tampa Bay Lightning prospects Matthew Spencer and Dominik Masin along with established rearguards Kyle Jenkins and Cameron Lizotte can lay the groundwork for a consistent club.

With an experienced top four on the blueline, the Petes will see smooth skating sophomore Matthew Timms and 2015 second and third round picks Nick Grima and Cole Fraser jostle for the remaining minutes on the back end under the watch of recently hired assistant coach Jake Grimes.

Once a Peterborough point producer himself, Petes fifth year head coach Jody Hull faces some lingering questions up front to start the season as opportunities abound for newcomers to step into meaningful roles.

Garlent will likely serve as Peterborough’s top centreman after 19 goals, 21 assists and 40 points in 52 contests last season. Betzold, who enters his fourth season with the Petes, leads all returning players with 24 goals last season, nine of which came on the man advantage to lead the team. Lorentz scored 16 goals in his sophomore campaign last season while Cornel tries to return to his 2013-14 form when he scored 25 goals, prompting the Buffalo Sabres to take him in the second round of the 2014 NHL Draft.

Beyond that foursome however, the number of experienced producers the Petes bring to the table is limited.

“We think the young players that we’ve drafted this past season plus guys we’ve drafted in 2014 are going to have an opportunity to make an impression early on,” Petes general manager Mike Oke noted.

Among those youngsters is sophomore centreman Jonathan Ang who was Peterborough’s first round, ninth overall pick in the 2014 OHL Priority Selection. Ang had 10 goals, 10 assists and 20 points last season, the most by any Petes 16 year-old rookie since Nick Ritchie in 2011-12.

With a knack for coming up with highlight reel goals, Ang has Petes brass looking forward to what’s in store for the upcoming season.

“We think Jonathan really adapted nicely as a rookie last season,” Oke said. “From Christmas on we noticed a big difference in his game and he scored a number of big-time goals. We’re expecting that he’ll continue the trend upward and he’ll be somebody that we can count on as the season progresses.”

Ang, who collected 17 of his 20 points following the Christmas break last season, is joined by fellow 2014 draftee Adam Timleck in looking to gain added responsibilities.

Hoping to follow up Ang’s solid rookie performance, 2015 first round selection Zach Gallant gives the Petes a steady two-way presence down the middle. Drafted fifth overall from the Mississauga Rebels, Gallant had 24 goals, 34 assists and 58 points in 62 games while also winning a gold medal with the Ontario Under-16 team at the Canada Winter Games in February.

Gallant is joined in the lineup by second round pick C.J. Clarke who scored 31 goals and added 33 assists for 64 points on the wing last year with the OHL Cup Champion Toronto Marlboros. A pair of fifth round picks in Eddie Schulz (2014) and Nick Isaacson (2015) have also committed to the Petes out of training camp.

“There are going to be opportunities here for determined young players who are willing to put in the work and earn more responsibility,” Oke continued. “Opportunity knocks for a lot of the young guys on our roster.”

As the Petes get established offensively early in the season, they can rest assured that a group of quality goaltenders stands as the last line of defence in the Electric City.

After standing on his head and making numerous timely saves in Peterborough’s first round clash with the MasterCard Memorial Cup Champion Oshawa Generals last spring, 19 year-old goaltender Matthew Mancina returns. He’s accompanied by 17 year-old sophomore Dylan Wells who comes off a productive summer having won a gold medal with Canada’s Under-18 team at the Ivan Hlinka Memorial Tournament. Wells was also recognized as one of the top draft eligible North American goaltenders for the 2016 NHL Draft on the NHL Central Scouting Futures List released in July.

For GM Mike Oke, having two solid goaltenders is a good problem to have.

“I think the fact that we’ve got two goaltenders who have demonstrated they’re both quality performers will encourage them to be at the top of their game so that when they’re given opportunities they’ll be pushing one another. Scott Smith is another good goaltender in our system who saw action with us last season. Internal competition is a good thing as we work together to achieve success.”

The storied Petes have had plenty to celebrate since 1956 and hope to provide their fans with even more reason to cheer throughout their 60th anniversary season which starts at home against the Ottawa 67’s on Thursday September 24th. They’ll see Eastern Conference opponents in each of their first five contests before a Western Conference road swing to Windsor, Saginaw and Flint.

WATCH AND LISTEN: Petes’ GM Mike Oke shares his outlook on the 2015-16 season and some Players to Watch.