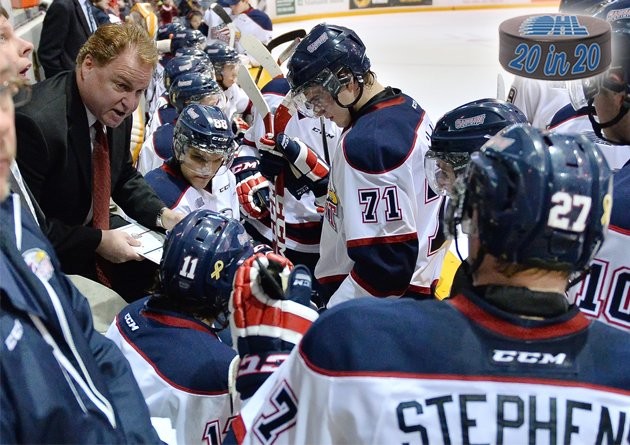 With a large returning core, the Spirit bring heightened expectations into the 2015-16 season

After making the playoffs with a very young team last spring, the Saginaw Spirit return nearly their entire 2014-15 roster for another run in what’s shaping up to be a competitive West Division.

With a year of experience as a group, the Spirit lose just three regulars from last season in rearguard Jacob Ringuette and forwards Vladislav Kodola and Adam McPhail.

Familiarity will clearly work in favour of the Spirit out of the gate this season, meaning expectations are a little bit higher this time around.

“We went through the process of being young last year and took our lumps but that’s what you have to do in this league,” said head coach Greg Gilbert, a longtime NHLer who coached the Calgary Flames from 2000-2003. “Our expectations this year are obviously going to be higher. We have a group of players that understand what the league is about now, they understand how we play so it’s going to be a little easier to come together this year. I’m hoping that we get off to a good start and a lot of that is going to depend on how we pull together in the weeks leading into the season.”

The Spirit feature some of the top forwards in the OHL, with San Jose Sharks prospect Dylan Sadowy, whose 42 goals last season were among the league leaders, serving as a catalyst on the attack. With a quick release and an ability to finish, the Spirit continue to expect big things from the 19 year-old.

“Dylan has been given every opportunity and continues to improve as a player,” Gilbert commented. “He needs to continue sticking to his game. He’s got all the tools, all of the ability and all of the grit, now he just needs to focus on bringing that to the rink every night. I could see him pushing numbers, and I’m not going to put numbers on him, but he’s a finisher and he’s going to have opportunities this season.”

Established forwards in Sadowy, Stephens and jumpstart sophomores Tye Felhaber and Artem Artemov will continue to lead the Saginaw offence, but the Spirit also boast an intriguing newcomer in first round selection Brady Gilmour, who was selected sixth overall from the Quinte Red Devils. Gilmour helped his club capture an OMHA gold medal last season and was named OMHA East Player of the Year with 28 goals, 33 assists and 61 points in 36 contests.

“Brady’s game transitions well to the OHL,” said newly named Spirit general manager Dave Drinkill, who formerly served as assistant GM of the Barrie Colts. “He’s a competitive kid but his intelligence is off the charts and he already thinks like an OHL player. He is a 200-foot guy who can really dictate the play and be an offensive catalyst. You put him with young guys like Felhaber and 2015 draft pick Cole Coskey out of Chicago and we could have a good core of forwards for the years to come.”

Gilmour and Coskey are accompanied by recent second round pick Kirill Maksimov in vying for roles up front with a deep Spirit group. The talented trio will no doubt push returning veterans for ice time as the season progresses.

The Saginaw blueline looks to be crowded as well. Veterans Will Petschenig and Greg DiTomaso are the elder statesman of a young group of rearguards that include big 6’6”, 235Ib. sophomore Keaton Middleton, the offensively capable Marcus Crawford, physical competitor Chase Stewart and fellow 18 year-olds Michael Holmes and Troy Henley. Also joining the back end is 17 year-old first round CHL Import Draft selection Markus Niemelainen and 2015 second round pick Robert Proner.

While Petschenig and DiTomaso will see plenty of ice, head coach Greg Gilbert sees big things ahead for Middleton, who is the younger brother of Ottawa 67’s defenceman Jacob Middleton.

“Keaton certainly has the size and his skating and mobility are pretty good for a guy of his stature. He plays hard and he’s at his best when he plays with an edge to his game. He has the ability to be a number one defenceman down the road and he wants to learn, he listens and he tries the things that you’re teaching him. He’s going to be a heck of a player if he continues to progress the way he has been.”

A maturing defence corps will line up in front of one of the OHL’s emerging young goaltenders in Evan Cormier, who was acquired from the North Bay Battalion midway through last season. Cormier, who won a bronze medal representing Canada at the World Under-18 Hockey Championships in Switzerland in April, has the confidence of Spirit management.

“I really liked Evan’s game going back to seeing him as a Minor Midget in Clarington,” said Drinkill. “He didn’t have a lot of opportunity in North Bay with Jake Smith in the crease, but I think he came into his own when he arrived in Saginaw and took on a pretty good workload. He wants to be a pro and head coach Greg Gilbert has a very high opinion of him. We feel Evan has the ability to be one of the best goaltenders in the league.”

Cormier will carry the load in goal for the Spirit with the help of 18 year-old David Ovsjannikov and 2015 third round selection Brendan Bonello.

Expectations around the Dow Event Center are undoubtedly higher coming into the 2015-16 season, but Greg Gilbert knows it’s very early and wants his club to respect the process that has to come together before any positive results.

“We have to set our goals in place,” he said. “We don’t want to get ahead of ourselves and we don’t want to look behind. We know that we’re building in the right direction, but we’re still going to have our bumps in the road like all junior teams. With the group we’re bringing along now we’re looking to make improvements this year and be a very competitive hockey club, no question about it. We want to battle for home ice in the playoffs but we’re not going to shoot for the stars – we’re going to take it day-to-day, develop the right way and when young men do that as a group good things happen. That’s what we’re striving for.”

The Spirit rekindle an old Michigan hockey rivalry to open the season when they face the Flint Firebirds in a home-and-home set. The Saginaw Gears and Flint Generals battled it out in the IHL dating back to the mid-1970’s. With OHL hockey coming to Flint this season, the I-75 feud is about to be renewed in mid-Michigan.