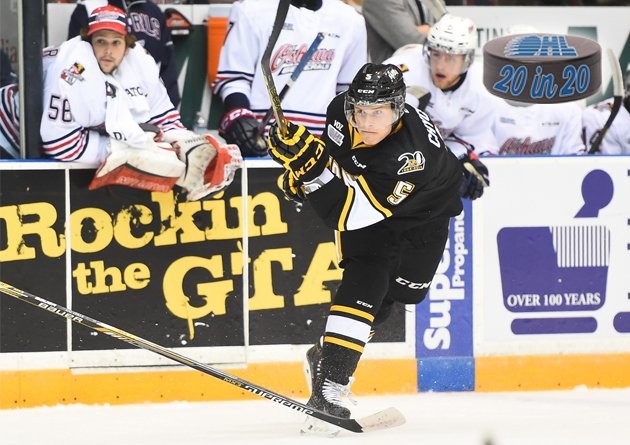 Despite a talented group of youngsters, veteran contributions will be key for the Sting in 2015-16

The Sarnia Sting bring an older, more experienced group to the rink in 2015-16 after improving their record by 12 wins a year ago following a last place finish in 2013-14.

Now comes the next step of the rebuild, one that includes a new ownership group under OHL graduates and longtime NHL fixtures Derian Hatcher and Buffalo Sabres forward David Legwand.

With Hatcher stepping into his first season as head coach, the Sting feature a large returning class headlined by 2014 first overall OHL Priority Selection pick Jakob Chychrun who has already earned the respect of Sting brass, being named an alternate captain as a 16 year-old rookie.

Chychrun, who missed time due to injury last season and was unable to participate in Hockey Canada’s National Teams’ Summer Showcase due to a lingering shoulder ailment is on the road to recovery, something Sting GM Nick Sinclair says will be an important factor for the club this season. The 6’2”, 214Ib. defenceman had 16 goals, 17 assists and 33 points in his 42 games last season and is entering his draft year.

“We need a healthy number five back there for us,” said Sinclair. “He’s a huge presence in our dressing room, he’s a leader. The way he goes about his day-to-day life is professional from top to bottom. His work ethic is exceptional and he does so much off the ice for us as well. Not having him on the ice impacts the outcome of games at times and we miss him in the dressing room during those times as well. We’re optimistic he’ll be ready to go to start the season.”

Chychrun is one of many capable defenders on the Sting blueline to start the 2015-16 season. A good problem to have, Sarnia has an abundance of bodies back there.

“We had nine OHL defencemen attend our camp this year and there are going to be some heated battles for roles on the back end,” Sinclair continued. “We feel that the depth on our blueline is a real strong point of our team.  The addition of Josh Jacobs is key. He’s a New Jersey prospect that is going play a lot of important minutes for us. A guy like Connor Schlichting, who missed almost the entire 2014-15 season due to injury can also be a factor. He attended Chicago’s Development Camp and I’ve heard nothing but good reports.”

Nineteen year-olds Kevin Spinozzi, Jeff King and Zach Core will also be expected to be dependable options while a group that includes Alex Black, Josh Defarias, Jake O’Donnell and 2015 GOJHL Western Jr. B Rookie of the Year Franco Sproviero will compete for minutes as well.

With the exception of one major question in the forward ranks, the Sting appear to be fairly set offensively and could be a tough team to play against if their big shooters get hot.

The unknown destination of New Jersey Devils first round pick Pavel Zacha, who was the first overall selection in the 2014 CHL Import Draft, has folks in Sarnia waiting with bated breath. The centreman had 16 goals, 18 assists and 34 points in 37 games as a rookie and also represented the Czech Republic in the 2015 World Junior Hockey Championships.

“New Jersey will determine where Pavel ends up,” noted Sinclair of his star centreman. “He’s a huge part of our team, a real horse up front and there will be some big shoes to fill if he isn’t playing for us at any point this season. Time will figure that out and once he goes to camp they’ll see where he falls into place. We’re hopeful that another year in the Ontario Hockey League playing big minutes in all situations will serve him well in the long term with his development.”

With or without Zacha, the Sting have some other offensive options that came along nicely last season. Toronto Maple Leafs prospect Nikita Korostelev led the team in scoring with 24 goals, 29 assists and 53 points in 55 games while sophomore winger Jordan Kyrou, who won a gold medal with Canada’s Under-18 Team at the Ivan Hlinka Memorial Tournament this summer had 36 points (13-23—36) as a rookie.

While there’s every reason to believe that Sarnia’s young forwards in Kyrou, Anthony Salinitri and 2015 first round pick Sasha Chmelevski can contribute, the Sting will be relying heavily on the play of their more experienced bodies up front – ones that showed signs of promise last season.

“Going into the year I think people tend to look at the jumps that some of the younger players might make,” Sinclair commented. “Just as importantly for us though, we expect our older guys to take a big step. We have a heavy crop of 19 year-olds and we need them to continue making progress this year. We saw some great things from Hayden Hodgson who scored 23 goals, 14 more than the year prior while Alexander Renaud increased his total from two in 2013-14 to 13 last year. Brandon Lindberg scored 13 as well. We need those guys, along with other vets in Daniel Nikandrov and Patrick White to be productive for us.”

Like a few other teams around the league, the Sting enter the season with a new face poised to be their primary option in goal. Eighteen year-old Justin Fazio, who was used frequently by the Sting through the end of October last season, will be given every opportunity to run with the starting job.

“We put Justin in some big situations as a 17 year-old last year and we saw some really good things,” said Sinclair. “Consistency is an area that he’s been working hard on over the summer, putting the time in and showing a lot of commitment. We’ll continue to evaluate that position going forward with each week.”

The Sting used one of their two second round picks in April to select 6’3”, 242Ib. goaltender Aidan Hughes from the London Jr. Knights. Hughes is joined by 17 year-old Lambton County native Kaden Fulcher in filling out the goaltending depth chart for Sarnia to enter the season.

To have more success, the Sting will have to improve their play on special teams after running the league’s 16th ranked powerplay (16.5%) and 17th ranked penalty kill (76.7%) last season. Sarnia will set out to do that this season with an older, more experienced team on the ice.

Should the question marks surrounding the future of Pavel Zacha, the health of Jakob Chychrun, and early season goaltending work in Sarnia’s favour, the Sting’s steady defence corps and balanced attack could make them a team to keep an eye on in the Western Conference this season

WATCH AND LISTEN: Sting GM Nick Sinclair breaks down the upcoming season and 2015-16 Players to Watch.