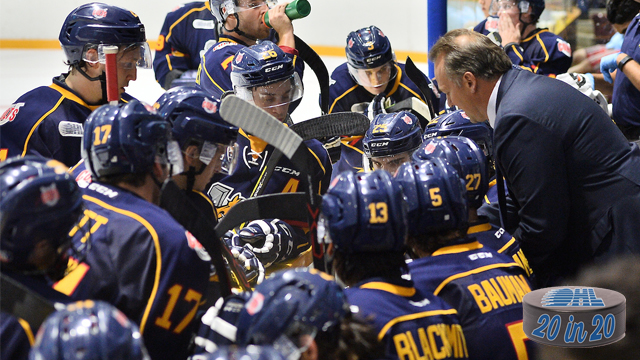 After claiming three Central Division titles in the past four seasons, the Barrie Colts will feature a younger look in 2016-17 as a group of new Colts learns to trot before they can run.

Few Eastern Conference teams have been as consistent as the Barrie Colts over the past five seasons.

Dale Hawerchuk’s Colts have made it past the first round of the OHL Playoffs five years running, most recently falling to the Niagara IceDogs in the Eastern Conference Finals last spring.

With veterans in reigning OHL scoring champ Kevin Labanc, Andrew Mangiapane, Justin Scott, Rasmus Andersson and goaltender Mackenzie Blackwood moving on, the Colts will begin forming their next stable of core contributors for the future.

“You’re always going to deal with turnover in junior hockey,” said Colts general manager Jason Ford. “We had a pretty good group of ’96 players that we went with for the last few seasons and it paid off well. We had some very good seasons but fell short of our ultimate goal. I think fans here in Barrie will remember it as a great run nonetheless.”

With so many key players leaving the fold, the Colts will need their overage veteran forwards to play large roles and provide stability for a young group up front. The club recently released overage options in defencemen Greg DiTomaso and Josh Carrick.

“We’ve got a situation right now where there are four overagers on the roster,” said Ford. “Roy Radke will be attending Chicago Blackhawks camp, but the overage situation is something that will be settled in the coming weeks as we head into the season.”

Of the four veterans that also includes Cordell James, Anthony Stefano and Keigan Goetz, Ford cited James as one who will play a leadership role with the young club. James had 19 goals, 25 assists and 44 points in 66 games last season.

“Cordell has always been a real honest two-way player. He thinks defence first a lot of time but last year he took a step forward production-wise. He’s entering his fourth year now and he’s always been big enough, strong enough and skated well enough to make an impact in this league. He’ll be going to Traverse City with the Dallas Stars and we’re hoping that can kick start what will be a great year for him.”

The Colts recently added Russian winger Kirill Nizhnikov in a deal with the Mississauga Steelheads last week. The seventh overall pick in the 2016 OHL Priority Selection joins defenceman Tyler Tucker as one of two first round picks on the roster.

“Kirill is a dynamic player, one we really liked in our viewings of him last season,” Ford said of the move. “We’re going with a younger group and if we could get (Jack) McBain into the picture here we’d have three first rounders in our lineup, which isn’t something we’ve had out of the gate before.”

“We’ll be keeping the dialogue open with Jack and his family,” said Ford. “We certainly remain hopeful that we can come to an agreement somewhere down the road.”

The Colts are hopeful that sophomore Giordano Finoro, who elevated his game during Barrie’s second round series with North Bay last spring, can emerge as a reliable centreman while youngsters in 2015 third round picks Aidan Brown and Jason Willms, former Toronto Marlboros winger Jaden Peca and sneaky scoring threat Kyle Heitzner can be long-term fixtures offensively.

The Colts are particularly excited about 17-year-old draft eligible Swedish import Tom Hedberg, the club’s second round (104th) overall pick in the CHL Import Draft this past summer.

“Tom is very poised and makes sound puck decisions,” said Ford. “In his head he realizes the importance of moving pucks up and getting them out of his zone and does this exceptionally well for his age. His skating enables him to do some pretty special things. He’s already fitting in with his teammates and his English is very good.”

Goaltenders David Ovsjannikov, Ruan Badenhorst and Christian Propp will jostle for time in the crease behind the young roster, with the returning Ovsjannikov as the likely candidate to see time out of the gate.

“With three guys in the system, each at different ages, we’re trying to get a look and see how everybody fits in,” said Ford. “David came in and played well last year and he returns to a bit of a different dynamic. We’ll be leaning on him for some minutes from the get-go.”

Ford was straightforward in his outlook for the season, but was optimistic that the Colts could exceed the expectations of some in the wide open Eastern Conference.

“We’re going to have to be patient with it,” he said. “Along the way there’s going to be bumps in the road and growing pains that every young team has to work through, but we have some good young players here.”

“If we get some good goaltending and have a few players establish themselves over the first few months of the season, there’s no reason why we can’t make some noise in the East.”

The Colts begin their season on the road, with trips to Kingston and Ottawa on opening weekend.