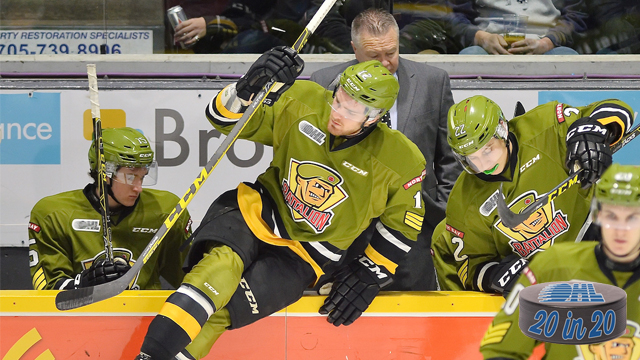 Prominent Troops have graduated, but The Battalion soldiers on, hoping the next company of standouts in green will step forward this season.

The North Bay Battalion are maneuvering into new territory this season, soldiering on without long-time veterans in Mike Amadio, Jake Smith, Mathew Santos and Kyle Wood as head coach Stan Butler enters his 19th season with the club, looking to promote those eager to climb in rank.

With a vigorous commitment to team defence, the Battalion have managed to remain competitive even with fluctuating levels of offensive talent on the roster over the past 10 years. With two key forwards and a top pairing defenceman out of the picture however, it certainly merits asking where goals will come from in 2016-17.

Seventh round steal @brettmckenzie12 has the size and skillset to deliver.

“I don’t think you really replace guys like that,” said Battalion head coach and general manager Stan Butler, the winningest active coach in the OHL today. “That’s the neat thing about junior hockey though. Every year different players evolve and elevate different areas of their game. We’re counting on a few guys to do that here.”

Veteran centreman Brett McKenzie and 6-foot-7 defenceman Riley Bruce are the last players remaining from the club’s inaugural season in North Bay in 2013-14, and the Battalion will need both to be reliable performers at their respective positions.

McKenzie comes off a 26-goal season as an 18-year-old, one that put him on the radar of the Vancouver Canucks who selected him in the seventh round of the NHL Draft this past summer.

“It’s a great confidence booster for Brett to be taken by Vancouver,” said Butler of the former first round pick in the 2013 OHL Priority Selection. “He’s a very complete player that plays a 200-foot game. He’s a guy who does everything pretty well and he’d get a check mark in every box in terms of his on-ice abilities.”

The Battalion will be counting on McKenzie to build off his strong 2015-16 season, but contributions from other names in Zach Poirier, Brett Hargrave, Steve Harland and Daniil Vertiy will be sorely needed if the Troops hope to field a consistent attack.

With minutes opening up in the forward ranks, the upcoming season presents a great opportunity for young talent in Adam McMaster, Rhys Forhan, Jacob Ball and Brad Chenier along with 18-year-olds Max Kislinger, Justin Brazeau, Kyle Potts and David Sherman to develop their game.

While goals could be hard to come by early on, North Bay boasts an experienced group of defencemen who will be able to supplement the club’s offence and give the Troops a chance to win on most nights.

“Cam is a great offensive defenceman, but I think he wants to work on his defensive side a little bit this season,” said Butler. “No doubt about it though, the game is going in a direction where more and more offence is generated from the back end, and he’s involved in that.”

Butler is confident that other members of the Battalion blue line can come alongside Dineen to help distribute the workload on the power play.

“We have a few defencemen with an offensive dimension to their game,” he continued. “A guy like Swedish rookie Adam Thilander will have something to show in that regard. Brady Lyle, who was a late cut from Team Canada’s Under-18 team and Mark Shoemaker, who was a draft pick of the San Jose Sharks, can also move the puck and create opportunities.”

Bruce and fellow 19-year-old Zach Shankar will see shutdown minutes while Jake Ramalho and newcomer Eric Allair round out the back end.

Needing to address their goaltending situation following the graduation of Jake Smith, whose name can be commonly found atop the franchise’s goaltending records, the Battalion brought in overager Brent Moran from the Flint Firebirds.

Moran, a former fourth round pick of the Dallas Stars in 2014 who went unsigned, comes off a tough season split between Niagara and Flint, but Butler is confident in his abilities.

“Brent came into the league as a highly touted second round pick and did some great things in his first three seasons, but things didn’t progress for him last year. I’ve always believed that of the three positions goaltenders take the longest to develop, so we’re certainly excited to have Brent in North Bay. We’ve seen a lot of him and know he’s capable of big things.”

After finishing second in the Central Division last season before advancing beyond the first round of the playoffs for a third straight year, the Troops will have their work cut out for them in the months ahead.

“I think Mississauga is looking like the team to beat in our division,” said Butler of the landscape. “I was quite impressed by Sudbury in our recent encounters with them. We, along with Barrie and Niagara have all lost some key guys, so it’ll be interesting to see how things go.”

Though they lack the heavy artillery of recent campaigns, the Battalion move forward, seeking success as a unit in 2016-17.

2019-20 Recaps
Wednesday Highlights: Overtime winners all around
21 mins ago