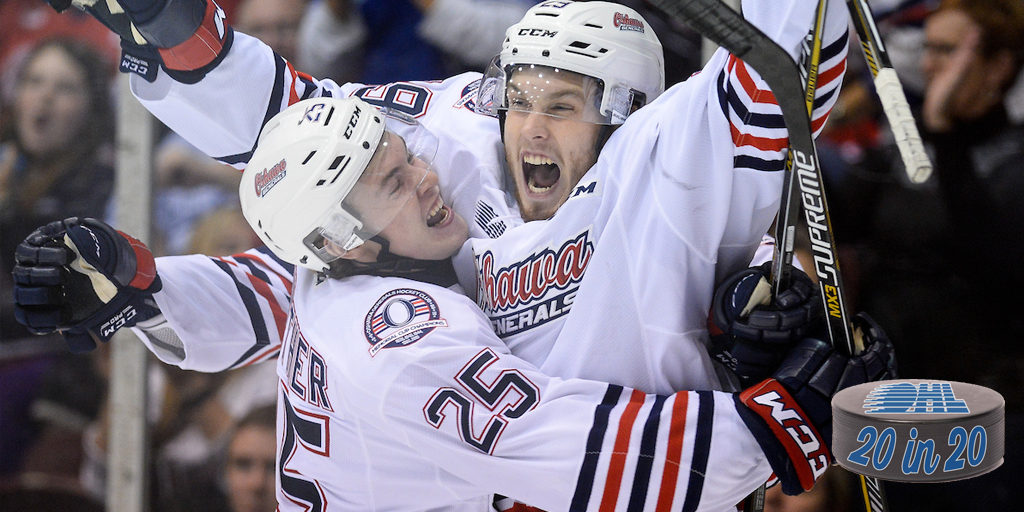 With size and experience up front and a goaltender capable of stealing a game, the Oshawa Generals are in good shape headed into 2016-17.

Just a season removed from a fifth MasterCard Memorial Cup title, the Oshawa Generals celebrate 80 years this season and look like a club determined to continue their recent run of success.

While most teams come away from a championship run depleted and looking to re-load, the Generals accomplished their goal of reaching the playoffs last season and enter 2016-17 with a surprising amount of depth throughout the roster.

“We feel our depth is a strength here,” agreed Generals vice-president and general manager Roger Hunt, a former long-time assistant coach with the club. “Our guys last year did a fantastic job in reaching the playoffs and a lot of credit needs to go to Bob Jones and his coaching staff for getting the most out of the group.”

Nineteen year-old captain and 2015 MasterCard Memorial Cup overtime hero Anthony Cirelli, who signed with the Tampa Bay Lightning last season, returns to the club after leading the Generals in scoring.

“Anthony means everything to our team,” Hunt remarked. “I’ll never get tired of the story behind his success. He typifies the work ethic, commitment and character of what it means to be an Oshawa General.”

Cirelli, who originally made the team as a free agent invite to training camp in 2014, tallied 21 goals, 38 assists and 59 points in 62 games. He attended Canada’s National Team Development Camp this past summer.

“If you peel down the layers a little further, you’ll find that a lot of his success can be attributed to coming from a tremendous family and he’s a great example to the players throughout our league of how to conduct yourself on and off the ice,” Hunt noted.

“As much as we’re about developing young players, you have to have those big, experienced leaders in your lineup,” said Hunt. “We’re really happy with our overage situation and we expect big things from both Joe and Alex up front.”

With a wealth of experience ahead of them on the depth chart, rookies in first round selection Danil Antropov and second round pick Serron Noel will be provided the time and opportunity early in the season to make the transition to the OHL.

“Mitch is going to play a lot,” said Hunt, “but we want to be smart in how we manage his minutes. We have some guys back there who can help distribute the workload. No doubt, Mitch is a number one power play guy and anytime you have a smooth-skating, puck-moving defenceman like him, it impacts the way your team can play the game.”

Sophomore standout Riley Stillman, fresh off being selected by the Florida Panthers this summer, will see an increase in responsibility while other veterans in Daniel Robertson, Stephen Templeton and 18-year-old Sean Allen will battle for time alongside youngsters William Ennis, Matt Stoia and Jaimen Allison.

Jeremy Brodeur, whose tremendous 19-year-old season helped the Generals get back to the playoffs, will return as an overager in goal.

“If your goaltender is your best player most nights, you know you’re being given a chance to win games,” said Hunt of Brodeur. “Sometimes it isn’t a fair thing to him, but we’ll continue to look to Jeremy to win us the odd game that we don’t deserve to win.”

With a wide open East Division and 80-year festivities on the horizon, it’s an exciting time to be around the Oshawa Generals.

“Honestly, I wish the season started today,” Hunt said. “We’ve got a great group of players here, a devoted fan base and a big season ahead of us, so let’s get going.”

2019-20 Recaps
Wednesday Highlights: Overtime winners all around
37 mins ago