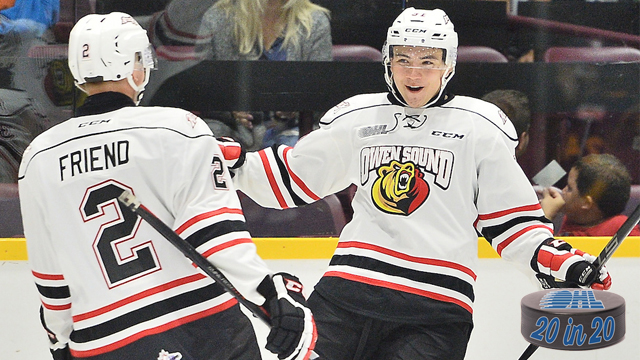 With solid goaltending, size and speed throughout the lineup, the Owen Sound Attack will stick to their hard-hitting brand in 2016-17.

After being the only team to solve the eventual Mastercard Memorial Cup Champion London Knights in the OHL Playoffs last spring, the Owen Sound Attack are back to battle it out in what many deem the most competitive division in the Canadian Hockey League.

The Attack managed to take two games from the Knights before being eliminated in the first round as London went on to win their next 17 straight contests.

Owen Sound brings a competitive edge to the Midwest, contending with London, Kitchener, Erie and Guelph. The Attack continue to be a model of consistency, reaching the playoffs in each of the six seasons that have followed their first OHL Championship back in 2011.

“You look at our division and there aren’t too many easy nights or free points for the taking,” said Attack general manager Dale DeGray. “We certainly work for it, but one of the best ways to get better is by going up against the best.”

From the net out, the Attack look to have the pieces in place to be a formidable opponent on any given night this season.

“We’ve certainly been fortunate to have had a number of outstanding goaltenders come through here,” said DeGray. “The latest being Michael McNiven.”

McNiven, who was signed to an entry-level NHL contract by the Montreal Canadiens as an undrafted free agent last season, provides the Bears with the stability to go up against the best the Western Conference has to offer.

“We’ve had the privilege of seeing Michael mature as a goaltender and as a young man,” noted DeGray. “He’s quick, he’s confident, and boy, does he battle. I haven’t seen too many goaltenders battle for pucks the way that he does.”

The Owen Sound blue line in front of McNiven remains a point of strength for the club.

Overage captain Santino Centorame, who scored 14 goals from the back end last season, will attend training camp with the St. Louis Blues.

“I think Santino is one of the most underrated defencemen in the OHL,” said DeGray. “When we got him from London a few years ago he was a really big add for us and he’s just continued to get better. I think people started taking note of what Santino can do last season, and I expect there’ll be more to come in the months ahead.”

While DeGray works on making some of those tough decisions, the Attack enter 2016-17 with sure fire talent up front in sophomore sensation Nick Suzuki who burst onto the scene with 20 goals as a 16-year-old last year.

It was a privilege to play for @HC_Men overseas this past week. Thanks @HockeyCanada for such a great experience pic.twitter.com/K8DVCObSBT

“Nick is incredibly smart,” said DeGray of the 14th overall pick of the 2015 OHL Priority Selection. “He’s got an uncanny ability to thread passes to teammates in motion, often times through traffic. He’s also not as small as a lot of people think he is. He’s got a ton of upside and is a cornerstone of our team’s future.”

Suzuki joins fellow former first round pick Ethan Szypula through the middle while Finnish firecracker Petrus Palmu returns after potting 23 goals a year ago. Sophomores Kevin Hancock and Matt Struthers also look to factor prominently into Owen Sound’s attack while big power winger Jonah Gadjovich has put a lot of work into his skating over the offseason as he enters his draft year.

Like Szypula and Suzuki before him, the Attack nabbed crafty offensive centreman Aidan Dudas in the first round of the 2016 OHL Priority Selection. That Parry Sound, ON, native was the OMHA ETA’s Minor Midget Player of the Year last season while also representing Canada at the Youth Olympic Winter Games in Norway, returning with a silver medal.

With a well-balanced depth chart, DeGray is optimistic about the Attack’s outlook under accomplished head coach Ryan McGill who guided the Kootenay Ice to a Mastercard Memorial Cup title in 2002.

“Our success last season and our ability to compete in that London series has to warrant some credit going to our coaching staff,” DeGray remarked.

“You have to remember, Ryan McGill was always a WHL guy and he came in not knowing much at all about our league. He’s got a year under his belt now and our returning players know what he expects and how he wants them to play.”

The Attack start the year with six of their first eight contests on the road, giving them a challenging start to another season in the mighty Midwest.

2019-20 Recaps
Wednesday Highlights: Overtime winners all around
58 mins ago