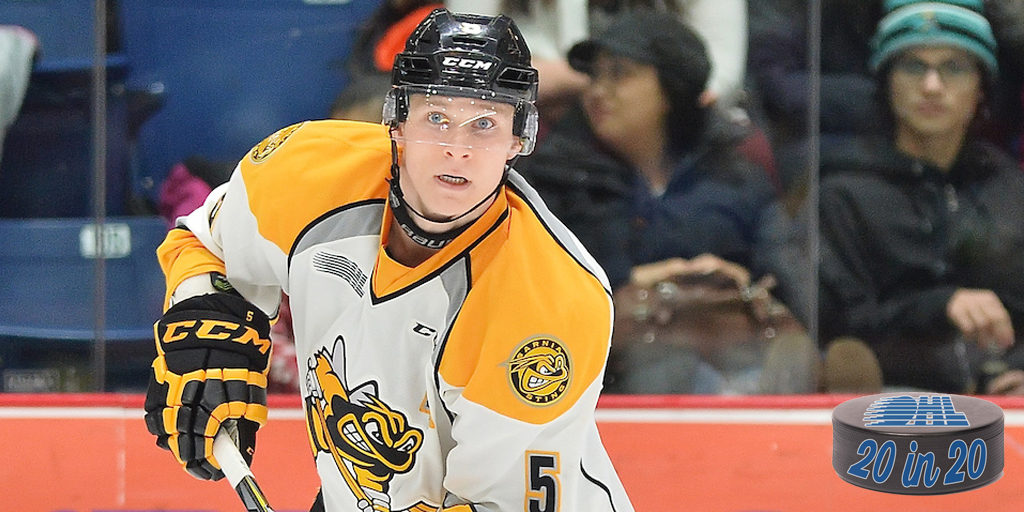 Coming off a historic season, the reigning West Division champion Sarnia Sting start the year with more questions than answers as Pavel Zacha and Travis Konecny head to NHL camps.

Though the future of two of the CHL’s premier forwards in Sarnia remains up in the air, the Sting are still shaping up to be a competitive force in the West Division.

Pavel Zacha, who recorded a pair of assists with the New Jersey Devils in his NHL debut last spring, will join Philadelphia Flyers first round pick Travis Konecny in heading off to training camp and there’s no knowing if the Sting will see either return for the 2016-17 season.

“It’s ultimately something that’s out of our control and we just have to go a day at a time and basically have a blueprint for a number of different scenarios,” said Sting general manager Nick Sinclair. “If we’re fortunate enough to get one, or both of them back, it’s definitely going to be a significant boost to our club.”

The Sting have plenty to play for this season. The club’s first West Division title since 2004 that included a franchise record 42 wins and 91 points was overshadowed in the first round last spring as Sarnia fell to Sault Ste. Marie in seven games.

“We had some pretty big expectations heading into the playoffs and felt we had a strong group, but it didn’t go the way we expected and that was disappointing,” recalled Sinclair. “In saying that, we had a talented team that lacked playoff experience. I can tell you from seeing these guys at camp that they’re hungry and haven’t forgotten what happened. Sometimes you have to falter before you can move forward.”

Though the unknown fate of Zacha and Konecny is a main storyline, the Sting have plenty of other ammunition throughout the lineup that will have them in the thick of things this season regardless of the outcome.

Up front, St. Louis Blues second round pick Jordan Kyrou will see an elevated role while NHL picks in Nikita Korostelev (Toronto) and Anthony Salinitri (Philadelphia) will also be counted upon. The Sting also feature a pair of accomplished import forwards in St. Louis prospect Filip Helt out of the Czech Republic and top 2017 NHL Draft hopeful Adam Ruzicka out of Slovakia.

Sophomore winger Ryan McGregor will be one to watch as well after he put together a solid rookie campaign that included 24 points (11-13–24) over 58 games as a 16-year-old.

On the back end, Arizona Coyotes first round (16th overall) selection Jakob Chychrun returns for his third OHL season.

“He’s got all kind of tools and will be a really good pro,” said Sinclair of the former first overall pick in the 2014 OHL Priority Selection. “He’s a real competitive kid who wants to be an elite player. He’s the leader on our blue line, but we also see him as one of the top defencemen in the country. He comes in and does things on a day-to-day basis the way a pro should and he leads by example.”

Chychrun will be the frontman on a Sarnia blue line that includes overagers Kevin Spinozzi and Jeff King. The Sting are anticipating that overage candidate Josh Jacobs will spend the season with the AHL’s Albany Devils.

“Both Kevin and Jeff are going to be big parts of our defence as 20-year-olds,” said Sinclair. “We see them as two of the top overagers in the league. As for Josh, he’s been signed by New Jersey and will be attending their camp. We expect that he’ll be in their AHL plans for the season, but crazier things have happened. He is coming off a great season and the deal he signed was well deserved.”

Veterans in Alex Black, Connor Schlichting and 19-year-old free agent signing Jordan Ernst will undoubtedly be in prominent roles for the Sting while Kelton Hatcher, Braden Henderson, Derrick Johnson and former GOJHL Rookie and Defenceman of the Year Franco Sproviero vie for spots to round out the back end.

As he was to start the season last year, 19-year-old Justin Fazio will be the man in goal for Sarnia. He went 24-13-3-1 with a 2.68 goals-against-average and a .902 save percentage in 41 games last season. The Sting brought in overager Charlie Graham from the Hamilton Bulldogs for the stretch run after Christmas.

“Justin has all the tools and ability to be an elite goalie in our league,” said Sinclair. “He’s basically had his first full season in the league last year and he played very well. We’re expecting big things and are confident that he can be in the upper echelon of OHL goaltenders this season.”

Though the uncertainty remains, the Sting are in good shape entering 2016-17 with a number of returning offensive producers and Chychrun anchoring an experienced blue line.

“There’s a solid nucleus of guys returning that are coming off a very successful season followed by adversity in the playoffs,” noted Sinclair. “What those guys went through will be a huge motivator for what we do this year. We’re taking the finish to last season as something we can learn from and as a result, be better in the days ahead.”