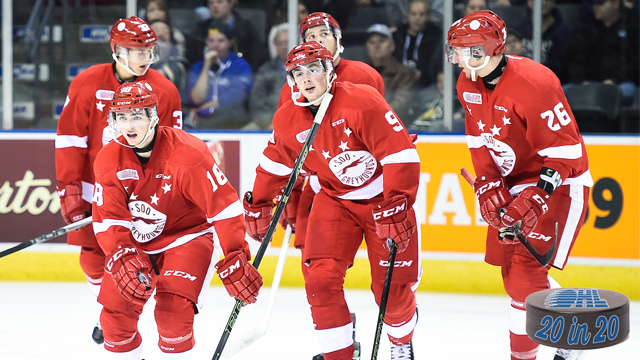 With strength on the wings and speed to burn, the Soo Greyhounds look to set the pace in the West Division.

After reaching the Western Conference Finals in 2015, the Soo Greyhounds suffered heavy losses to graduation, but returned to reach the second round of the OHL Playoffs last spring after upsetting West Division champion Sarnia in a seven game thriller.

The Hounds, who lose just one big piece of their high-powered offence from last season in Gabe Guertler, are back to take on all comers in what looks to be a very competitive West Division.

“Our offence is definitely a strength,” said third year general manager Kyle Raftis. “Any time we had any amount of sustained success last year was when we were playing to our depth and not just having that first or second line going. We’re returning a lot of forwards this season, so Drew Bannister and his staff will have no shortage of options available to them.”

While the Hounds are young through the middle, they boast some of the league’s best wingers in Boston Bruins first round pick Zach Senyshyn who is currently recovering from an appendectomy, veteran captain Blake Speers, intense competitor Boris Katchouk, overager Bobby MacIntyre and NHL picks in Jack Kopacka and Tim Gettinger.

With sophomores Liam Hawel and Morgan Frost showing promise at centre, Raftis says offensive combinations will be a matter of seeing what works.

“We also have Swedish centreman Otto Makinen, Hayden Verbeek and rookie Barrett Hayton who can play through the middle,” Raftis added. “We’ll take some time to see how guys come together. We have the veteran wingers in our lineup who can help out a younger centreman.”

While goals shouldn’t be hard to come by, the Greyhounds will look to a younger defence corps to take over in 2016-17, one led by veterans Gustav Bouramman and Colton White.

Bouramman, who recently signed with the Minnesota Wild and White, a New Jersey Devils prospect, will attend NHL training camps this fall.

“Both Bouramman and White played a lot of tough minutes for us last season,” said Raftis. “We think some of the younger members of our blue line are ready to take a step forward and assume larger roles. There was a lot of positive progression in the second half of last season and into the playoffs that has us eager to see what’s in store.”

In goal, Joseph Raaymakers looks poised to take on the starter’s job as overage veteran Brandon Halverson attends camp with the New York Rangers with the likely outcome of turning pro.

Boris Katchouk (@russianrocket13) was fourth in SSM scoring with 51 pts in 63 GP.

“Right now we’re prepared for Brandon to remain with the Rangers organization, and confident that Joseph is ready for a bigger role with us,” Raftis said of the goaltending situation.

“Joseph has been at his best when he’s had the opportunity to string consecutive games together and see a lot of minutes. With Halverson being away at World Juniors each of the past two seasons, he has stepped in and done a great job. I know he’s put a lot of work in this summer and I think he’s out to prove some people wrong after he was passed over in the NHL Draft this past summer.”

After exceeding the expectations of many in the playoffs last spring, the Greyhounds enter the new season promising to be an exciting group to keep an eye on in the months to come.

“The West is always tough,” said Raftis. “We’ll be competitive, but we’re also not losing sight of development. We have a great group of young players that we want to bring along the right way.”

Fittingly, the Greyhounds have formed the reputation of being one of the OHL’s fastest teams, something that will be a big part of any success they enjoy this season.

“We rely on our speed to play a fast-paced, high-tempo game,” concluded Raftis. “It’s a long season, but we want our guys to bring that high-paced game each and every night.”

2019-20 Recaps
Wednesday Highlights: Overtime winners all around
59 mins ago