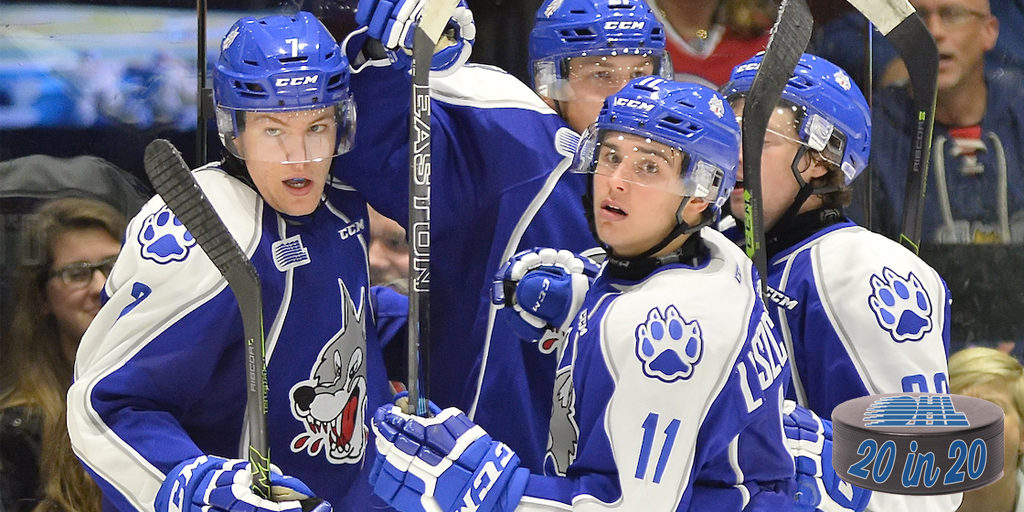 Back-to-back seasons outside of the Eastern Conference playoff picture have a Wolves organization flush with talent hungry for more in 2016-17.

With the foundations rebuilt and young skill on the rise in Sudbury, the Wolves are optimistic that their absence from the OHL Playoffs will come to an end this season as they look to ascend the Central Division standings in 2016-17.

Not only is skilled youth coming through the pipeline, but second year general manager Barclay Branch has made it a priority to stabilize the depth chart with reliable veterans, bringing in established competitors in Ryan Valentini, Zach Wilkie, hulking winger Liam Dunda, goaltender Zack Bowman and MasterCard Memorial Cup champion Aiden Jamieson in preparation for what folks in Sudbury hope can be an improved season across the board this year.

“We feel good about the guys that we’ve brought in,” said Branch of the club’s veteran acquisitions. “Not just as hockey players but as people too. We think they’ll be good veteran players for our young guys to look to for guidance and support. That’s just as important in our estimation as scoring goals and picking up assists. These are guys who are going to help us bring along our young nucleus moving forward.”

That young nucleus is headlined by a pair of standout franchise players selected in the OHL Priority Selection in 2015 first overall pick David Levin and defenceman Owen Lalonde who was chosen by the club second overall this past April.

Add to that equation 18-year-old Russian winger Dmitry Sokolov, whose 30 goals last year were the most by a Wolves rookie since 1997, along with the highly touted 17-year-old forward quartet of Macauley Carson, Ben Garagan, Shane Bulitka and Owen Lane, and the Wolves ooze potential entering the new campaign.

#mnwild draft pick Dmitry Sokolov has all the talent, just looking to put it together now: https://t.co/gQSIyFswZf pic.twitter.com/3XjfJRL63F

“What we saw last year was a small glimpse of what we think Dmitry Sokolov is capable of,” said Branch of the newly drafted Minnesota Wild prospect. “I’ve never seen a player who loves scoring goals more than he does and it goes without saying that when he’s on the ice and the puck is in the offensive zone, we want to get it to him because he has a knack for scoring and creating offence. His 30 goals were a bright spot of an otherwise tough year for our club.”

As for the 1999-born class of players entering their second season of junior eligibility, Branch says their development and future contributions are a very important part of the Wolves’ future.

“That 1999 draft marked a turning point for our franchise, and the guys that we brought in are integral core pieces of our organization,” Branch added. “We’re very excited to see them back in Sudbury and to see how hard they’ve worked over the summer to enable themselves to take another step forward.”

Montreal Canadiens prospect Michael Pezzetta and 18-year-old sophomore Alan Lyszczarczyk will also factor prominently into the Wolves’ identity up front this season, while returning veteran Kyle Capobianco, a third round pick of the Arizona Coyotes in 2015, will anchor the blue line.

“Kyle, in our estimation, is one of the top defencemen in junior hockey right now,” noted Branch. “He’s an exceptional talent, a player that catches your eye every time he is on the ice just because of his poise and intelligence. He does everything for us and he’ll continue to see big minutes as he helps us bring along young talent on the back end in Owen Lalonde and Conor Ali.”

We continue our profiles of our 2015 #NHLDraft picks with third-rounder Kyle Capobianco READ http://t.co/ZfLR1Q8GAR pic.twitter.com/mp0KKaSClH

Veteran 19-year-old goaltender Zack Bowman and up-and-coming 17-year-old Jake McGrath stand as the last line of defence for the Wolves, tasked with the job of helping them cut down on a league-worst 328 goals against in 2015-16.

The Wolves enter a new era of hockey in Sudbury under new owner Dario Zulich. The club named former Carolina Hurricanes scout Rob Papineau as Vice-President of Hockey Operations this past week while Branch continues his work as general manager.

“We have high hopes for this season,” Branch said. “We play in a division of well-coached teams and none of them takes a step backward very often. There aren’t many easy nights, but having said that, our expectation is to be not just a playoff team, but to get ourselves seeded as high up in the Eastern Conference as possible. When you miss the playoffs two years in a row, that has to be the expectation.”

With a good balance of experienced veterans and one of the OHL’s most talented youth movements, the Wolves could turn heads and bring a shake-up to the Central Division hierarchy in the months to come.

Remembering the Humboldt Broncos
1 hour ago