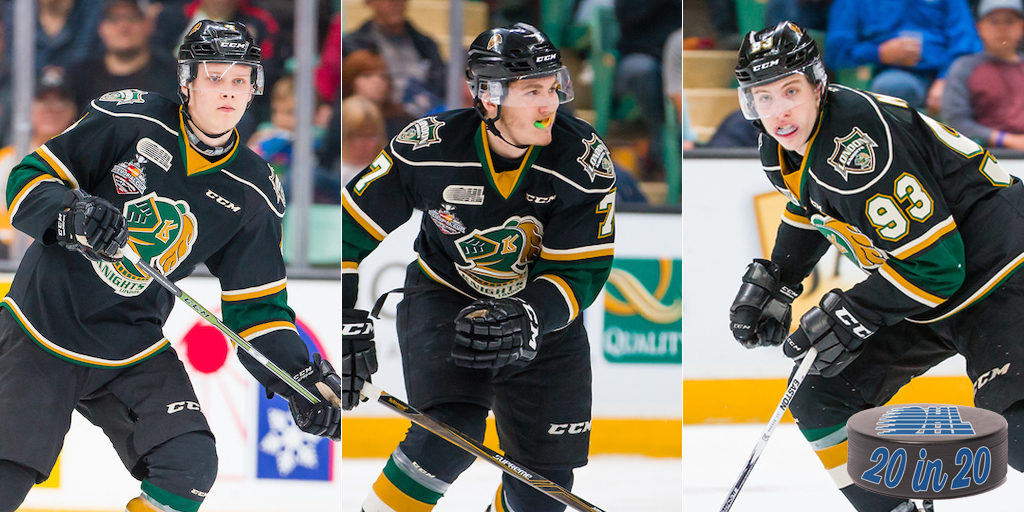 After emerging as cornerstones of a Mastercard Memorial Cup title effort that included a 17-game winning streak and a collection of unforgettable moments, Mitch Marner, Olli Juolevi and Matthew Tkachuk are shooting for the stars in 2016-17.

The London Knights trio wowed fans across the country last year and one of them could be coming to a Canadian hockey market near you as soon as this season.

“Some of the things that you see him do on the ice in games and more importantly in practice just confirm what an exceptional player he is,” said Knights general manager Rob Simpson. “As an 18-year-old co-captain last season, he was a big part of things off the ice too. The way he developed relationships with younger players and showed them how to be competitive and bring that mentality everyday was something to see. His leadership was very valuable to us.”

Back at Leafs camp for a second time, he’s feeling physically stronger than he was a year ago.

“I feel more comfortable with the puck and a lot more patient with the puck,” he told Sportsnet.ca’s Michael Grange. “I just need to make sure when I come into the games I play the same way and I’m not stressed and can play my game.”

While Marner is putting his best foot forward in Toronto, Knights linemate Matthew Tkachuk is competing for a spot with the Calgary Flames after being the club’s first round (6th overall) pick this past summer.

“When some of our guys returned from playing against him at the World Juniors, they quickly realized why guys don’t like facing him around the league,” said Simpson. “He’s ultra-competitive and his hockey sense is very elite. He likes to get under the skin of opponents and initiate contact to gain space for himself in the offensive zone. He plays with an intensity and a fire that’s above what a lot of guys possess nowadays.”

Tkachuk helped the Flames play to a 2-0-1 record at the Penticton Young Stars Rookie Camp this past weekend, a tournament that also included the Edmonton Oilers, Vancouver Canucks and Winnipeg Jets.

“The first two games, I felt really, really good,” he told the Calgary Sun’s Wes Gilbertson. “I feel like if I can play that way or step up my game a little bit, I have good shot to impress at training camp.”

“Olli has a lot of deception in his game,” Simpson noted. “He’ll be coming off the ice and looking to move the puck and he’ll look one way and see the play developing out of the corner of his eye and send a pass in that direction. He has that special ability to envision things and make great passes. He ran our power play all season and was running Finland’s as a 17-year-old in the World Juniors which isn’t something you see very often.”

Canucks brass had a good look at Juolevi in Penticton, coming away impressed with his poise and patience.

“He’s got a lot of poise and he reads the game well. His hockey sense is a premium. Some things you just don’t have to teach really good players.”

That’s the big question for the London Knights, who embark on their title defence in 2016-17, eyeing the opportunity to repeat with the 2017 Mastercard Memorial Cup taking place down the 401 in Windsor.

At this point there’s no knowing. Marner, Tkachuk or Juolevi will all get long looks out of training camp.

“You have to plan what you’ll do if you get some of these guys back, but on the contrary there’s always the possibility that they aren’t going to return and you have to adjust your depth chart accordingly,” said Simpson of the situation. “We’re at the hands of the NHL teams and what they wish to do with their prospects.”

While the presence of any one of those three would offer a big boost to an already talent-laden roster, the Knights will draw from their deep pool of depth early this season as they try and get out of the gate strong in the Western Conference.

The quest for back-to-back prominence begins Wednesday night in Sarnia.