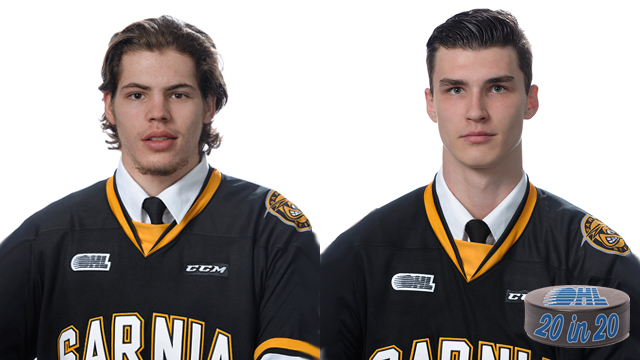 While the jury often remains out on some CHL Import Draft selections that make the long trek to North America, the Sarnia Sting are quite confident that their two latest additions will be valuable pieces in relatively short order.

Both players, Sting general manager Nick Sinclair says, will have something to offer.

“They’re different players for sure, but they’re both big-time competitors who want to become better hockey players and with our forward situation being what it is right now, they’re both welcome additions.”

That situation sees star centreman Pavel Zacha (New Jersey Devils) and heart and soul winger Travis Konecny (Philadelphia Flyers) heading off to NHL training camps, with no sure timetable for a return.

With #TC2016 right around the corner, Filip Helt arrives in Sarnia for the first time #BeTheBuzz ? pic.twitter.com/CSIBCEqUcG

Should one or neither of the two come back for 2016-17, Helt, Ruzicka and a cast that includes Jordan Kyrou, Nikita Korostelev, Anthony Salinitri and Ryan McGregor would be expected to carry the offence.

Helt, who was a seventh round selection by St. Louis this past summer, has already gained the admiration of Sinclair and the Sting brass.

“Filip has a great attitude toward life and the game,” Sinclair commented. “You won’t find many kids in the league who play as hard as he does. He can really fly out there and he plays the game the right way.”

“Filip will open some eyes this season,” Sinclair continued. “He’s got skills that catch your attention.”

While Helt joins McGregor, Louis Latta and Curtis Egert on the left side in Sarnia, 17-year-old centreman Adam Ruzicka comes to the OHL looking to make a name for himself. The 6-foot-4, 202Ib. pivot was included on NHL Central Scouting’s 2016-17 Futures List.

“He’s big, has intriguing tools and he plays the game at both ends of the ice,” said Sinclair. “We’ve already observed that he makes good decisions with the puck and has that special ability to make the players around him better. Each day we see him learning more and more and it’s just the tip of the iceberg of what we think he’s capable of.”

A native of Bratislava, Slovakia, Ruzicka registered 14 goals, 16 assists and 30 points in as many games with Parubice’s Under-20 squad in the Czech junior ranks last season. He also had a strong showing for Slovakia at both the World Under-18 Hockey Championship and the Ivan Hlinka Memorial Tournament, recording four points (2-2–4) in each showcase.

“Like any player coming over from Europe, both of these guys will need some time to adjust to the playing dimensions,” said Sinclair, “but we see both of them playing a big part in what our team does this season and into the future. It’s exciting to be able to add two players as good as these guys are.”

While Sarnia will have to contend with the Mastercard Memorial Cup host Windsor Spitfires in the division, the Sting, regardless of the fate of Zacha or Konecny, look like they’ll be capable of providing a vigorous defence of their West Division crown.