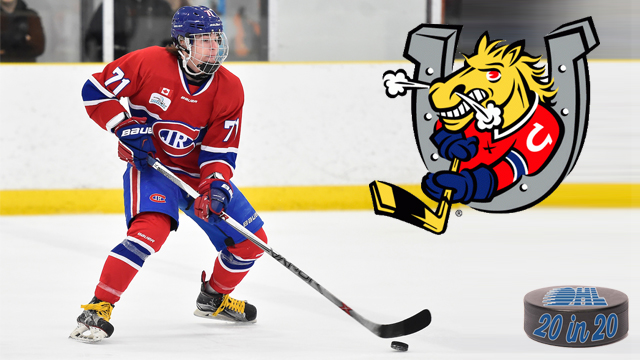 In their infancy, the Barrie Colts were a haven for European born players to make their mark.

Such late 90’s names as  Jan Bulis, Denis Shvidki, Alexandre Volchkov and Martin Skoula established themselves as Colts, proving to be impact players as the club quickly became one of the league’s most competitive franchises.

The Colts made a big splash last week, bringing in 16-year-old winger Kirill Nizhnikov, a Russian-born talent who follows graduate Rasmus Andersson and the recently moved Julius Nattinen in the Colts’ resurgence on the European front.

Though born in Russia, Nizhnikov was a standout with the GTHL’s Mississauga Rebels in Bantam prior to putting up 37 points (23-14–37) in 27 games with the Toronto Jr. Canadiens as a Minor Midget last season.

“Kirill is a dynamic player and a guy in the 2000-age group that was as OHL ready as anyone in the draft,” said Colts general manager Jason Ford, who sent a treasure trove of draft selections back to the Mississauga Steelheads in return for the coveted seventh overall pick. “He’s got good size, strength and he skates very well. He has elite skills and already shoots the puck at an OHL level.”

Nizhnikov joins defenceman Tyler Tucker, Barrie’s first round (14th overall) pick in April, as one of two first round picks on the roster.

Big 6-foot-3 centreman Jack McBain, who the Colts selected 20th overall in the spring, is still undecided on what path he’ll take and has committed to play with the OJHL’s Toronto Jr. Canadiens for 2016-17.

“The family needs more time to make a decision on where Jack wants to go with his career,” said Ford of the situation. “He did come to training camp and had a really good experience. His performance would have earned him a spot on this team and quite frankly we feel he’d be an impact player as a 16-year-old.”

McBain, whose father Andrew put up 120 points with the North Bay Centennials in 1983 before going on to a 10-year NHL career, joined Tucker at Canada’s National Under-17 Development Camp in Calgary this past summer.

“We’ll be keeping the dialogue open with Jack and his family,” Ford added. “We certainly remain hopeful that we can come to an agreement somewhere down the road.”

As for Nizhnikov, the Colts are excited to see what he has in store for the upcoming season, while also tempering expectations on the young standout.

“He’ll need some time to get used to the league,” said Ford, “but we truly believe that he’s a guy that is going to put up a lot of points for us over the course of his career.”

Seventh-year head coach Dale Hawerchuk will be tasked with overseeing a young Colts offence this season, one that has featured such dangerous scoring threats as Kevin Labanc, Andrew Mangiapane and Joseph Blandisi in recent years.

The Colts are hopeful that Nizhnikov can lead Barrie’s offence into the future.

“When you’re young and somewhat retooling, you want pieces like (Nizhnikov) for sure,” Hawerchuk told the Barrie Examiner’s Gene Pereira. “He kind of fit in to what we’re trying to do, really well.”

Though the Colts will undoubtedly need some time to develop their emerging regime of young talent, Kirill Nizhnikov will be one player to keep an eye on in the months to come.