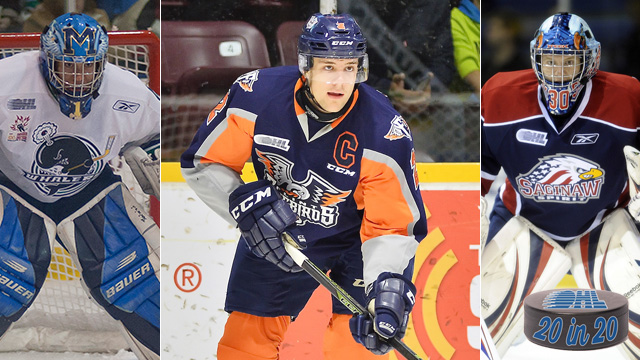 For 12 of the past 13 seasons, the Peters family has been making contributions in the Ontario Hockey League.

The Blyth, Ontario based trio of Justin, Anthony and Alex Peters has made its mark on the league, with the youngest, Alex, entering his final year of eligibility as an overage defenceman with the Flint Firebirds.

The 20-year-old captain was a third round pick of the Dallas Stars in 2014 before a knee injury derailed his 2014-15 season in Plymouth. Peters went unsigned this past summer, bringing him back to Flint for what’s sure to be an important time in his hockey career.

“It would have been nice to get a contract, but that’s not how it worked out,” said the 6-foot-4, 217-pound defenceman. “I’ve still got another season here and hopefully, through my hard work over the summer, I can show teams what I’m capable of as a veteran.”

Peters, who will attend training camp as a free agent invite with the Carolina Hurricanes this month, has endless stories to tell from his childhood growing up with three older siblings in a rural Ontario town of just over 1,000 people.

Blyth is approximately 20 minutes east of Goderich and the shores of Lake Huron.

“Growing up there was great,” he said. “All your best friends were just a walk down the street. We’d grab the nets and sticks and play road hockey for hours.”

Small-town life has its perks, as Peters can attest.

“My brothers and I were fortunate enough to know the arena guy in town. On a snow day we could go over to the rink and have as much ice as we wanted for like three dollars. It was a lot of fun, and probably not something you’d be able to pull off in the city.”

The oldest of the Peters family, Justin spent last season with the AHL’s Hershey Bears. Known for his competitive edge during his OHL days, Justin, 30,  played with the Mississauga St. Michael’s Majors and Plymouth Whalers from 2002-06 and has gone on to play 80 games in the NHL between Carolina and Washington.

Following older sister Brittany, who joined Alex on the blue line during her playing days, third child Anthony Peters manned the crease for five different OHL clubs from 2006-11. Upon graduating, Peters went on to have tremendous success with the Saint Mary’s Huskies of the AUS, earning CIS Goaltender of the Year honours in 2015. Peters, now 25, comes off an excellent campaign with the ECHL’s Florida Everblades.

“It was funny, both my older brothers were goaltenders, but when it came to road hockey I always got stuck in net because they wanted to score,” said the youngest. “Of course, being so much younger I didn’t really have a choice.”

With so many young players competing at the Triple-A level, parents Jeff and Janice were kept busy, trekking to rinks across the province as the boys played for the Huron Perth Lakers.

Athletes of the Year – Justine Colley and Anthony Peters pic.twitter.com/iP4Dn5CjT4

“To this day we’re all very thankful that they invested so much in us and gave us every opportunity to succeed,” Peters said. “They’re the biggest reason we’ve all excelled.”

Though his career aspirations outside of the game are set on pursuing a career in medicine, Peters hasn’t taken his eyes off a hockey career, looking to do big things this season.

“I’m a fifth-year guy now and have been entrusted with a lot of responsibility as a leader. It’s been great to be a part of one organization for so long and now I can help the next group of young players get settled as we get started on a new beginning in Flint.”

Firebirds GM George Burnett, who has been around the OHL to see all three Peters boys develop, emphasizes Alex’s valued role coming into the 2016-17 season.

“We look to Alex as the leader back there. Throughout this offseason he has remained tremendously positive about the opportunity here in Flint. It would be very easy for him to want to be somewhere else, but I think he appreciates the structure and the plan that’s been put in place. He’s very close with his teammates and they look to him for guidance.”

“I know this is a big year for him,” Burnett added. “As he continues to lead the way in improving our program, I think people will recognize his character and leadership abilities as we move forward.”

With the past behind him, Peters remains focused on the future in Flint as he wears the ‘C’ with pride.

“It’s special to be a part of a new beginning here,” he said. “I love my billets and we have a great new coaching staff that is trying to set out a new mentality and way of going about things.”

“I’m just focused on setting a good example for the Firebirds to come and hopefully, even through this time, we can have success and play some good hockey.”