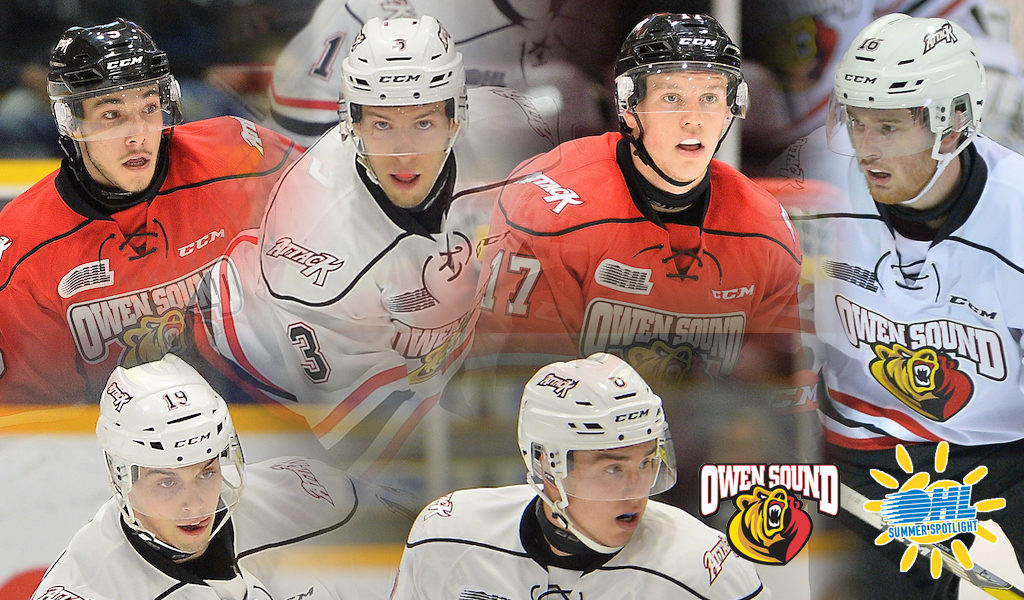 The Owen Sound Attack open camp at the Harry Lumley Bayshore Community Centre this week and the depth chart as it stands today ensures a highly competitive environment.

The Bears come off consecutive second place finishes in the highly competitive Midwest Division and have won 30 games or more in eight straight seasons. It’s needless to say expectations are always high in the community of approximately 22,000 and this year will be no different.

Perhaps the biggest storyline leading into Attack Training Camp is the abundance of eligible overage returnees that will battle over four available roster spots to begin the regular season. The team would have to cut down to three overage players come January.

WATCH THIS: Game 4 better known as the @KevinHancock98 show 🐻

Vancouver Canucks prospect Jonah Gadjovich is one potential overage candidate who looks to be out of the picture after signing an entry-level deal last season. Overage goaltender Olivier Lafreniere recently signed with the Wellington Dukes Jr. A club for the 2018-19 season.

“I don’t think Jonah will be back,” explained Attack GM Dale DeGray, “but the rest of those guys are all players that could be here and deserve to be in the league this season.

“We have some tough decisions to make.”

Spots up front could be limited as Philadelphia Flyers prospect Maksim Sushko and newly added German forward Manuel Alberg will serve as the club’s two imports. Things will be competitive, but DeGray says he’s happy to have veteran options up front that could compliment possible returnee and Vegas Golden Knights first round pick Nick Suzuki and Los Angeles Kings prospect Aidan Dudas.

Hancock in particular has drawn past interest from NHL clubs, attending Development Camp with the New York Rangers this past June before receiving an invitation to attend camp with the Buffalo Sabres next month. He was also voted the Western Conference’s best defensive forward, second-best faceoff man and second-best penalty killer in the 2018 OHL Coaches Poll.

“I’d rather be making my choices from strengths as opposed to trying to find someone who is going to fit in from another team,” he said. “I’ve always believed that you’re better off with overagers who have invested some time into the team, the community and the organization. They know how it works and they know what the expectations are.”

On the blue line, defensively sound rearguards in Bourque and Cameron are both safe options while the fate of the offensively talented Durzi hangs in the balance. A late bloomer, Durzi was a second round pick by Toronto this past June after being passed over last summer. The 19-year-old put up 49 points (15-34–49) over 40 games last season, overcoming an ankle injury that sidelined him for a portion of the season.

A year ago today I sat through 7 rounds of the NHL draft waiting for my name to be called and left hanging… today, I’m officially apart of the @MapleLeafs . Don’t let anything or anyone get in the way of your dreams. #LeafsNation pic.twitter.com/uX3npyfJ2d

“When I look at Sean, he’s really only played two-and-a-half OHL seasons,” noted DeGray. “I’m not too sure what Toronto has in store for him with regards to this season, and I know he wants to play at the highest level he can so long as he’s going to get opportunities to develop.

“I can assure you he’d be given every chance to carry the load with our club.”

With so many solid 1998-born players, DeGray has fielded interest from several other teams, but is waiting to see how things play out through the pre-season.

“I may very well have some decisions made for me here depending on what happens at the next level,” he said. “We ultimately have some really good players who are all deserving of a spot in the OHL this season and we’re just going to wait to see how things play out before we finalize anything.”