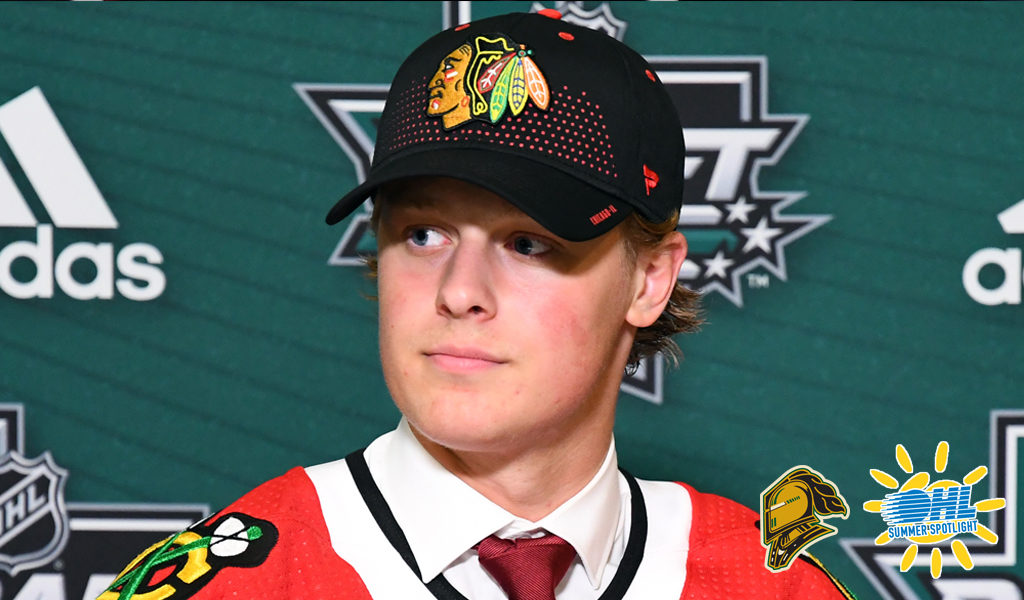 Considered by many as the OHL’s most dominant all-around blueliner last season, OHL Defenceman of the Year candidate Evan Bouchard will have a new sidekick this season as the London Knights have beefed up their back end.

While 25-goal scorer Bouchard was selected 10th overall by the Edmonton Oilers this past June in Dallas, London’s newest commitment Adam Boqvist heard his name called at eighth overall by the Chicago Blackhawks. Should he return from the Windy City following what’s sure to be a thorough look from the NHL club, the smooth-skating Swede would give the Knights another talented right-handed shot on the blue line.

Boqvist put up 24 points (14-10–24) in 25 games with Brynäs IF of Sweden’s top junior circuit last season. He was London’s second round CHL Import Draft selection in 2017.

“Boqvist is a finesse defenseman who is very skilled, possesses excellent vision and tons of talent. He is fun to watch and full of surprises on the ice.”

See the #Blackhawks Round 1 selection @BoqvistAdam in action! #NHLDraft pic.twitter.com/iA9dpvNazT

“If you saw our games last year you’ll know Evan saw the ice a lot for us and Adam was picked two spots before him,” said Knights associate general manager Rob Simpson. “We know he’s going to have a similar impact with us, play a lot of key minutes and step into a big role right away.”

It’s not the first time the Knights have brought in a highly-touted defender following his NHL Draft experience. The examples are actually numerous, with names such as John Carlson, Danny Richmond, Kevin Montgomery and Julius Bergman having joined the club in similar circumstances.

“When you see Adam play he’s an exciting player to watch,” Simpson continued. “He’s very creative and offensively he brings a great shot with a tricky release. He’s got that gamebreaking ability and I think our fans are really going to enjoy seeing him this season.”

Of course, Simpson and the Knights know as well as any OHL club that things don’t always go according to plan. London had to shuffle up the deck early last season after star defenceman Victor Mete (Montreal) and CHL Import Draft selection Jesper Bratt (New Jersey) both remained in the NHL.

The Knights have received commitments from both 2018 CHL Import Draft selections in first round (42nd overall) choice Matvey Guskov and second round selection Vladislav Kolyachonok (102nd overall). Guskov, a Russian forward and Kolyachonok, a Belarusian defenceman, are both eligible for the 2019 NHL Draft and are represented by the same agent in Dan Milstein.

With Boqvist being a first round NHL Draft selection the Knights are afforded the flexibility of being able to carry three import players into Training Camp.

“It’s a very high percentage Adam will be here with us this season,” Simpson told Ryan Pyette of the London Free Press. “Chicago’s plan is to have him develop here and have their staff come in and work with him. But again, plans change every day.

“All three will be here (at Training Camp). It’ll be an early chance for everybody to see all three of them.”

Unique to Boqvist’s story is his experience growing up with dyslexia, a learning disability that he was diagnosed with as a 10-year-old. Dyslexia makes it difficult for an individual to read or interpret words, letters and symbols.

ICYMI: #Blackhawks prospect Adam Boqvist isn’t going to let a learning disability get in the way of his NHL dreams.https://t.co/e3VZt0zg79

“A lot of people are dyslexic,” he recently told ESPN’s Emily Kaplan. “Some guys might not open up about it because they are embarrassed, but I think it is good to talk about. You need to know that it’s normal and it [does] not get [in the way] of achieving dreams.”

Boqvist will continue to serve as a good role model for kids with dyslexia as he pursues his NHL dream with the Knights this season. He’s also flying high on the radar of Sweden’s National Junior Team evaluators.  He’s had a great deal of success on the world stage, winning 2016 World Under-17 gold, 2017 Hlinka Memorial Cup bronze and 2018 World Under-18 Hockey Championship bronze. He’s a good bet to follow in the footsteps of first overall NHL Draft selection Rasmus Dahlin (Buffalo) who starred with the Swedish National Junior Team this past January as they settled for silver in Buffalo.

“Having seen Adam a number of times in person, I can tell you we’re getting a special talent,” Simpson noted. “His feet and ability to fend off opposing forechecks, skate himself out of trouble and make exceptional outlet passes are just the beginning of what makes him an outstanding defenceman.

“We’re looking forward to seeing him in green.”