OHL 20 in 20 Summer Spotlight: Bouchard gearing up for big season 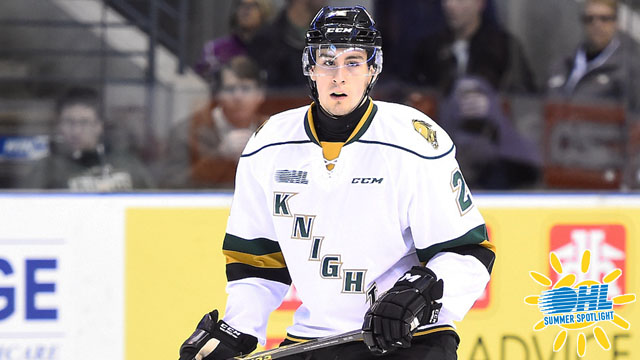 The London Knights have chosen defencemen in the first round of the OHL Priority Selection just twice in the past 12 years.

A late birthday, the 1999-born Bouchard enters his draft year on the heels of a 44-point sophomore campaign that included 11 goals, 33 assists and whole bunch of positives on the back end.

“I thought I handled the new responsibilities that came my way pretty well last season,” he said as he reflected on a year that saw the Knights finish with a 46-15-3-4 record in what some consider the most competitive division in the Canadian Hockey League.

“Having the chance to see friends like Robby Thomas (20th overall, St. Louis) and Alex Formenton (47th overall, Ottawa) go through this process last season was helpful and now it’s my turn.”

Bouchard, whose calling card is a heavy, accurate shot from the point, has had plenty of extra practice this summer. Former Knights assistant general manager Jake Goldberg put him in touch with Arizona Coyotes goaltending coach Jon Elkin, leading to some part-time work as a shooter at Elkin’s goaltending school when he isn’t in the gym for his daily fitness routine.

“Yeah every shot helps,” Bouchard chuckled. “Growing up I never had a finished basement, so I shot a lot of pucks down there. I started realizing that all the practice was giving me a pretty good shot in game situations, so I kept working hard at it and it has led to a lot of success for me.”

Bouchard turned heads with 18 goals from the blue line in his minor midget season with the Oakville Rangers and lit the lamp 11 times in London last season, but a good shot isn’t all he has going for him.

London Knights assistant coach Rick Steadman, a former OHL utility man who spent time both up front and on the blue line with the Knights and Guelph Storm from 2001-05, complimented Bouchard with a tempered but lofty NHL resemblance.

Congratulations to @EvanBouchard02 and Robert Thomas on bringing home gold at the @HC_WU17! ? #LK pic.twitter.com/AQkqDjeSLp

“It’s always tough to make comparisons when players are this age, so keep that in mind, but there are elements in his game that make you think of Drew Doughty,” said Steadman. “He’s got the shot, the stride and the smarts that catch your attention. Not only is his shot very good, but he is patient and knows how to find lanes that a lot of other guys often can’t.”

It just so happens that Bouchard has been a long-time fan of Doughty, a London native who skates at Budweiser Gardens over the summer.

A two-time Stanley Cup champion with the Los Angeles Kings, Doughty left quite an impression in his three seasons with the Guelph Storm from 2005-08, capping off his junior career with a World Junior gold medal and a Max Kaminsky Trophy as the OHL Defenceman of the Year in 2008.

“He’s a player I watch every chance I get,” said Bouchard. “Whenever he is on the ice here I take the opportunity to watch him and just see how he works. I know I still have a lot of work to do and I want to keep getting better this season.”

Bouchard is widely considered a player to keep tabs on ahead of the 2018 NHL Draft set to take place in Dallas next summer. He’s also on Hockey Canada’s radar after winning gold at the 2015 World Under-17 Hockey Challenge in Dawson Creek, BC while also representing Canada at the Ivan Hlinka Memorial Tournament last summer.

“There’s a lot to look forward to this season, I know there are going to be more minutes to play and more people watching me,” he said. “I’d love to have a chance to play in the Top Prospects Game and I want to make the most of the opportunities that come my way.”

Steadman, who oversees the London defence, says those opportunities will be plentiful as the Knights are in good shape to be competitive once again in 2017-18.

“Evan came in as a quiet kid, but we’ve seen him grow and open up a lot in the last two years. He’s ready for some bigger matchups and harder minutes this season and we’re going to be leaning on him a lot.”