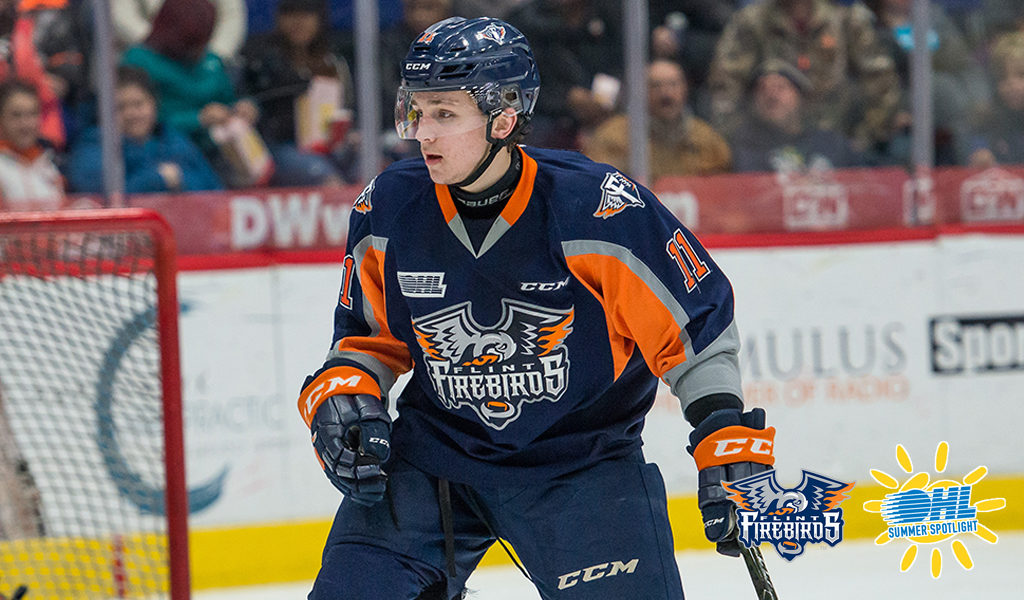 Dennis Busby suited up in just two games last season, but the Flint Firebirds’ right-handed shooting defender left such an impression on the Arizona Coyotes as a 16-year-old rookie that they selected him with their fifth round pick in this past June’s NHL Draft in Dallas.

After being one of the last cuts for Canada’s Under-18 Team last summer, Busby suffered a broken clavicle in the first game of the OHL Preseason Showcase at HarborCenter in Buffalo on Labour Day weekend, forcing him to miss nearly all of the 2017-18 season.

“I’m a guy who loves being at the rink, around my teammates and just thinking about hockey, but I have to say sitting in the stands last season was one of the toughest experiences,” he admitted. “We had a younger defence corps last year and you always want to be able to step in and help, but I knew I had to stay focused on getting back to full strength so I could be at my best.”

“We saw him somewhat as a 16-year old and we knew he was a player we’ve got to keep our eye on last year.” – Tim Bernhardt on @Dennisbusby11 https://t.co/TfW27Otg9m

Like another OHL defenceman in Hamilton’s (now Saginaw’s) Reilly Webb (6th round, Detroit) the year prior, Busby managed to leave an impression with an NHL club despite limited viewing. His play as a rookie that included 16 points (2-14–16) over 62 games in 2016-17 left Arizona wanting more.

“He’s an interesting kid,” Coyotes director of amateur scouting Tim Bernhardt told the club’s director of news content Dave Vest. “We saw him as a 16-year old and we knew he was a player we’ve got to keep our eye on.”

Busby’s positive attitude and team-first mentality throughout a trying season for both he and the club on the ice drew the admiration of head coach Ryan Oulahen who recently helped lead Canada to gold at the Hlinka Gretzky Cup in Edmonton.

“We were really excited to see Dennis get selected,” said Oulahen. “We saw the daily grind that he went through last year and all of the tough sledding with his injury. The smile never came off his face. He kept coming and working hard every day, running stairs during team practices and helping our coaching staff with video responsibilities.”

Busby, who grew up just outside of Barrie in Horseshoe Valley, was at home watching the draft with his family when the streaming feed cut out just before he was chosen at 145th overall. A friend quickly texted him the good news.

“It was an honour and a dream come true,” he told Vest. “Like everybody says though, being drafted is just the beginning.”

The 18-year-old will rejoin a Flint blue line that is a year older and more experienced to start 2018-19 led by Toronto Maple Leafs prospect Fedor Gordeev alongside other developing talents in Riley McCourt and sophomore Marcus Gretz.

“We kind of told Dennis at the end of last season that we’re making a big acquisition over the summer and his name is Dennis Busby,” said Oulahen. “We were happy with the progression of some of our other defencemen last season and now being able to add Dennis to the mix gives us what we feel is an improved defence corps.

“I don’t expect him to need to be eased into it,” he added. “I know he’s working really hard this summer and wants to be ready for game one.”

After being part of Flint’s first trip to the OHL Playoffs in 2017, Busby watched as his club missed the postseason last year. He returns to the Vehicle City optimistic and ready for action.

“I’m not sure how many people are talking about us right now, but we’ve got a good group of guys that get along great in the dressing room,” said Busby. “We have some guys in our lineup that are ready to take the next step I think and I’m really looking forward to getting back there and contributing.”