OHL 20 in 20 Summer Spotlight: Chmelevski a high achiever on and off the ice 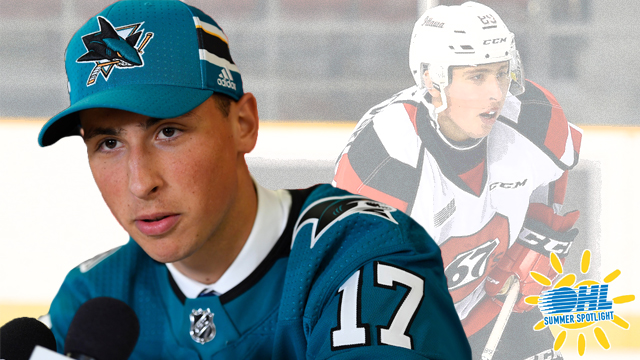 A well-traveled young man, Sasha Chmelevski‘s pro hockey foundation has been laid where it all began.

Originally a native of Huntington Beach, California, the 18-year-old was selected by the San Jose Sharks in the 2017 NHL Draft this past June in Chicago. Considered later in the proceedings than expected by many, Chmelevski didn’t hear his name called until the sixth round, making him the 185th overall selection.

A driven, motivated student athlete, Chmelevski has shown resilience in overcoming past challenges including a mid-season trade further from his home in Northville, Mich. to the Ottawa 67’s that saw now-Philadelphia Flyers forward Travis Konecny go back the other way to Sarnia. After just five games in barber poles, Chmelevski’s season came to abrupt end after he suffered a broken collarbone in a game against the Peterborough Petes.

Come September 2016, Chmelevski was back in top form, returning to the Ottawa lineup to produce 21 goals, 22 assists and 43 points in 58 contests while also going 55% in the faceoff circle, an underrated trait for a player that has demonstrated the versatility to play both centre and the wing in his young career.

With conquered obstacles like the one he overcame as a rookie in mind, it’s no surprise that draft position isn’t something that’s about to stand in Chmelevski’s way as he moves forward with his OHL career in Ottawa this coming season.

“I think the draft is just a number,” he told Andrew Turner of the Los Angeles Times. “Obviously it’s exciting when you hear your name called. For me, I think I just use it as added fuel to the fire with all the people that were called ahead of me. I just use it as motivation to make me a better hockey player each and every day.”

Sharks general manager Doug Wilson, a 67’s grad himself (1974-77) who has gone through Ottawa on draft day several times in the past with the selections of Derek Joslin (2005), Jamie McGinn (2006) and Logan Couture (2007), traded up to acquire the 185th overall pick. The Sharks dealt two seventh-round picks to the New Jersey Devils to select Chmelevski, a pick that will be watched with intrigue by many in the hockey community in the years to come.

“It’s gut-wrenching, but it’s all part of the fun,” Chmelevski said after the big announcement. “You can’t really describe it. When you put the jersey on you think everything you’ve done the last 15 years of your life and how you’ve put everything aside just to get drafted.

“I wasn’t sure where I was going to go, but for the Sharks to trade up for me, a team that believes in me, it means a lot and I’m happy.”

Chmelevski’s on-ice talents are fairly well known, witnessed by the masses on national television during the 2017 Sherwin-Williams CHL/NHL Top Prospects Game in Quebec City where he put up a nifty first period goal for Team Orr.

What’s intriguing about Chmelevski though, is that he might be even more talented away from the rink.

The recipient of the Bobby Smith Trophy awarded to the OHL Scholastic Player of the Year in addition to the Canadian Hockey League’s Scholastic Player of the Year, Chmelevski recorded masterful results in his studies with a 98% average across six Grade 12 courses through Michigan’s Virtual Charter Academy. He becomes the first American to earn the distinction since present day Los Angeles Kings forward Dustin Brown, then of the Guelph Storm, did so in three consecutive years from 2000-03.

Chmelevski’s areas of study included a wide range of subjects such as British Literature, Sports and Entertainment Marketing, Anatomy and Physiology, Probability and Statistics, Psychology and Physical Education.

“It’s not often that you can pursue such a high level education and also play junior hockey,” said Chmelevski after receiving the Bobby Smith Trophy at the Hockey Hall of Fame. “I couldn’t do it without my academic advisor Eileen Duffin. She’s very important to us in Ottawa and continues to be throughout our careers.

“My education is very important to me and I’m glad I’ve been able to focus so much on both.”

#OHL Scholastic Player of the Year @sashachmelevski of @Ottawa67sHockey was awarded the Bobby Smith Trophy.

With André Tourigny taking over duties behind the bench and James Boyd taking over as the club’s general manager, the 67’s will lean on the skilled, studious Chmelevski for stability out of the gate this season as they take on a new approach.