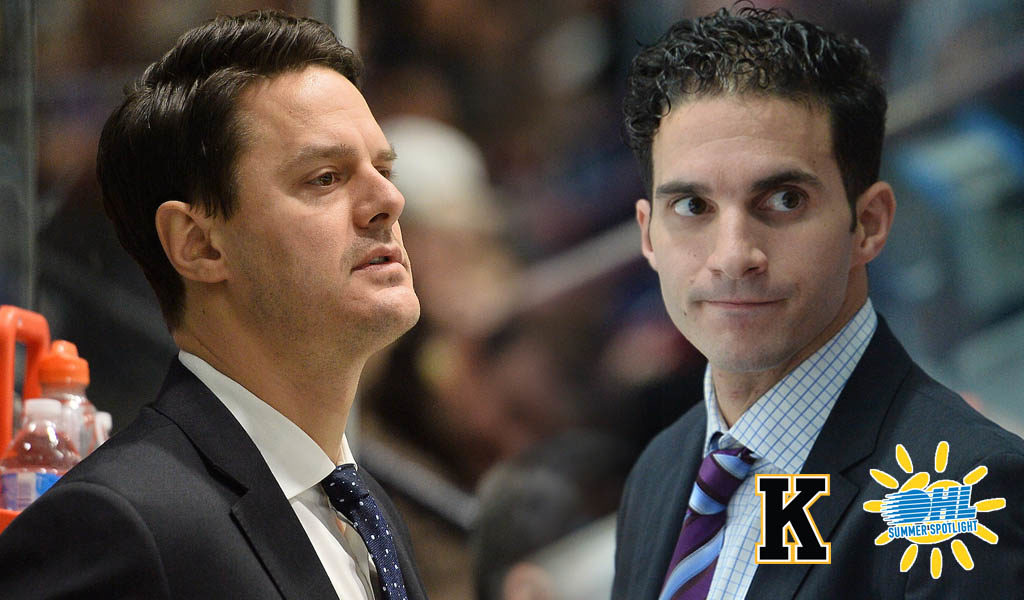 A veteran Kingston Frontenacs team with midseason additions in Gabe Vilardi, Sean Day, Cliff Pu and Max Jones made a playoff push last spring, reaching the Eastern Conference Final for the first time since 1993. The Fronts came up short against the eventual OHL Champion Hamilton Bulldogs though and now, with those aforementioned names along with veterans in star goaltender Jeremy Helvig, captain Ted Nichol and high-scoring Finn Linus Nyman moving on, the franchise faces somewhat of a rebuild.

One-year head coach Jay Varady has followed in the footsteps of Paul McFarland before him, joining the pro ranks as he’ll lead the AHL’s Tucson Roadrunners in 2018-19.

With a coaching vacancy, the Fronts stayed within the organization, promoting assistant Kurtis Foster to the lead role while also bringing in fellow OHL graduate Luca Caputi who has spent the past three seasons as an assistant with the Guelph Storm.

NEWS: // We are proud to announce that Kurtis Foster has been promoted to Head Coach. Luca Caputi has been hired as an Associate Coach.

Foster steps into the spotlight following one season as an assistant in Peterborough and one as Varady’s right-hand man in Kingston combined with the experience of a lengthy NHL playing career consisting of over 400 games and additional time spent in Europe.

“Three years ago, I would have told you I wouldn’t expect to be in this position but I love the game and want to be around it and I’m pretty honoured to get this opportunity,” he told Mike Davies of the Peterborough Examiner.

“My first two years I was pretty lucky. I walked into my first year in Peterborough to a very strong team. Last year, moving to Kingston, we surprised early and put ourselves in a position to make some trades to go for it.

“They were two great years to give me examples of what it’s like to be in a winning culture which is what I want to bring to Kingston and keep it going.”

The 36-year-old Foster won’t be going it alone with a young Frontenacs squad this season as newly hired associate coach Luca Caputi brings the experience of a highly successful OHL playing career along with a stint in the National Hockey League from 2008-11.

“Kurtis and I are looking forward to making sure our team has the habits that we believe in and the core values to be successful,” he explained to Global News’ Doug Jeffries. “We’re both young and driven guys who believe we have to be the hardest working coaches in the league if we want results.”

While several of Kingston’s big names have moved on, Foster, Caputi and assistant Phil Mangan will have some resources at their fingertips in high-scoring Dallas Stars prospect Jason Robertson who is the first Frontenac in 17 years to register back-to-back 40-goal seasons. Nineteen year-old centreman Brett Neumann brings speed down the middle while blueliners Eemeli Rasanen, Jacob Paquette and Jakob Brahaney have proven to be dependable against talented opponents.

Like any young team, the Frontenacs are sure to have their learning experiences in the opening half of the upcoming season, but Foster has overcome a lot in his lengthy career and hopes he can bring a fresh perspective.

“Whether it was breaking my leg and the adversity of coming back. Whether it was getting traded multiple times which I laugh about or getting released. Winning U18 or Deutchmaster championship in Germany. It puts me in a position where I can relate to players no matter what is going on,” he explained. “I should have an idea of how they are feeling and thinking on a day-to-day basis. When you have so many different personalities and characters you have to be able to relate to all the players.”

The Frontenacs have enjoyed some of their greatest success over the course of the past five years, setting a new mark with 97 points in 2016-17 while fans have witnessed the development of talented contributors in Sam Bennett, Lawson Crouse, Spencer Watson, Warren Foegele and Jeremy Helvig.

With young visionaries Foster and Caputi at the helm along with GM Darren Keily, the Frontenacs embark on a new chapter of OHL hockey in the Limestone City as they look to maintain a competitive presence in the Eastern Conference while developing talent for the years to ahead.