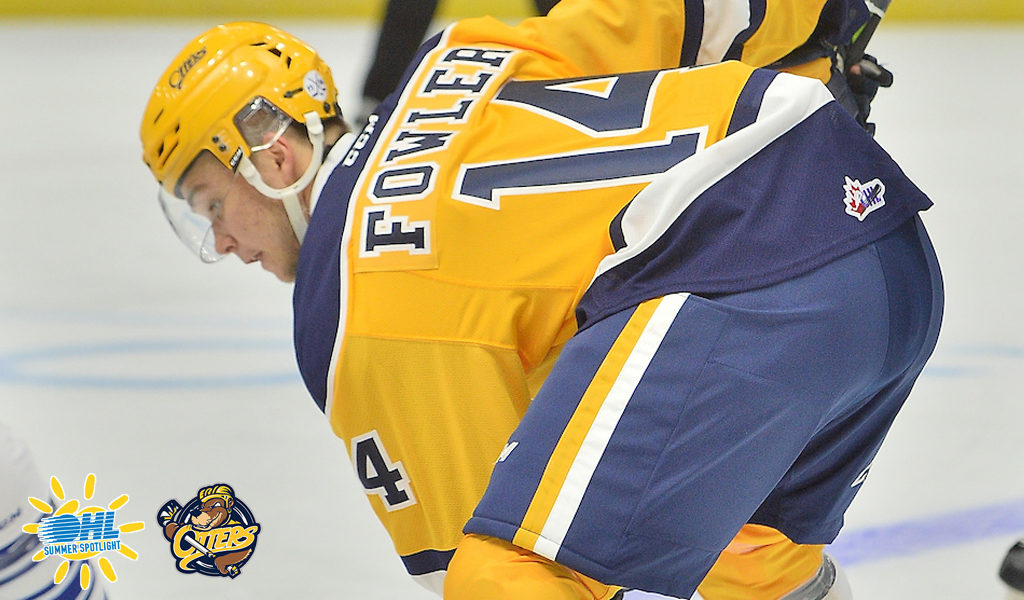 Returning to Erie in the best shape of his life and ready to conquer his second OHL season, things never quite lined up for Hayden Fowler in 2018-19.

The 17-year-old got off to a slow start before a large portion of his season was derailed due to a fractured clavicle suffered on November 14th in a game against the Kitchener Rangers. The former first round OHL Draft pick worked hard throughout the season to get back to full strength though, and made his return to the Otters lineup on March 7th as he collected five points (3-2–5) over his first three games back in action.

Now, after a summer of training alongside other familiar Kingston-based OHL names in Aaron Luchuk, Gabriel Vilardi and Nolan Hutcheson, Fowler is ready to take a run at his biggest season yet. Fortunately for him, his September 24th birthday is nine days beyond the NHL’s Draft eligibility cut-off date of September 15th, making him eligible for next summer’s proceedings in Montreal, QC.

WATCH THIS: @FowlerHayden2 the hero 🚨🚨@ErieOtters rookie ties the game with 8️⃣ seconds left in regulation then wins it 3️⃣9️⃣ seconds into OT. pic.twitter.com/CMdoI1lFO7

“That was basically the only silver lining from last season,” Fowler reflected. “At least it didn’t happen in my draft year.

“It was a big setback, but I’m excited for a new season and another chance to make an impact.”

The 19th overall pick of the 2017 OHL Priority Selection, the Otters coveted Fowler to the point of requiring him as part of the return in exchange for former star winger Taylor Raddysh at the 2018 OHL trade deadline. Now the Otters are hoping that investment for the future will pay considerable dividends two years later.

“Hayden is a kid that is ultra-competitive,” said Otters head coach Chris Hartsburg. “He’s shown that he can make plays and that he can score. The injury really affected his season last year but we’ve had some good conversations over the summer and he’s taken every step of his recovery and development very seriously.

“We’ve got a lot to be optimistic about in Erie,” Hartsburg continued. “Like a lot of our other young forwards, I think Hayden is tired of being part of an average team. We want to be taking the next step this year.”

What they lack in current star power, the Otters certainly make up for in depth and offensive options. Two seasons removed from an OHL championship and a trip to the Memorial Cup Final, general manager Dave Brown and his staff have replaced franchise cornerstones in Strome, DeBrincat and Raddysh with emerging names such as Fowler, Chad Yetman, Maxim Golod, Emmett Sproule and one of the OHL’s best and brightest young defencemen in Jamie Drysdale.

A team that nobody was picking to win the Midwest Division last season, the Otters finished four points out of the Western Conference playoff picture but proved to be a scrappy bunch, playing to a 17-5-3-1 record in one-goal games while posting a combined record of 14-4 in overtime and shootout scenarios.

“We’ve got a really tight group in Erie,” said Fowler. “Everybody gets along, and we seem to be able to mix and match with our line combinations without throwing things off too much. We all seem to be able to play together fairly well and I think that’s a good thing to have on a team.”

Fowler credited Hartsburg and assistants B.J. Adams and Wes Wolfe for their communication and approachability with a maturing team last season.

“It’s definitely an open door policy there and our coaches are always available. Chris (Hartsburg) is a coach that connects with us both on a personal and player’s level, so I think that helps all of us as we try and reach our potential.”

Having missed out on the OHL Playoffs in back-to-back seasons, the Otters are definitely due to make some noise in the Midwest Division. With a large contingent of 19-year-old players back in their lineup, they aren’t considered a ‘young group’ any longer, and they’ll need players like Fowler to be at the centre of their success.

“I know this is a big season for me personally, but it’s about more than that too,” he said. “You want to play for your teammates, and you want to play for the fans who deserve to see some winning hockey in Erie again. We played in a lot of close games last season and now we want to build off that competitiveness and be there ready to go at playoff time.”