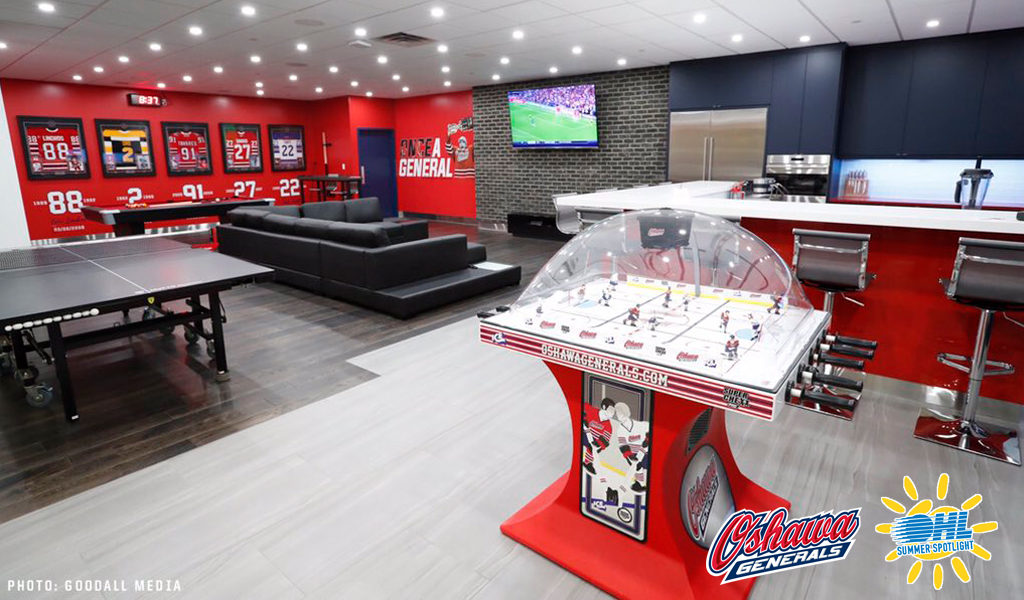 There’s a new look in Oshawa, and players are loving it.

The ribbon cutting ceremony gave way to a walkthrough of an expanded workout gym, new therapy area, improved medical room and most impressive of all, a brand new players lounge fitted with a pool table, ping pong area, big screen television, kitchen and much more.

“It’s pretty unbelievable,” said returning overage forward Brett Neumann. “I think I speak for all of the guys when I say I’m excited to spend time at the rink. The pictures don’t do it justice, you have to be there and check it out, it’s just phenomenal.”

Needless to say, Tullio and the Generals raised the bar on this one, giving a team that has reached the Conference Final in three of the past six seasons even more incentive to go out and succeed.

“It just shows how much the ownership and management cares about the players here,” Neumann continued. “They already do a lot for us. They treat us like family and it definitely motivates you to go out there and do the best you can.

“We’ve got all these resources available to us and it’s awesome.”

Fitting for a franchise with such high profile alumni as Bobby Orr, Eric Lindros and John Tavares, the Generals ensured that past greats would have a presence in the new layout. Retired jersey numbers accompanied by a framed uniform and signature are prominently displayed along the far wall of the players lounge, reminding the young men that they stand on the shoulders of giants.

Brand new facilities to provide the highest quality of care for our players! pic.twitter.com/K7MyCdVf8S

“Some of the best players to ever play the game came through Oshawa,” said vice-president and general manager Roger Hunt. “We wanted to recognize our rich past in a very modern way and always remember that the guys who have been Generals in the past are never far away from us here.”

That certainly rings true of recent alumni on Twitter. Philadelphia Flyers centreman Scott Laughton and a quartet of 2015 Memorial Cup champions in Dakota Mermis, Michael McCarron, Stephen Desrocher and Jeremy Brodeur all chimed in, expressing their amazement with the renovations.

“I think one of the biggest things I take away from an announcement like this is just how many players that have been through here in the past thought they had something spectacular during their time as a General,” added Hunt. “You hear guys almost react as if they didn’t think it could get any better and then we continue to try and raise the bar even higher.

“We want to give our players every resource we can to better enable them to fulfill their potential as student athletes.”

As for Tullio, who has owned the franchise since the start of the 2008-09 season, the completion of the project leaves him with a sense of accomplishment.

“It feels great,” he said. “It’s been a dream of mine for 12 years and to get everything to come together finally is a proud moment. I’m happy for our kids, for our franchise and obviously for our fans.”