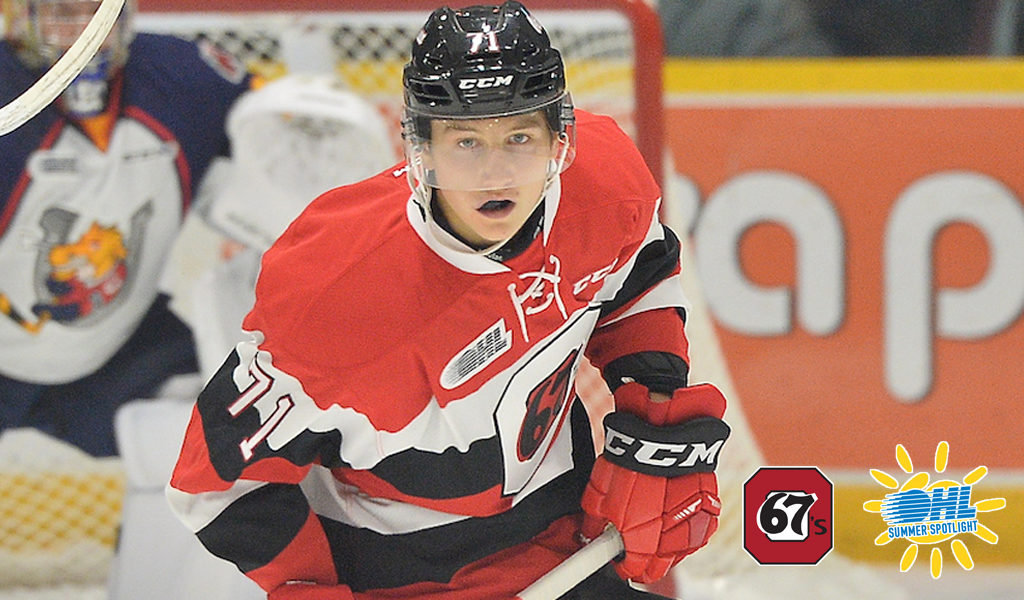 Kody Clark knows he’s benefitted from learning under the best teacher a boy could have, but none of that makes a difference if he isn’t willing to put in the work.

The son of Toronto Maple Leafs all-time fan favourite and fierce competitor Wendel Clark, Kody, who unlike his father, shoots right-handed, returns for his third OHL season with the Ottawa 67’s fresh off being selected by the Washington Capitals in the second round (47th overall). He’s the first Caps pick out of the OHL since the club took Plymouth’s Tom Wilson in the first round in 2012.

The 18-year-old Toronto native put up 39 points (18-21–39) in 56 games last season and drew the attention of NHL clubs with his intriguing blend of skating, tenacity and demonstrated willingness to play physically in the corners and along the boards.

https://t.co/kYf12OMDmp asked 2018 Capitals Draft Pick @kody_clark99 to keep a running diary from his time in Washington, D.C. during 2018 #CapsDevCamp. Learn what it’s like to be a Capitals Prospect! #ALLCAPShttps://t.co/f1cu6ik7py

Clark credits 67’s head coach Andre Tourigny for the big gains he made as a sophomore, helping him through the peaks and valleys of a 68-game season.

“He’s the best coach I’ve ever had,” he said of Tourigny, who recently led Canada’s Under-18 team to gold at the Hlinka Gretzky Cup in Edmonton. “He understands what the players think and he makes it pretty clear what he expects from us.

“He’s definitely the hardest worker on our team,” he continued. “When he expects a lot from us it’s not like we can be sour, because we all know he’s working just as hard we are.”

Admittedly privileged to grow up around the game, Clark, who has two older sisters who attend Western University in London, carries many unforgettable childhood memories with him from time spent at the rink. He cites names such as Dion Phaneuf, Matt Stajan and Mats Sundin as players who were particularly inspiring to him growing up, and always enjoyed going to Leafs practices where he could watch Phil Kessel score on nearly every shot he took.

“I really didn’t know it any other way,” Clark described. “For the longest time I just thought it was how all kids grew up, but as I got older I realized that wasn’t the case.

“I’m grateful for those years. They instilled in me a love for the game and being able to see my dad go to the rink every day and work hard is a pattern that has stuck with me.”

Now a part of the Stanley Cup champion Washington Capitals organization, Clark has soaked up playing in the OHL’s only NHL city and takes advantage of his billet family’s Senators season tickets along with roommate Noel Hoefenmayer.

67’s and Senators players often bump in to each other when out for dinner at the Wellington Diner downtown, keeping the NHL dream fresh for Clark.

“I know I’ve got to keep working to get there,” he said, “but going to Caps Development Camp was a real neat experience. There weren’t any other OHL players there, so it was a great opportunity to get to know guys playing in different leagues and at different levels.”

Clark keeps in touch with his dad, talking roughly three times a week. He’s determined to be a bigger factor offensively for an up-and-coming 67’s club this season.

“I’m not looking for a specific number of points,” he said. “I’m bigger, stronger and older than some of the guys in the league now, so if I’m doing the right things the points should come. I want to be accountable to my coaches and teammates in any situation I get put into.”

From the coaches perspective, Clark is seen as a guy just scratching the surface of his capabilities.

“He’s very fast and his confidence level increased during last season,” said Tourigny. “I still think this is just the beginning for him.

“He’s a really passionate kid, the first guy on the ice and the last guy off and this season we’re going to see more of what he can do.”