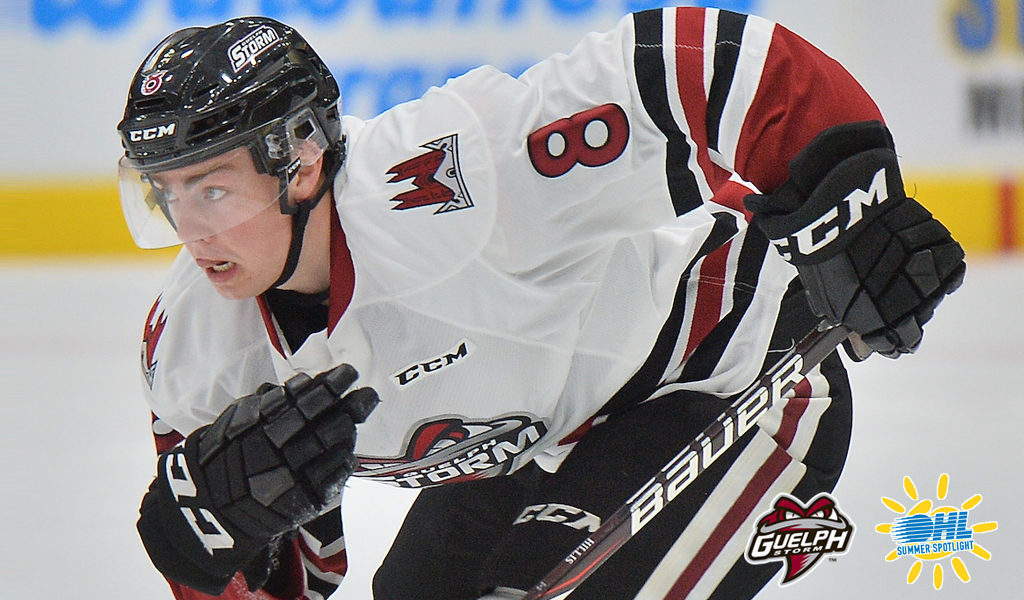 The Guelph Storm tight-roped their way to an OHL Championship last spring, and Cam Hillis sat and watched almost every minute of it.

The Montreal Canadiens third round pick would have undoubtedly helped the Storm a great deal in their tense journey through the OHL Playoffs that required 24 games, one shy of a league record. The injury bug got the better of Hillis though, as he was limited to 33 regular season games and a brief two-game playoff showing that was quickly derailed.

Having invested countless hours in the gym building himself back up physically, Hillis finally feels ready to go as he returns to Guelph to captain the Storm in his third OHL season.

No one deserves it more. One of the hardest and most dedicated players I’ve gotten the chance to play with. Definitely a born leader & I couldn’t be more proud to pass the torch to little Beaner! #guelphforever https://t.co/gZjZDRkc9U

“It was a strange year,” said the 19-year-old. “It’s hard to explain the excitement of winning a championship, but at the same time I can’t sit here and tell you it was a great year for me. It came with a lot of frustration and I’ve worked hard to put myself in a position to move forward and be ready to go for the season.”

Hillis’ trouble started on December 15th when he suffered a torn MCL in a game against the Mississauga Steelheads. After missing seven weeks recovering from that setback, he returned on February 1st only to break his collarbone a week later. Nearly two months later, after significant rest and rehab, Hillis returned to the lineup for Game 1 of Guelph’s second round series against the London Knights on April 5th only to re-aggravate the injury a game later.

That would be it for Hillis’ season. He had no choice but to sit and watch his Storm fall behind 2-0 in three straight playoff series, only to recover each time to eventually hoist the J. Ross Robertson Cup for the fourth time in franchise history.

“I really tried to just focus on controlling the things I can control,” he said of the situation. “Things like being a good teammate, supporting the guys and just being available, it was all I could really do at the time.”

Merci @CanadiensMTL for believing in me #Habs pic.twitter.com/7cyjcClP1w

Hillis’ positive attitude through last year’s trials clearly made an impression on teammates both young and old. He was named the 29th captain in Storm franchise history on June 25th.

“Cam is the natural choice to lead our program moving forward,” said Storm head coach and general manager George Burnett at the time of the announcement. “Despite all the adversity he faced, enduring and rehabbing from three major injuries during the past season, Cam contributed significantly to our leadership group and provided tremendous inspiration to our team throughout the season and playoff run.”

A fluid skater who plays the game with an edge despite his 163Ib. frame, Hillis has spent extensive time with Montreal Canadiens sports psychologist Dr. David Scott as well as past teacher and Mental Performance Consultant Luke Madill at St. Andrew’s College on his road to recovery.

When he’s been healthy, Hillis has been a consistent producer for the Storm. The Enniskillen, Ont. native has put up 30 goals and 81 points over 93 regular season contests since being a second round pick by the club in the 2016 OHL Priority Selection.

The former OHL Cup champion is viewing the 2019-20 season as a fresh start as he takes the lead on a young team.

Focus and strength for the finish 💪@CanadiensMTL prospect @cam_hillis shakes a check for his second of 2️⃣🚨 in @Storm_City outburst off a pretty nice feed from captain @isaacratcliffe for Sunday’s #BestOfOHL 🎥 pic.twitter.com/XsH3wKiVOc

“It’s a new opportunity and whatever happened with me individually last year is in the past,” he said. “I had the benefit of learning from a pair of great captains in Garrett McFadden and Isaac Ratcliffe and now I’m ready to help our team compete every night.

“I’ve been counting down the days here,” he concluded. “Summer has flown by, which is great because I’m excited to get back to Guelph and get to work.”