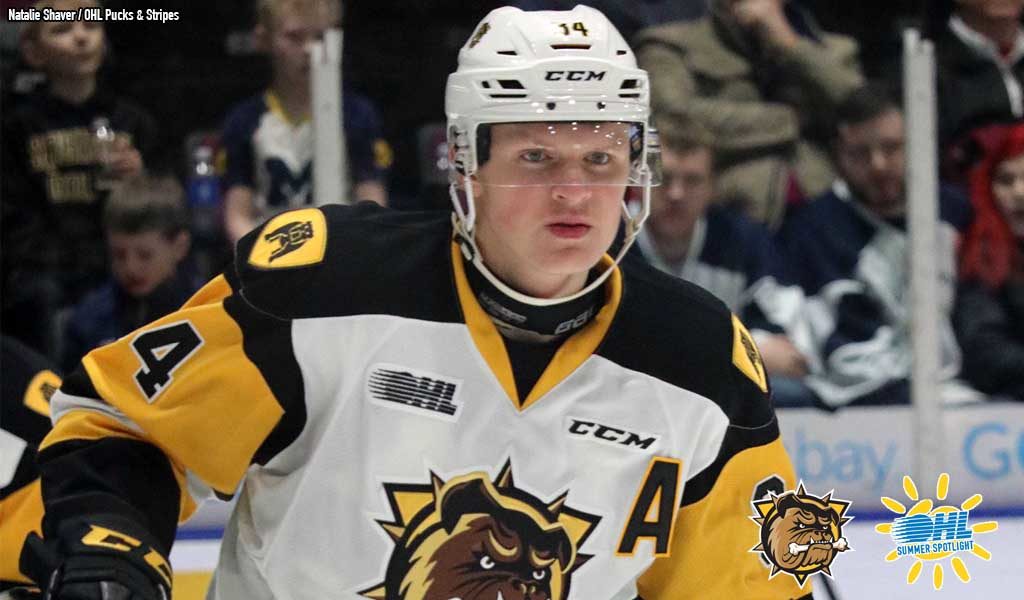 Arthur Kaliyev‘s two seasons in the Ontario Hockey League have been nothing short of outstanding.

The 18-year-old originally from Tashkent, Uzbekistan by way of Staten Island, NY has already won an OHL Championship and is one of just five players in league history to record a 50-goal season prior to his 18th birthday, joining good company in John Tavares, Steven Stamkos, Jeff Skinner and Alex DeBrincat.

Taking notice of these accomplishments, the Los Angeles Kings selected Kaliyev with the 33rd overall pick of the 2019 NHL Draft, just two spots outside of the first round.

Known for a big shot and quick release, Kaliyev looks to become the latest OHL-developed Kings competitor to put up big numbers in the NHL, following in the footsteps of former 30-goal scorers Tyler Toffoli and Jeff Carter.

“We’re excited, we’re so happy to have him on our team,” longtime NHL executive and Kings special adviser Mike O’Connell told NHL.com‘s Dan Greenspan. “He looks like he’s going to be a proven scorer no matter what level he plays at.”

Kaliyev proved this past season that he’s more than just a trigger man, teaming-up with linemate Matthew Strome to record 51 assists. He also finished second in OHL shots on goal behind London’s Kevin Hancock with 320.

The Kings hope Arthur Kaliyev, a forward they selected in the second round (No. 33) of the 2019 NHL Draft, will help reverse a trend of finishing outside the top 10 in the NHL in goals far more often than not.https://t.co/ZK3S8aTMuv

Entering his 18-year-old campaign, Kaliyev will aim to refine his two-way game in preparation for the rigours of the fast-paced NHL tempo. The Kings acknowledge he has some work to do on the defensive side of the puck.

“That’ll come,” O’Connell added. “That’s teachable. What he has, the offense that he has, that’s something that he has in him, and we can work on that, but the defensive part of the game, he’s going back to junior and he’ll get that.”

Kings director of amateur scouting Mark Yanetti echoes O’Connell’s optimism with regard to Kaliyev’s development, drawing a parallel between the big winger and the aforementioned Toffoli who once starred with the Ottawa 67’s.

“There’s enough hints from talking to people and from watching game film and watching his live stuff, seeing his body language and seeing some of the stuff he did away from the puck that give you the optimism and the ability to say I think this is the type of kid who gets it,” Yannetti told NHL.com‘s Adam Kimelman. “Tyler Toffoli didn’t compete that way as a 17-year-old. … Tyler Toffoli improved those areas of the game to put himself in position to win the Stanley Cup. We’re hopeful that in a similar way Arthur does that.”

#OHL talent to watch at #NHLDraft 👀@Arthur_Kaliyev of @BulldogsOHL is a prolific goal scorer with an impressive 82 tallies in just two seasons 🎥 pic.twitter.com/9rG2YRG094

Most recently, Kaliyev put forth an impressive showing at the U.S. National Junior Team’s World Junior Summer Showcase in Plymouth, Mich., recording four goals and an assist over five contests along with 22 shots on goal.

While a National Junior Team roster spot is certainly within reach, Kaliyev is also one to keep an eye on in this year’s OHL scoring race. He’s sure to have plenty of competition from the likes of fellow Kings prospect Akil Thomas (Niagara IceDogs), Riley Damiani (Kitchener Rangers), Serron Noel (Oshawa Generals) and top 2020 NHL Draft prospect Cole Perfetti (Saginaw Spirit) among others.

“I’m really proud to be with the Los Angeles Kings,” Kaliyev said on draft day. “It’s one thing to get drafted but now you have to go prove yourself and show people what you’re made of.”