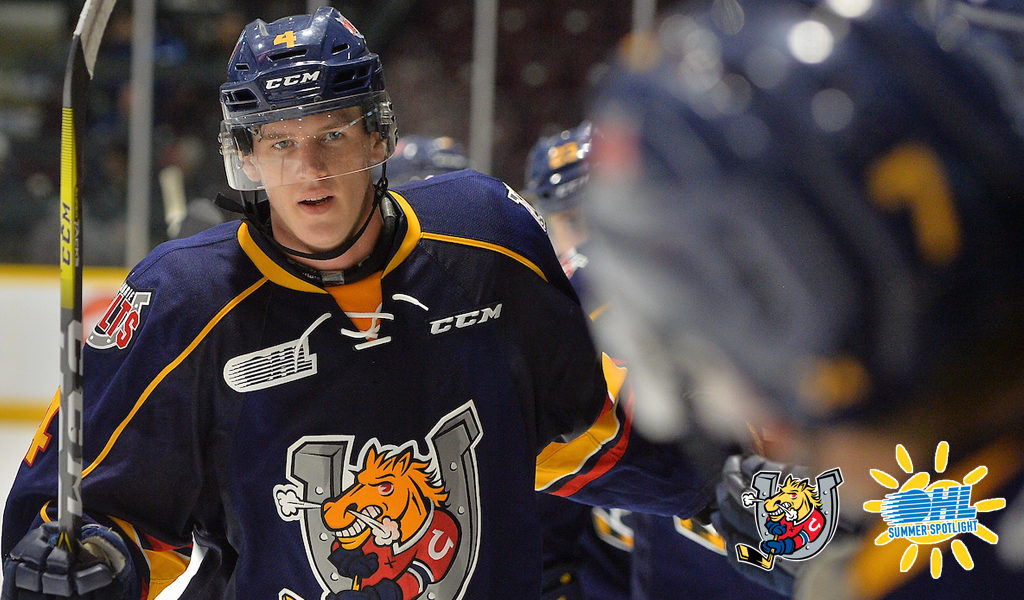 From posting one of the league’s worst plus/minus ratings among blueliners as a 17-year-old rookie to leading OHL rearguards with a plus-45 figure last season, Joey Keane turned a corner for the Barrie Colts and got himself noticed.

There are those who don’t place a whole lot of emphasis on plus/minus ratings, and the Central Division champion Colts did improve by 48 points last season, but there’s no denying Keane’s impact and contribution to that giant leap. His point totals jumped from 19 (1-18–19) as a rookie to 44 (12-32–44) last season as he was recognized as an OHL Third Team All-Star.

Keane missed out on the NHL Draft and returned to Barrie last season following a summer of hard work, an investment that paid big dividends in Dallas this past June when he was a third round pick of the New York Rangers.

“Any time you get to represent Team USA it’s an honor and a really cool thing. Facing guys from Canada and Sweden, it’s good to compare yourself to talent that’s out there.”#NYR prospect Joey Keane on repping 🇺🇸 at the World Junior Summer Showcase.
📰: https://t.co/fAHChRMATx pic.twitter.com/T1AelTeJqM

“I feel like the game really slowed down for me last season,” he said. “I grew, got stronger and continued to work on my skating throughout the offseason and I think I came back to Barrie with a new outlook on things. I was ready for the challenge.”

Keane hails from the Chicago suburb of Homer Glen, Ill., and helped the Dubuque Fighting Saints reach the USHL Final before coming to Barrie in 2016-17. Long-time Colts assistant coach Todd Miller oversees the club’s defensive operations and saw a noticeable improvement in Keane’s game across the board as a sophomore.

“Honestly, I think as a rookie he thought it was going to be an easier transition than it was,” Miller noted. “Joey is a very motivated and confident guy and he had to overcome some challenges in his first season, specifically on the defensive side of the puck.

“He came back to Barrie last summer and our coaching staff was frankly shocked at the improvement we saw throughout Training Camp and into the season,” he continued. “He put in a lot of hard work and the results were evident out on the ice. He was a go-to guy for us last year and the New York Rangers took notice of that as well.”

The second-oldest of four boys, Keane was raised in a first generation hockey family after his father grew up in Ireland. He’s been to the Emerald Isle roughly 10 times and grew up playing Irish sports such as Gaelic football and hurling, but says he and his brothers formed an early affinity for hockey.

“The beginnings were pretty simple,” he described. “I think somebody my dad worked with had his kids involved in hockey and dad decided to take us out for an open skate one day and we loved it. I eventually got to go to a lot of Hawks games and they ended up winning three Stanley Cups in six years which really inspired all of us I think.”

Keane’s younger brother Gerard was a third round pick of the London Knights this past spring, coming out of the Chicago Mission U16 program. The two have maintained a competitive relationship.

“We’re a few years apart but we push each other,” said Joey, three years Gerard’s senior. “I’ve tried to give him a hand this summer training-wise and skating together regularly. Growing up the coaches didn’t let us go against each other though,” he added with a laugh. “It’d always escalate into us fighting or taking things too far.”

That competitive edge paired with what Miller describes as a ‘next-level’ skating ability are what have propelled Keane into the spotlight in Barrie as he returns for his 19-year-old season as one of the OHL’s premier defencemen.

“Couldn’t have asked for a better spot than New York.” — 2018 #NYR draft pick Joey Keane talks about when he heard he’d be coming to New York and what type of defenseman he is at #NYRPDC. pic.twitter.com/NyJSyShc71

“He’s sort of like a Cam Fowler-type presence, a guy who has developed into the sort of player you can count on in any situation,” said Miller. “I personally haven’t coached too many guys who can skate as effortlessly as he does. He can get caught in a bad spot offensively and still manage to recover and you don’t see him get beat one-on-one very often.”

Keane attended Rangers Development Camp and represented the United States at the World Junior Summer Showcase last month in Kamloops, BC. He’ll return to the Big Apple for Training Camp in September but is excited about how Barrie’s blue line is shaping up for the coming season.

“Playing in Barrie has been a lot of fun and a great challenge,” he said. “I think we’ll have a really strong defensive group this season with another guy who got drafted Tyler Tucker (St. Louis), our captain Justin Murray, Nathan Allensen who had a really good rookie season and big Chris Cameron back in the lineup.

“After the tough season two years ago, it was a lot of fun to have the success we did last year and we want to build off that.” 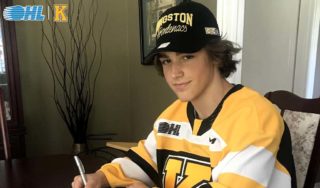