OHL 20 in 20 Summer Spotlight: Perfetti and Lennox shine on the world stage 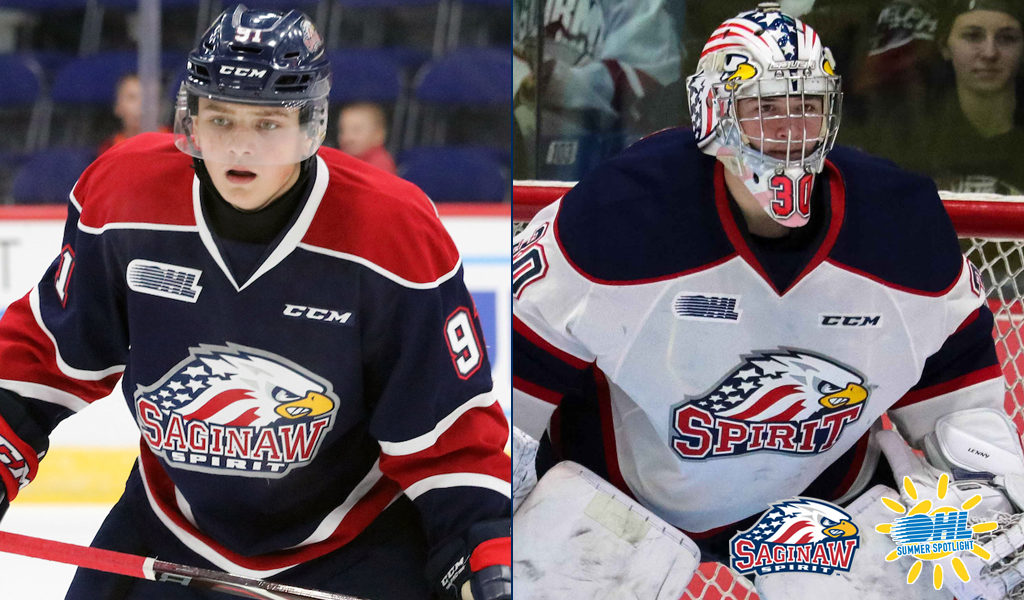 A pair of Saginaw Spirit soon-to-be sophomores recently showed the world what fans across the Ontario Hockey League have already come to realize – these kids are for real.

Cole Perfetti led the tournament with seven goals over five contests while goaltender Tristan Lennox also showed well, registering a 0.95 goals-against average and .951 save percentage over three appearances as both returned home from Breclav, Czech Republic with silver medals.

Perfetti’s phenomenal semi-final showing was the performance of the tournament as he scored twice in regulation before burying a shootout hat-trick to lead Canada into the gold medal game with a 3-2 win over Sweden. Lennox turned aside six of the eight shots he faced in the shootout to backstop Canada to victory.

“We both had a great time over there,” said Perfetti of the experience. “It was awesome to represent Canada and play the way we did. Unfortunately we came up a little bit short, but we’re proud of what we accomplished and I know Tristan and I can both bring a lot of positives back to Saginaw.”

Perfetti’s semi-final outing is one he won’t soon forget.

“It’s probably the best hockey experience of my life,” he said with a laugh. “Everything was kind of going my way and it was cool to be able to do that on national television in front of the whole country. The support I got from back home was tremendous and it’s the kind of thing you dream of.”

Goal** PERFECT-ti at it again! @ColePerfetti91 coming in clutch, having now scored in every game for 🇨🇦.pic.twitter.com/fk3bXtoner

The Whitby, Ont. native etched his name into the Spirit franchise record book this past season, setting a new rookie mark with 37 goals to go with 37 assists for 74 points. He also had a great showing as a member of Team Canada White at the 2018 World Under-17 Hockey Challenge, recording nine points (2-7–9) over five games in Saint John, New Brunswick.

As for Lennox, the 16-year-old from Cambridge, Ont. was put to the test this past spring when Spirit starting goaltender Ivan Prosvetov was issued a five-game suspension for actions in Game 2 of the Rogers OHL Championship Series, forcing Lennox into action the rest of the way. The Spirit fell to the eventual champion Guelph Storm in seven games, but Lennox gave his team a chance to win, posting a 3.11 goals-against average and .911 save percentage over seven playoff appearances.

“Yeah, when Chris (Lazary) looked down the bench at me and told me to go it was a bit of a crazy feeling, but the nerves went away pretty quick,” he recalled. “It was a good experience, one I’m glad I got to have and I just tried to make the most of it.”

Unlike Perfetti, who is considered a top prospect for next summer’s NHL Draft, Lennox won’t be eligible until 2021 as a result of the October 21st birthday that made him one of the youngest players in the league this past season.

Tristan Lennox slammed the door and Cole Perfetti scored twice as the @SpiritHockey duo led @HC_Men 🇨🇦 to a tournament-opening 6-0 win over Finland 🇫🇮 at the #HlinkaGretzkyCup.

With the pressures of NHL Draft surveillance off his shoulders for now, Lennox will return to Saginaw to face a heavier workload after Prosvetov signed an entry level contract with the Arizona Coyotes in July.

“Things in Saginaw have been awesome,” said Lennox. “I can’t really put into words how thankful I am to the coaches and all of the staff for how well we’re treated there. I’m looking forward to going back and taking on a bigger role next season.

“I think we’re going to be a competitive team once again.”

Coming off their first West Division title since 2011 and the franchise’s first-ever Western Conference Championship Series appearance, things appear to be trending in the right direction for the Spirit as GM Dave Drinkill has managed to lock down significant commitments from high profile names like Perfetti, Bode Wilde and Blade Jenkins in recent years.

Hard-working captain Damien Giroux will return to the lineup this fall along with a pair of new NHL prospects in draft selections Mason Millman (Philadelphia) and Nicholas Porco (Dallas).

“We were so close last year, just one game away from going to the Finals,” said Perfetti. “We were a hell of a team and we were right there. We have a lot of guys coming back, a good core group of guys and we know what it takes to win now.

“This year is going to be fun.”