OHL 20 in 20 Summer Spotlight: Petes hit the road to start the season 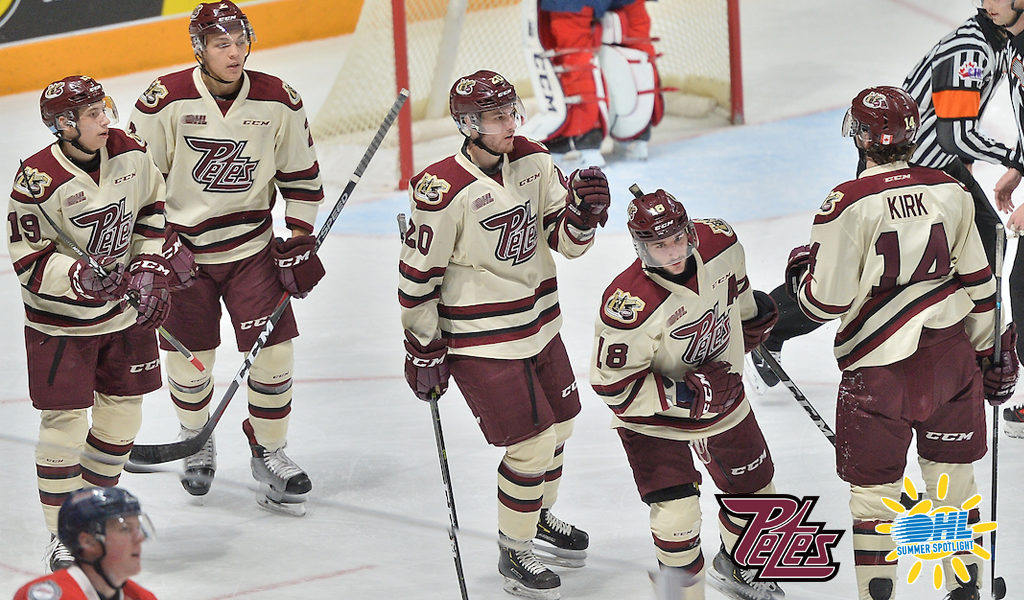 Peterborough Petes fans will have to wait a fair bit longer than the rest of the league to see their home squad in action this fall.

Repairs to the floor of the Peterborough Memorial Centre are pushing the club’s home opener back to Thursday October 17th against the Hamilton Bulldogs, a contest that will follow nine straight out of the gate on the road.

The men in maroon will play 11 of their first 12 contests away from home to open the 2019-20 campaign, giving the promising group an uphill climb to begin the schedule.

.@PetesOHLhockey home opener for the 2019-2020 is Oct. 17 due to floor renovations at the @PtboMemCentre meaning a month of road games to start the season. @CityPtbo says it worked diligently to shorten the construction schedule to 19 weeks for an earlier than planned completion. pic.twitter.com/sutx65Rzgq

“There’s a lengthy timeframe for this type of repair and the job didn’t get started until late spring, which ultimately meant that the facility wouldn’t be available to us for training camp and the first few weeks of the regular season,” said Petes general manger Mike Oke, a lifelong Peterborough native. “The City has been very accommodating in ensuring that we have the space we need to deliver a quality experience to our prospects and players.”

There is a silver lining to all this. In addition to the floor, the boards, glass, bench and penalty box areas will all be getting an overhaul, leaving the notorious ‘square corners’ at the PMC intact to begin the new season.

The Petes will hold training camp and early season practices at the Evinrude Centre located just a 1.5km jaunt west on Lansdowne off Monaghan Road.

Their first three weeks of the season include road trips to London and Windsor, North Bay, Sudbury and Sault Ste. Marie as well as Saginaw, Sarnia and Flint.

“Every season you’re going to look at the schedule and weigh out the pros and cons,” said Oke. “In our case we could view starting on the road the way we are as a big negative, but we’re going to try and look at it as giving our group the chance to get some of those long trips out of the way early. It’s an opportunity for our guys to grow closer together and know one another right off the bat.

“As we move deeper into the season we’ll have the opportunity to play some of those key games toward the end in front of our home crowd with minimal travel.”

The time is now for the next step in @ryan_merkley‘s NHL career. https://t.co/qDiHofZIAI

An East Division title in 2017 gave way to a disappointing season in 2018 as the Petes missed out on the OHL Playoffs. Peterborough rebounded this past season though, playing to a 33-31-2-2 mark while producing a pair of second round NHL Draft picks in forward Nick Robertson (Toronto) and goaltender Hunter Jones (Minnesota).

With one of the league’s top goaltenders in Jones and a returning core that includes Robertson, fellow Leafs prospect Semyon Der-Arguchintsev, Arizona Coyotes draftee and British fan favourite Liam Kirk, draft eligible sophomore Cameron Butler and blue line standouts Ryan Merkley and Declan Chisholm back in the fold, expectations are a little higher in Peterborough entering the season.

“We think we’ve got a nice group of returning players to blend with a solid rookie class,” said Oke. “Having three players at the World Junior Summer Showcase (Robertson, Chisholm, Jones) as well as our two first round picks at the World Under-17 Development Camp (Mason McTavish, J.R. Avon) is a great way for those guys to prepare for a new season and come into camp with confidence.”

Maple Leafs forward prospect Nicholas Robertson met coach Mike Babcock long before Toronto selected him in the second round (No. 53) of the 2019 NHL Draft. Read about it here.https://t.co/cxns89IuAs

Petes fans can make a short 20 minute drive southwest of town to see their team in Millbrook before the season begins as the Petes will take on the Niagara IceDogs in their final exhibition matchup on Saturday September 14th at 7:05pm. The game will be part of the opening festivities at Millbrook’s brand new community centre as the Petes give their fans out in Peterborough County a glimpse of what they can expect in 2019-20.

“It’s going to be a challenge,” said Oke of the early season schedule. “The players and the coaching staff are going to have the mindset that we’re up for the challenge and we’re going to meet it head on.”