OHL 20 in 20 Summer Spotlight: Robertson a shooting Star in Kingston 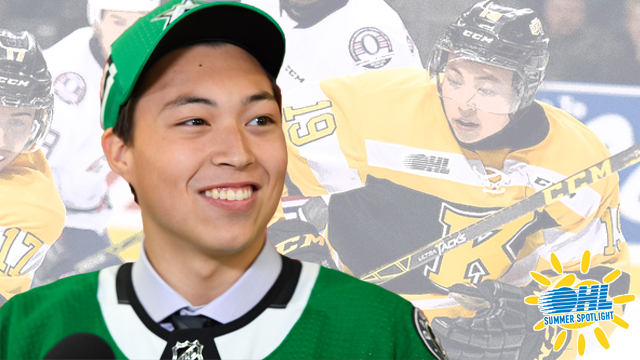 Sporting a grin fromt ear to ear, Jason Robertson looked like a kid on Christmas morning after learning he’d been chosen by the Dallas Stars in the second round of the 2017 NHL Draft just two months ago in Chicago.

The 6-foot-2, 196Ib. left-winger was an offensive force on a Kingston Frontenacs team that posted a franchise-low 179 goals for last season, finding the back of the net 42 times in 68 games, adding 39 assists for an 81-point output. He also led the league in game winning goals with 11 and joined Niagara’s Ryan Mantha and Erie’s Alex DeBrincat as one of three OHL players with over 300 shots on goal during the regular season.

With that kind of production as an OHL sophomore, the sky is the limit for Robertson in his return to the Limestone City this fall.

“I think I gained a lot of confidence in my game, in my skating and in my shot. Those things really helped me take off in the second half,” he reflected after learning of his new destination in Dallas.

“The right mindset has really kept me on cue,” he added. “My head coach Paul McFarland (now an assistant with the NHL’s Florida Panthers) and assistant coach Jason Supryka (now a pro scout with the Los Angeles Kings) were both big advocates for me and that helped a lot.”

“I always want to challenge myself to be put against the best players on the ice.” – Jason Robertson during @DallasStars Dev. Camp. #txstars pic.twitter.com/iDBduqCRY8

Like Ottawa’s Sasha Chmelevski who was recently documented in the OHL’s 20 in 20 Summer Spotlight Series, Robertson also has origins in California, taking family trips to the arena in an RV until he was 10-years-old before relocating to Northville, Michigan. Unlike Chmelevski who remained in the U.S. and was a first round pick of the Sarnia Sting in 2015, Robertson played his minor midget hockey with the GTHL’s Don Mills Flyers before being chosen in the fourth round by the Fronts.

“His shot is a real weapon,” said veteran centreman Ted Nichol who returns to Kingston as an overager this fall. “He has a great release on his wrist shot and he can really pick corners, especially on the power play.

“He’s a smart player, maybe not the quickest guy out there, but he knows where to be on the ice and anticipates well. He really puts himself in good scoring positions.”

Robertson’s line alongside Nichol and Finnish winger Linus Nyman was Kingston’s primary source of offence late last season, helping the Fronts oust the Hamilton Bulldogs in overtime of Game 7 in their first round series.

“In December, Paul (McFarland) brought us into the room and kind of laid things out for us,” Nichol continued. “My job has been to get him (Robertson) the puck. If I forecheck hard, battle in the corners and find ways to get pucks to him, there’s a good chance they’re going in the net.”

Robertson put his goal-scoring prowess on full display upon arriving in Kingston for his first OHL training camp in 2015. The then-16-year-old netted a hat-trick in one of his first scrimmages at the Rogers K-Rock Centre. In the two years since, Nichol and other Frontenacs teammates have seen the fresh-faced kid come of age.

“He’s definitely matured a lot and developed his game in such a way that he’s a real big part of our team,” Nichol noted. “I know he’s put in a lot of work, so it’s good to see him rewarded for all of that by getting drafted.”

Jason Robertson will look to build off of a breakthrough season that saw him score 42 goals, 6th in the OHL. https://t.co/jlOZdn0SHs

Fans in the OHL’s East Division will get to see plenty more Robertson-architected offence in the years to come. Jason’s younger brother Nick Robertson was a first round pick of the Peterborough Petes in the 2017 OHL Priority Selection after putting up 36 points (18-18–36) in 32 games with the Toronto Red Wings minor midgets last season.

“I normally dressed my littler brother up a as goalie and rip five-hole on him,” the older Robertson told Greg Wyshynski of Yahoo! Sports of their childhood adventures. “He just did his draft. I know two years from now, when he’s doing his NHL draft, I’ll be rooting for him. He and I have been really close in hockey.”

Robertson will have brotherly competition on the eight different occasions that the Fronts and Petes square off this season as he continues his development path towards being the next natural goal-scorer on the wing in the Big D.