OHL 20 in 20 Summer Spotlight: Russians ready to run with Colts 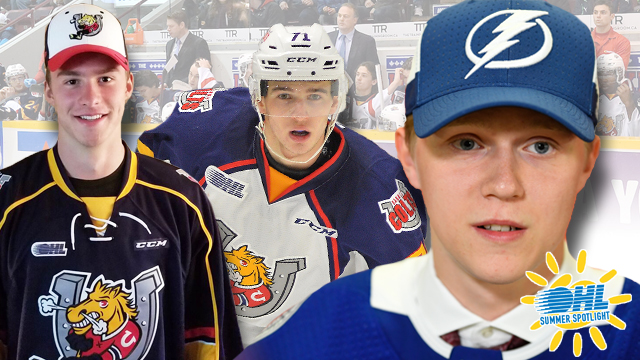 The days of Jan Bulis, Denis Shvidki and Alexandre Volchkov seem so long ago.

Once a regular landing spot for some of the Canadian Hockey League’s top European forwards, the Barrie Colts are looking east again, recruiting some of Russia’s top young goal-scoring talent.

The @OHLBarrieColts have landed a huge player in Andrei Svechnikov. https://t.co/X1irBIVXpQ

A prolific scorer in his day, Hockey Hall of Fame inductee and Colts head coach Dale Hawerchuk has played with a Russian player or two in his time and knows they love to play the possession game.

“If they’ve got the puck all the time, that’s pretty good defence,” he joked as he looked ahead to his new additions that will report to training camp before month’s end. “It will be interesting to see how camp goes and what kind of chemistry develops. It’s certainly not out of the question that two or all three could end up playing together if it’s the right fit.”

After reaching the Eastern Conference Final in 2015-16, the Colts suffered heavy losses through graduation and took a step back last season, playing to a 17-44-6-1 mark.

Hawerchuk has been here before. The Colts won just 15 games in his first season at the helm in 2010-11, missing the playoffs before selecting Aaron Ekblad with the first overall pick of the 2011 OHL Priority Selection.

Embarking on his eighth season in Barrie, Hawerchuk is optimistic about the young group general manager Jason Ford and his staff have assembled.

“It kind of reminds me of entering my second year after we went through a rough patch,” he noted. “We had good young players like (Mark) Scheifele and (Tanner) Pearson and then Ekblad came along and we added the pieces to help those guys. We ended up going on a pretty good run for five years and made it to the East Final twice, so hopefully this will be the start of something.”

Though they come from over 7,000 kilometres away, the three Russians have a past together. Nizhnikov and Svechnikov won bronze together with Russia’s National Under-16 team at the 2016 Youth Olympic Winter Games in Lillehammer, Norway where the latter finished tied for the tournament lead in scoring with 10 points (6-4–10) over four contests. Svechnikov and Lipanov joined forces for Russia, winning bronze at both the 2016 Ivan Hlinka Memorial Tournament and the 2016 World Under-19 Junior A Challenge in Bonnyville, Alberta. Nizhnikov and Lipanov have a playing connection from their youth growing up in Moscow.

“I’d love to play with both of them, they’re Russians,” said Nizhnikov, who scored 12 goals and added seven assists for 19 points in 43 games as a rookie. “I really hope that we can score more goals this year. It’s really good that we have such talented players joining the team.”

I’m very proud to be a part of the @TBLightning !!! #nhldraft2017#tblightning #bolts pic.twitter.com/V3ZaMq4zaY

Lipanov was chosen in the third round by the Tampa Bay Lightning this past summer after spending most of last season in Russia’s second-highest professional circuit, the VHL. He registered eight points (3-5–8) in 21 regular season contests before appearing in six playoff games as Dynamo Balashikha won a league championship. He also led Russia to bronze, wearing the ‘C’ at the IIHF World Under-18 Hockey Championship in Poprad, Slovakia.

Both one year younger, Svechnikov and Nizhnikov are entering their draft year, each garnering considerable attention from scouts.

Svechnikov is widely considered a first overall candidate ahead of next summer’s event in Dallas. The younger brother of Detroit Red Wings first round pick, former Cape Breton Screaming Eagles star and 2017 Calder Cup champion Evgeny Svechnikov, Andrei put up 29 goals, 29 assists and 58 points in 48 games as a rookie with the USHL’s Muskgeon Lumberjacks last season. He has excelled at the international level as well, earning a number of medals despite being just 17-years-old.

“There’ll be lots of scouts every night I’m sure,” said Hawerchuk of the season ahead. “We’re young, we’re skilled and we’ll be exciting.

“You have to live through some of the mistakes they make as young players, but that’s part of the process,” he added. “They quickly learn about those places that you really don’t want to turn pucks over and I think it takes a few games to realize that things happen a little quicker in this league.”

Nizhnikov went through that process last season, suffering a rash of injuries as he adjusted to facing bigger, stronger, more experienced opponents. The 6-foot-1, 190Ib. forward who admires NHL forwards Patrick Kane and Evgeni Malkin, who also happens to wear number 71, is eager to make progress on both the team and individual levels.

“I want us to make the playoffs and be a tough team to play against,” he said. “It’s a big year for me and Svechnikov with the NHL Draft coming up and it would be good to make big improvements this season.”

With first overall OHL Priority Selection choice Ryan Suzuki also joining Nizhnikov, Svechnikov and Lipanov in the Barrie lineup, the Colts are shaping up to be an exciting offensive club to keep tabs on out of the gate this season.