OHL 20 in 20 Summer Spotlight: Rymsha settles in with Sting 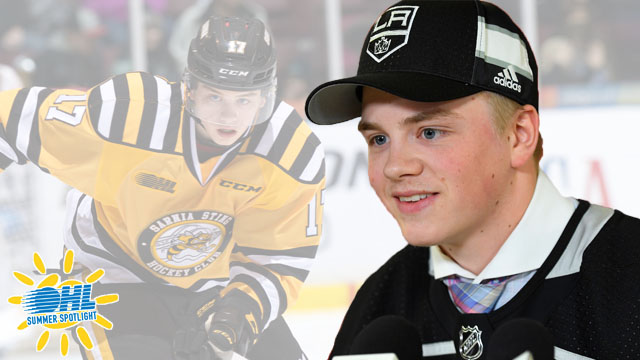 After suffering a broken leg in his draft year, Drake Rymsha made the most of a second chance.

Joining Gabriel Vilardi (Windsor Spitfires), Markus Phillips (Owen Sound Attack) and goaltender Matthew Villalta (Sault Ste. Marie Greyhounds) as one of four OHL players chosen by the Los Angeles Kings in the 2017 NHL Draft, Rymsha used a big second half with the Sarnia Sting to get noticed and be selected in the fifth round (138th overall).

The right-handed shooting centreman thrived under fellow Michigan native, OHL graduate and Stanley Cup champion Derian Hatcher at the helm as head coach in Sarnia, elevating his game following a mid-season trade from Ottawa that brought him closer to home.

Rymsha clicked with St. Louis Blues second round pick Jordan Kyrou, registering 20 goals, 13 assists and 33 points in 28 contests with Sarnia to close out the regular season.

“It was good to get a change of scenery and a fresh perspective on things,” Rymsha said of his experience. “Coach Hatcher placed a lot of confidence in me right from the start. He believed in me and let me go out there and use my skills, so I think that really helped me get off to a good start in Sarnia.”

Rymsha’s time in Ottawa came after he was a fifth round pick of the London Knights in the 2014 OHL Priority Selection, playing a total of 66 games in green and gold to begin his OHL career.

Exposure to different environments has worked to his benefit.

“I’ve played for three coaches who all know the game very well,” he said. “Dale Hunter, Jeff Brown and now Derian Hatcher are all former NHL players that have taught me different things. Playing with different teams and overcoming adversity like the broken leg I had in my second year have strengthened and matured me.

“It’s never enjoyable to get hurt like that,” he added, “but sometimes it’s good for your development to overcome adversity when you are a young player.”

A self-described two-way centreman who aspires to play like OHL graduates Bo Horvat (Vancouver Canucks/London Knights) and Boone Jenner (Columbus Blue Jackets/Oshawa Generals), Rymsha has proven to be sure-handed in the faceoff circle, winning 58% of his draws last season.

With a willingness to play hard in all three zones, the Los Angeles Kings took note, tabbing Rymsha with their final pick of the Draft.

“For me, this guy fills all the boxes of a later round pick,” Kings Director of Amateur Scouting Mark Yanetti told Gann Matsuda of frozenroyalty.net. “He’s got speed, a competitive element, and he’s dealt with adversity. As for secondary assets, 20 goals in 28 games—he was on pace for [considerably more]—and a high compete level. He’s got the combination of primary and secondary assets of later round draft picks who tend to make it.”

“It’s a small sample size at the end of the year, but it’s hard to ignore what he did, and it wasn’t a complete anomaly,” Yanetti added. “He was on pace for more than a very respectable number of goals, and even the year before, he showed secondary scoring ability. That’s the first thing that draws your attention.”

Rymsha’s aforementioned chemistry playing alongside Kyrou was a highlight of his season.

“He’s fast, smart and he does everything at a high pace, especially with the puck,” he said of Kyrou, whose 30-game point streak that spanned from January to mid-March was the longest in the OHL last season.

“The biggest thing is the excitement level he brings to the rink every day,” he added. “It rubs off on the team and makes everyone want to be better. When you have guys like that in the room it makes for a good environment.”

The Sting claimed the final playoff spot in the Western Conference last spring before an early exit at the hands of the eventual OHL champion Erie Otters.

“I’m a drafted fourth year guy now, so I have high expectations,” he said, thinking about the season ahead. “Overall we have a pretty young team, so it’s up to myself and a few of our veteran guys to lead us in the right direction both on and off the ice.

“That starts with having the right attitude right from the moment you arrive at the rink.”