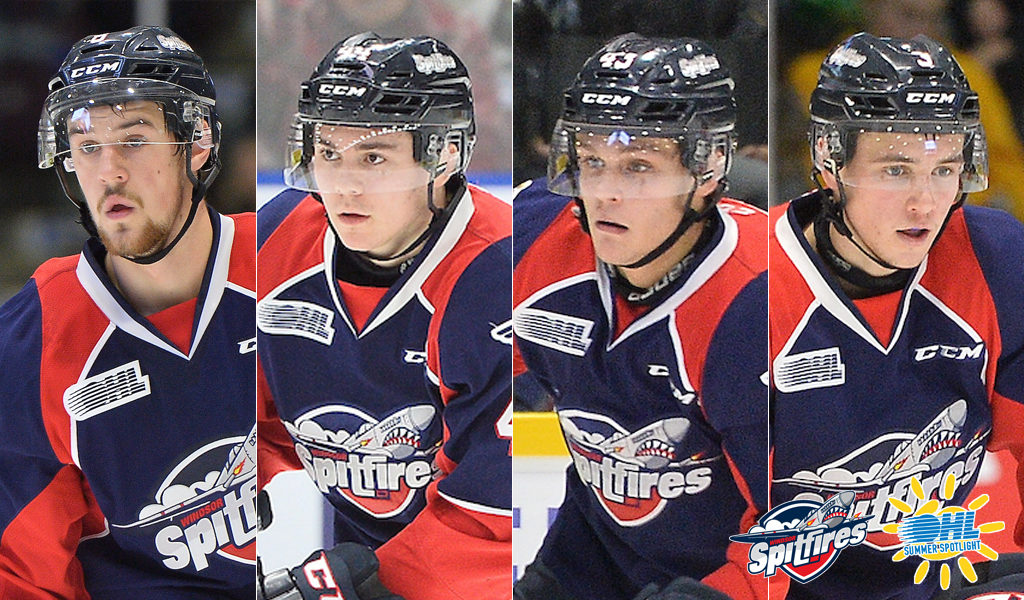 Two seasons removed from a thrilling Memorial Cup championship on home ice, the Windsor Spitfires are feeling as though they’re headed back in a competitive direction, one that could very well see the franchise win its first playoff round in eight years.

Much ink will be spilled in the coming weeks over Canadian Under-18 Team Hlinka Gretzky Cup participants Will Cuylle and Jean-Luc Foudy, two rising stars on the Spits’ offensive corps. While there’s a lot to like up front in Windsor when one considers the presence of Nashville Predators second round pick Egor Afanasyev, 6-foot-9 Dallas Stars prospect Curtis Douglas and newly added first round pick Wyatt Johnston, a largely unheralded group of defencemen appears ready to take the next step.

“We’re really excited about our group of defencemen,” said Spits head coach Trevor Letowski who is enjoying a few more days of summer in his hometown of Thunder Bay, Ont. “All of the guys back there played a lot and faced some tough opposition as young players in the league and they’re better defencemen today for having done so.

“We committed to them, we’ve always liked them and as all young defencemen they’ve had ups and downs but we trust them. We think the guys we have back there are going to be really solid players in the league this season.”

The 6-foot-2, 193Ib. Corcoran is the lone defensive holdover from the 2017 Memorial Cup championship team and drew high praise from Letowski for his commitment both on and off the ice.

Thank you @MapleLeafs for a great week at development camp! pic.twitter.com/lDKKnw7SFV

“Corks is a leader for us back there,” said the Spitfires head coach. “He’s an NHL drafted player that has developed really nicely for us. We think he’s going to be one of the premier defenders in the league next year.”

From there, the 2001-born trio of Staios, Ladd and Henault will be relied upon to step up and fill larger roles this season. Ladd, who was the highest-selected defenceman in the 2017 OHL Priority Selection, is up for the challenge.

“I had a bit of a tough season last year with injuries, but I’ve loved my time in the league with both Kitchener and Windsor,” he said. “When I came here me, Henault and Staios were all rookies and so we’ve kind of grown together through both success and failure. With all of us a year older and a couple new signings on the team we think we’re a group that other teams should be worried about and I know we’re all eager to get going.”

Ladd, who grew up in Kent Bridge, Ont., split his time growing up watching the Spitfires, London Knights and Sarnia Sting. He made a point of crediting Spitfires assistant coach Mike Weber, an OHL graduate and former NHL blueliner, with contributing to the development of Windsor’s back end.

“Webby is a really good coach,” he said. “He played pro so he knows what he’s doing. He knows what he’s talking about and he knows all the new stuff and has connections. He works probably 95 percent of the time with us after practices and we do stuff with him whether it’s focused on shooting, working the line or working on improving our communication. It’s really paying off for us.”

With the Michael DiPietro era in the rearview mirror, a new general manager in Bill Bowler settling into the front office and a new majority ownership group operating the franchise, the Spitfires enter a fresh chapter at mach speed.