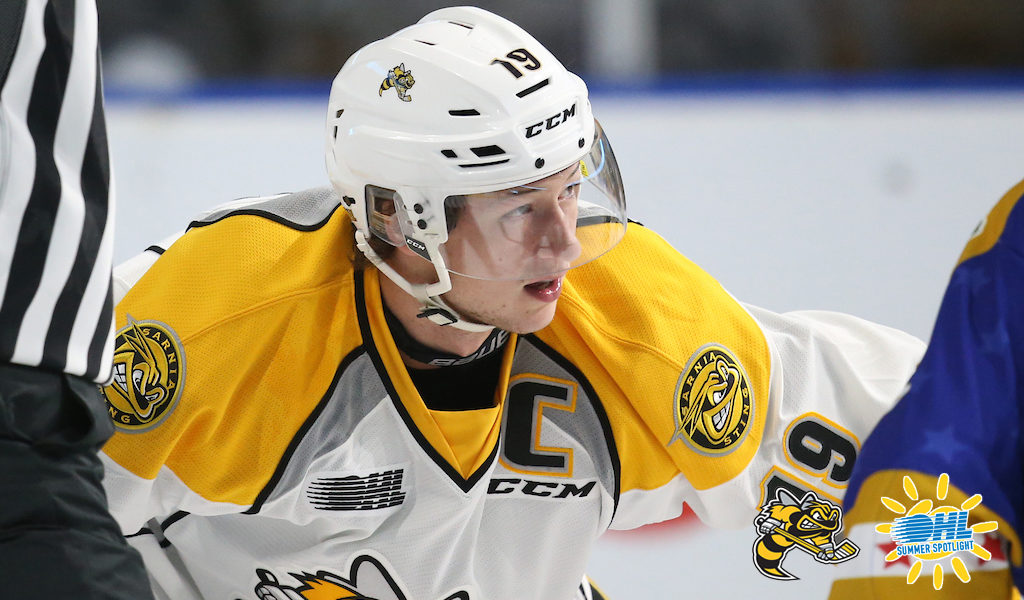 Ryan McGregor has played alongside a number of elite players in his time with the Sarnia Sting. Now it’s his turn to take the reins.

A former teammate of such names as Jakob Chychrun, Pavel Zacha, Travis Konecny and Jordan Kyrou, McGregor is set to return for a fifth season in black and yellow, with another full campaign poised to place him atop the Sting franchise games played list.

The Burlington, Ont. was a sixth round pick of the Toronto Maple Leafs in 2017 and got a look from the big club in a four-game audition with the AHL’s Toronto Marlies last spring before going unsigned. Now McGregor is ready to push past the feeling of disappointment and earn himself a new opportunity.

“The outcome with Toronto was tough,” he admitted, “but I’m very optimistic about the coming season and I’m excited to be back in Sarnia where I can play my game and am able to lead a great group of guys.”

McGregor, who will attend camp with the Columbus Blue Jackets in September, has been a fairly consistent presence up front in Sarnia where he put up a career-high 77 points (25-52–77) in 61 games last season. His game goes well beyond putting up offensive numbers as he provides head coach Derian Hatcher with a solid penalty killing option and can play in just about any situation.

“He’s been everything and more that we hoped he would be when we drafted him,” said Sting general manager Nick Sinclair. “His ability to take the reins of leadership with our club has been tremendous. He’s a real intelligent kid with natural leadership qualities and he’s done a lot for the younger guys in our lineup.”

On an individual level, McGregor has set his sights on a pro contract. He’s put in a lot of work this summer to get physically stronger in order to better control the puck and battle for space down low in the offensive zone, an area of his game he’s been trying to address.

“I really learned through my few games in the American Hockey League that I need to be more of a dominant force on the puck, and that comes with adding strength,” he said. “I feel like my body has taken on weight better this summer than it has in the past so I’m coming into camp feeling strong and ready to go.”

The Sting, who added another veteran forward in rough-and-tumble winger Sam Bitten from the Ottawa 67’s this week, have tremendous confidence in McGregor and his ability to be an impact player in all areas of the game. He’ll be one of the oldest players in the league this season.

“I try to say this without too much bias, but he might be the best two-way forward in the league,” said Sinclair. “You just look at what he does from night-to-night. He plays against the other team’s top line almost every shift, he’s always on the ice in the final minute in a close game, he plays on our top power play and penalty killing units, he does it all.

“He put up close to 80 points last season being one of the best defensive forwards in the league, so we expect he’ll have a huge year coming back and will be an elite player in the OHL.”

McGregor, who took the third-most faceoffs in the league last season despite missing seven games, can be certain he’ll see big minutes down the middle for the Sting in 2019-20.

“My time in Sarnia has been outstanding, it’s a great place to play,” he said. “I’m looking forward to putting the Sting jersey on for another season and representing a great city and a great franchise.”