OHL 20 in 20 Summer Spotlight: Stranges a star on the rise entering sophomore season 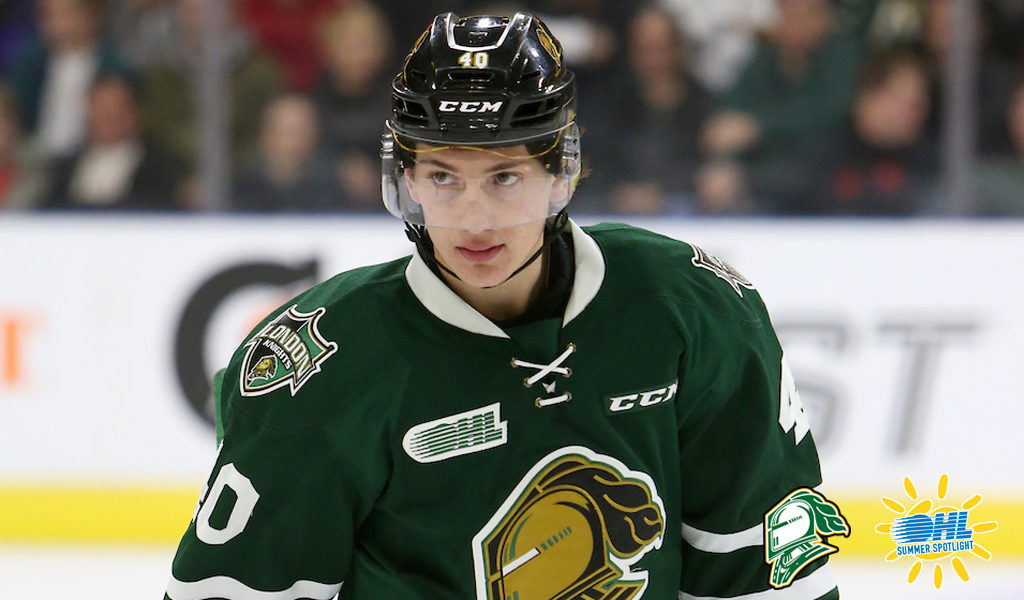 Antonio Stranges showed flashes of something special in his rookie season with the London Knights. Now the 17-year-old who cites former Knights superstar Patrick Kane as his favourite player is looking to bring that same level of excitement to the Forest City in his NHL Draft year.

Stranges, who recently took the social media world by storm with a sensational shootout deke at a summer hockey camp, grew up a fan of the OHL having watched his hometown Plymouth Whalers throughout childhood. Now he’s a member of their former green nemesis, and loving every minute of it.

ANTONIO STRANGES ARE YOU KIDDING ME?! #2020NHLDraft pic.twitter.com/KNkffG32SF

“A lot of the times London came to town they had more fans than the Whalers did, so when I got drafted by London I knew I was in for a lot of fun with a great fan base,” he said. “Year one was fantastic. I made a lot of friendships and there’s really nothing like playing at Bud Gardens every Friday night. It’s an NHL atmosphere and the fans really get behind us.”

The 21st overall pick of the 2018 OHL Priority Selection, Stranges showed quick hands and good vision in his 16-year-old season, carving out a respectable amount of ice time in a forward corps that consisted of several veterans. He finished the campaign with 34 points (13-21–34) over 66 games and saw time on the second power play unit at points during the season.

A look back at many of Stranges’ goals and assists reveal a player who is capable of doing things at high speed and is able to stay calm and collected with the puck in traffic.

“There’s a lot of ‘wow factor’ in Antonio’s game, no question,” said Knights associate general manager Rob Simpson. “He’s the kind of player that brings the fans out of their seats and he was able to do that on a number of occasions even as a 16-year-old.

“He’s got a really quick stick and I know he’s worked on trying to apply that to the defensive side of his game as well, whether that’s  stripping pucks off defenders or forwards in the defensive end or in the neutral zone and just being a hard player to go up against.”

Stranges’ skills were so impressive during his rookie season that Knights head coach Dale Hunter turned to him in the shootout on four different occasions, resulting in three game winning goals. It didn’t take him long to adjust to the OHL pace and make an impression on the men behind the bench.

“I thought I made the jump pretty smoothly,” he said of his first few weeks in London. “The games are a lot faster than what I’d played the year before, but I had worked hard over the summer to get myself ready. I watched a lot of video over the course of the season and I did a lot of early positional work that got me into my comfort zone by time the home opener rolled around.”

Stranges, who has a twin sister and enjoyed watching the Whalers’ Sonny Milano during his 2014-15 stint in Plymouth, says the highlight of his rookie season was the wealth of knowledge and information he gained by way of playing with veterans such as Evan Bouchard, Alex Formenton, Adam Boqvist and others.

“Just watching them from the bench, I learned a lot,” he said. “Just the little things they do on the power play, on breakouts or on zone entries that make that little bit of difference that can affect the outcome of a play five or six seconds later was impressive and it helped me really appreciate their abilities.

“Being around guys like that on and off the ice makes you a better, more mature hockey player.”

Tape-to-tape with some sauce 👌

Even @dunkley09 can’t believe the pass he got from rookie @AntonioStrange3 to open @GoLondonKnights scoring in win over Niagara. pic.twitter.com/uktwVowty5

With the speed to play alongside arguably the OHL’s quickest competitor in Liam Foudy and the smarts to work with Washington Capitals first round pick Connor McMichael, Stranges will undoubtedly be one of London’s biggest offensive weapons in the coming season while giving Dale Hunter a crafty shootout option off the bench.

Fans who didn’t catch a glimpse of Stranges during his rookie season can expect to see him on highlight reels in the months to come.