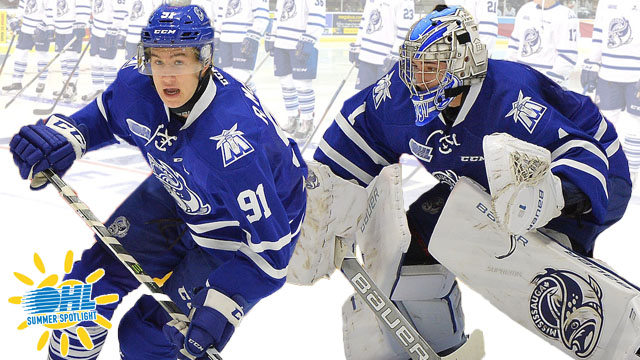 The Steelheads have become a prospect pipeline in the heart of the GTA as head coach and general manager James Richmond’s emphasis on skill development is equipping his players for success.

Fleet-footed forward Ryan McLeod, netminder Jacob Ingham and newly acquired rookie defenceman Merrick Rippon are a few of the big names up for grabs this season in the blue and white, making Mississauga a popular scouting destination for a third straight year.

“The kids are easy to work with because they’re highly motivated,” said Richmond who enters his third season with the organization after serving in a player development capacity with the Los Angeles Kings.

“Our attention is on skating and skill development every morning as opposed to a focus centred more on systems that a lot of teams employ,” he noted. “Skating is a big focus because that’s what a lot of the game is about now – being strong on your skates and making plays at high speed. The kids all want to get better and they work hard at these things.”

After recording 42 points (9-33–42) in 68 regular season games, McLeod took his game to the next level, recording 20 points (5-15–20) in as many playoff contests as Mississauga fell to Erie in the Rogers OHL Championship Series.

“It still stings to think about it,” he reflected. “A few wins and we are OHL champions. It gets the fire going for everyone coming back this season. We want to get back there and get the job done.”

While older brother Michael is off to training camp with the New Jersey Devils in a bid to earn a roster spot out of the gate this season, Richmond predicts big things in store for the younger Ryan, who finished on a high note last spring after playing alongside his older brother and overage winger Spencer Watson.

“He just keeps getting stronger,” said Richmond. “He’s really put his time in off the ice and he’s been out skating a couple times a week throughout the summer. His legs are massive right now and I’m really looking forward to seeing what he brings at our training camp in a couple weeks.”

While McLeod’s been busy in the gym, 17-year-old goaltender Jacob Ingham has had an eventful summer of his own.  He attended Hockey Canada’s Program of Excellence Goaltending Camp, then battled for a spot on Canada’s Summer Under-18 Team falling short of the final roster that eventually won gold at the Ivan Hlinka Memorial Tournament in Slovakia and the Czech Republic.

Work through adversity & let your ability take over. Congrats on your rookie season @JakeIngham

Ingham was among the league’s top goaltenders in the second half last season, going 13-1-0-1 with a 1.96 goals-against-average and a .934 save percentage after January 1st. He was the Vaughn OHL Goaltender of the Month for January and was also named to the league’s First All-Rookie Team.

“He was disappointed with missing out on the Ivan Hlinka tournament,” said Richmond. “I was quick to remind him that the fact that he is in that top tier of Canadian goaltenders in his age group is an accomplishment in itself. If anything I think this will motivate him towards trying to make the World Junior team a couple years down the road.”

The Barrie, Ont. native, who was the first goaltender taken in the 2016 OHL Priority Selection, has found a valued mentor in Steelheads goaltending coach Ryan Daniels, a former fifth round pick of the Ottawa Senators in 2006 who played parts of five OHL seasons with Saginaw and Peterborough from 2004-09.

“He (Daniels) has been great for me, just being so relatable and having played in the league not very long ago,” said Ingham. “It’s nice to be able to work with a guy who has been through these same experiences, been through the draft process and knows all the work that goes into it.”

With Matthew Mancina moving on to the University of Prince Edward Island, the ball is in Ingham’s court from the outset this season as he’ll be given every opportunity to lead a highly talented Steelheads team to the promised land.

“He can expect to see a lot of minutes,” Richmond confirmed. “I knew coming out of minor midget that he was a real talent and he got some good exposure as a rookie last season. Jake is a great kid that puts his time in more than any other goalie I’ve seen at the junior level.

“I think he’s motivated and up for the challenge this season.”

The addition of Rippon to the blue line gives the Steelheads another capable left-handed shot who, like Nicolas Hague, is adept at playing the right side and is likely to draw a good deal of scouting attention as he comes off a productive season with the Ottawa Jr. Senators of the CCHL.

The Trout were one of the league’s hottest teams in the second half last season, going 28-7-3-4 from December 4th onward. With a few tweaks to the lineup and a new crop of young talent up for the NHL Draft, the Fish aim to continue their Central Division dominance in 2017-18.