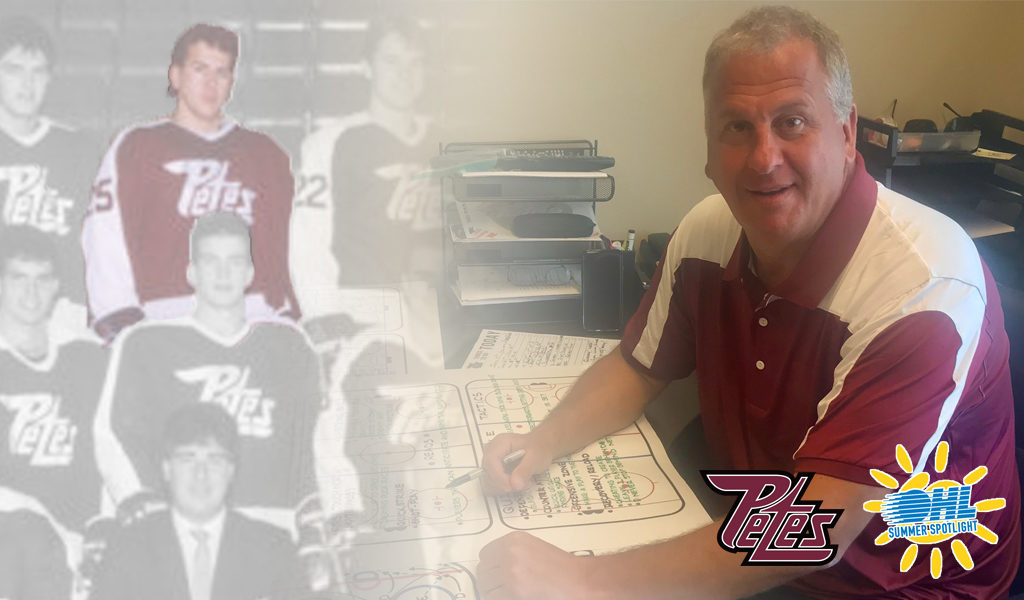 Years of professional hockey have taken Rob Wilson across the globe. Now the former OHL champion is settling into familiar surroundings with a fresh task in front of him.

Wilson, who hoisted the J. Ross Robertson Cup as a member of Dick Todd’s 1989 Peterborough Petes is taking up Todd’s old spot behind the bench at the Peterborough Memorial Centre this fall. His return to the Electric City follows his most recent assignment of three-and-a-half seasons as head coach of the German Elite League’s Nuremberg Ice Tigers where he coached the likes of former NHL players in Steven Reinprecht, Brandon Prust, Tom Gilbert and newly named Kingston Frontenacs head coach Kurtis Foster.

The 50-year-old who is originally from Toronto followed up his four-year OHL career spent between Sudbury and Peterborough playing in a host of UK cities such as Sheffield, Manchester and Newcastle before retiring to step permanently behind the bench in 2009 for head coaching positions in England, Italy and Germany.

“I’ve been fortunate to see so much of the world and that hockey has taken me to these places,” said Wilson of his well-travelled career. “I enjoyed Peterborough so much during my time playing here that I bought a cottage in the area in the mid-90’s, got married here and have two daughters who grew up here. It’s a great hockey community and I have a bit of a special attachment to it thanks to my past time with the Petes.”

Wilson joins the maroon and white following a disappointing campaign as the club missed out on the postseason a year after winning its first East Division title since 2006 before advancing to reach the Eastern Conference Final.

The former defenceman coached Nuremberg to an overall record of 97-43-8 during his time with the club and is eager to get to work as the 23rd coach in the storied history of the Peterborough Petes.

“There’ll be some slight tactical adjustments,” he said, referencing the transition from coaching on an Olympic-sized surface to the signature square corners of the PMC. “You make some small alterations to systems you want to apply, but overall the whole aspect of coaching will be the same – the object of the game doesn’t change on this side of the pond,” he added with a laugh.

Wilson took the time to describe part of his presence behind the bench and laid out some of what he sees as the defining pillars entering the next chapter of Petes hockey.

“Some people might call me a hard coach,” he noted, “but I think a majority of the guys who have played for me would say I’m hard but fair. I expect our guys to compete, go to the dirty areas and play with a controlled edge.

“I think we’ll play really quick, we’ll be a fast team and we’ll transition the puck quick. I’ve had a great response from the players, received some really good feedback from them and I think everybody’s eager to get going.”

With overagers in captain Logan DeNoble, long-time OHL scorer Nikita Korostelev and blueliner Alex Black moving on and the potential graduation of signed Edmonton Oilers prospect Dylan Wells leaving the crease, Wilson will have a slightly younger group to work with in his first season. The Petes have drafted and developed much of their own talent in recent years, presenting emerging names in Zach Gallant, Pavel Gogolev, Semyon Der-Arguchintsev, Nick Robertson, Cole Fraser and Declan Chisholm with more opportunity in 2018-19.

“We’ve got some veterans leaving us, but I know our group is pretty excited about some of our latest draft picks and we have some guys here looking to take a step forward,” said Wilson of the work ahead. “These guys have a tremendous opportunity to play in a great hockey town for an organization that has accomplished some pretty special things when you look back through history.

“Right now we’re like any other team in August, we feel great,” Wilson concluded, “but the work has only just begun.”